The Bureau of Labor Statistics delivered a blowout jobs report on Friday. Headline chasing algorithms and investors responded by snapping up stocks. They also sold some gold and silver futures, driving prices lower on the day.

To Wall Street cheerleaders, it looked like the stock market correction might be over and precious metals would be headed out of fashion, once again.

It looked like something else to anyone who read past the headlines. What a Potemkin Village the markets have become!

We cover phony markets a lot here, and we hate to seem repetitive. It is just hard to imagine gold and silver prices breaking out of the malaise of the past several years without markets getting free of the control of the price rigging banks and the central planners in Washington.

Gold and silver are honest money. But they won’t be fairly priced for that virtue until investors start trading for it in honest markets. For frustrated gold bugs, this is THE issue of the day.

The Friday jobs report looks suspiciously like a propaganda piece. We know officials in Washington are anxious to stop the bleeding in the stock market. They want Americans to believe all is well and they aren’t above intervening.

Steve Mnuchin, the Treasury Secretary, called bank CEOs and members of the Plunge Protection Team before Christmas with concerns about the plight of stocks. By amazing “coincidence,” the DOW had its largest ever single day point gain ever on the Wednesday after Christmas.

Last week, the BLS issued its key monthly jobs report and the headline job creation number was nearly 70% above the consensus estimate. It was a huge beat and the S&P 500 rallied 3.4% on Friday when the news hit the wire.

Headline scanning high frequency trading machines and investors who can’t be bothered with the details reached a snap conclusion: The U.S. economy is vibrant and no stock should go unbought. Those who like details and anyone inclined to question government statistics saw a different picture. Here it is, compliments of Zerohedge: 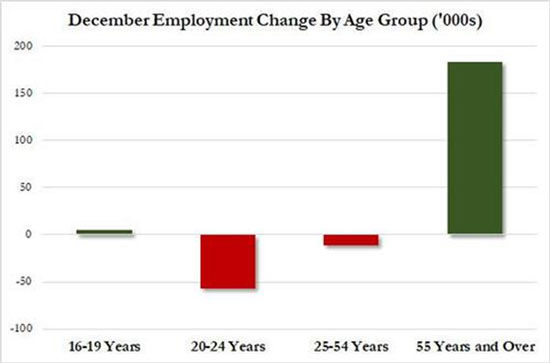 Virtually all of the jobs created were for people 55 years and older. A small sliver went to kids of high school age. Americans in the prime working years between 20 and 54 lost jobs. The shift toward low-wage and part time work is accelerating, and full-time employment for working age people is on the decline.

Skeptics think the Bureau’s numbers cannot be trusted. The timing of the blowout report does look a little fishy.

The news came just in time to save stock indexes from another dismal week. We also know official economic reports are always full of tricks, such as “hedonic adjustments” and “birth/death” models.

Nobody at the BLS has offered a reasonable and healthy explanation about why retirement age people would suddenly be surging back to work. Their report certainly does smell.

If government statisticians are tweaking the data to signal the U.S. economy is stronger than it really is, then most investors aren’t getting an accurate story.

Either way, people who saw Friday’s superficial jobs number and decided to buy stocks or sell precious metals may come to regret it.