THE SILVER PRICE & BROADER MARKETS: How Will They Trade This Week? 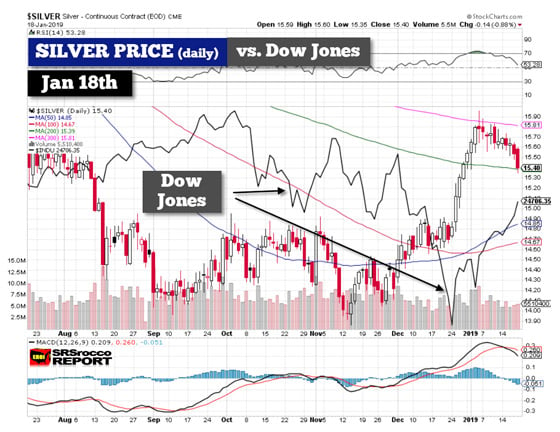 But, I do believe we are going to see a peak in the Dow Jones Index and broader markets very soon, likely this week. As I mentioned in a previous video update, the Dow Jones will probably hit resistance at the 12 Month moving average (MMA) of 24,875 before the end of January and will head down by the end of the month and continue the same trend lower in February: 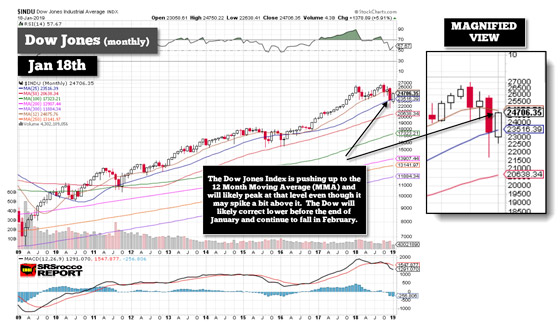 So, if I am correct that the broader markets will begin to sell off, then the gold and silver prices will start moving back higher. Of course, there are no 100% guarantees with technical analysis, but we can check the markets and see how the price actions traded over the next two weeks. 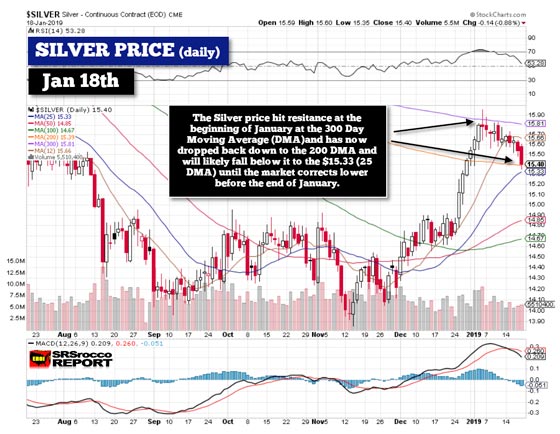 However, the silver price could fall below that $15.33 level to $14.85 (50 DMA-Red line) before reversing when the broader markets peak and decline sometime in the next week or so. Because the broader markets are becoming extremely overbought and now a high risk, shown in the Sentiment Trader Report I receive daily, a reversal lower is soon to take place: 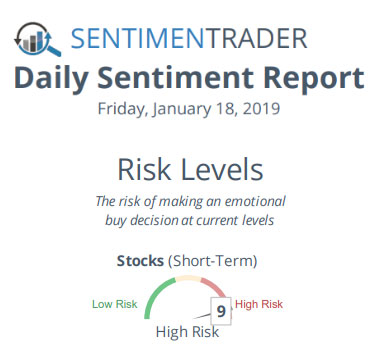 When the broader markets begin to sell off once again, in what I believe is an ongoing BEAR MARKET (unless Central Banks step in with trillions of new QE), the precious metals prices will continue to disconnect and move higher. Thus, I believe silver will show a reversal sometime this week or next week at the latest and start moving higher to the $16.40 range shown in the monthly chart below: 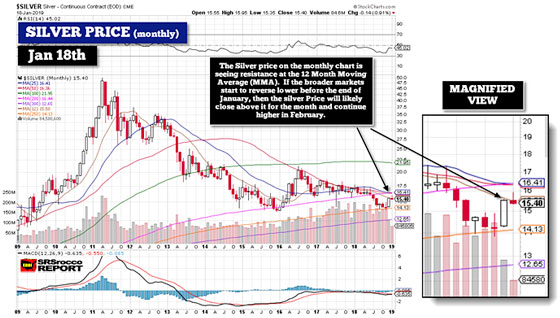 Interestingly, the silver price in the monthly chart is right up against the 12 Month moving average (12 MMA –Brown line). In December the silver price went right up to it (large white candlestick) and is attempting to push above it.

If my analysis is correct, then I do believe the silver price will push above the 12 MMA by the end of January and then start trading above it in February as it continues up to the convergence of the three moving averages (25, 50 & 200 MMA), at the $16.40 range.

Lastly, due to the Federal Government shut down, we haven’t had an update of the COT Report for a month now. So, we have no idea the level of Commercial Short positions. However, I do believe the Commercials liquidated some short positions as the silver price has fallen over the past two weeks. If we look at the Sentiment Trader Silver Optix, or sentiment chart, we can see that sentiment is still heading lower, but will probably bottom soon and move back higher with the price. 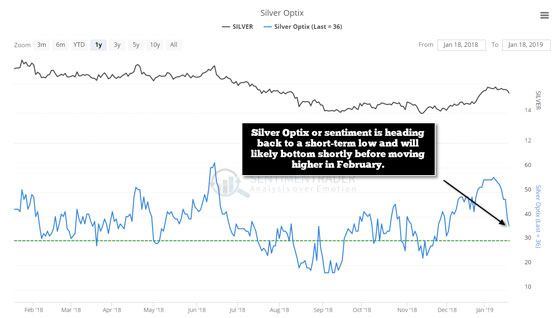 I will do an update at the end of January to see how the markets and silver price traded so we can see if my analysis of the moving averages was correct. If my analysis on a short-term basis is accurate, then we will be able to understand how the precious metals prices will move higher over the longer term.