If you’re puzzled by the magnitude of the stock market correction since late December, you can thank the central banks for the rally. Yes, that’s correct… after the Dow Jones suffered the worst Christmas Eve trading day ever, the massive central bank monetary liquidity helped push the index up 20% from its low over the next two months. 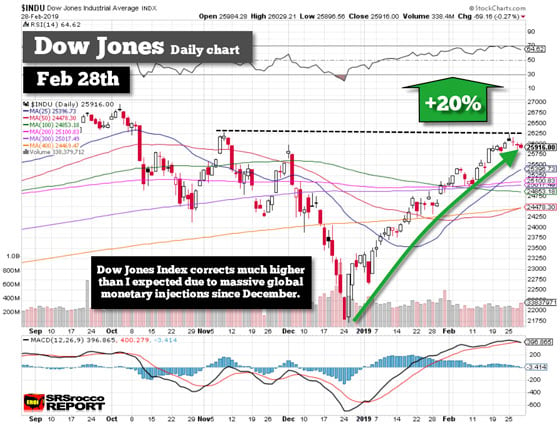 Of course, the markets were due for a reversal as nothing goes down in a straight line, but to see the sort of buying in the face of negative economic news and lack-luster earnings means that the inevitable CRASH will be even bigger when it finally arrives.

Now, according to the article, Back To Fundamentals, Daniel Lacalle stated the following in regards to the markets:

In 2018 we saw the first drop in global liquidity in more than a decade, and that generated significant losses in financial markets. Since the end of December stock markets have rebounded strongly because the data, although poor, is not as bad as feared, and mainly because the Federal Reserve changed its tone on the number of rate hikes, the ECB announced that it would be much more accommodative and the Central Bank of China introduced the largest injection of liquidity in five years.

In fact, between December 26 and February 15 we have seen the largest injection of liquidity in the markets of the last two years, bringing the global money supply to record levels.

The two key points stated above were that a drop in global liquidity in 2018 generated significant losses in the financial markets and the largest injection of global liquidity from December 26 to February 15th brought the money supply to a record level and pushed global stock markets back higher. This can be clearly seen in Lacalle’s charts: 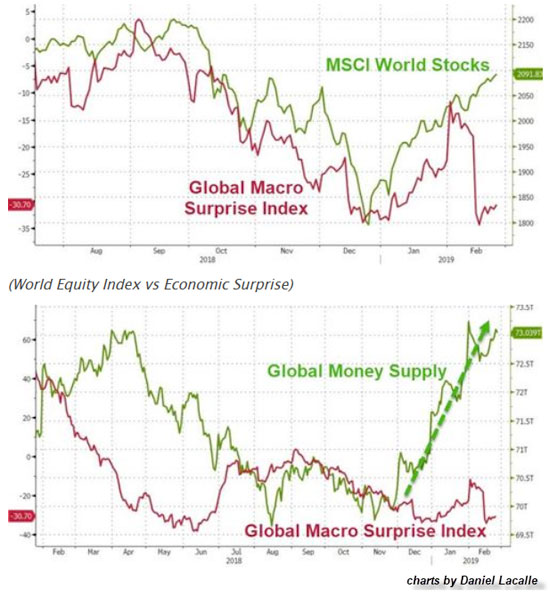 Thus as the global money supply jumped by more than $3 trillion within two months, the global stock markets enjoyed one hell of a rally. But, how far can money printing go if the fundaments are lacking? Well, that’s a good question. Now, if we look at another chart comparing the S&P 500 to forward earnings per share, we can see another fundamental disconnect.

This chart and quote below came from the Zerohedge article; The Profit Party Is Over: Q1 Earnings Growth Crashes, Set For Biggest Drop In 3 Years:

As the chart above clearly shows, the Fed’s dovish flip has made earnings largely irrelevant for the market’s near term direction, as Powell’s stated intent to pause hiking and ostensibly slow the Fed’s balance sheet shrinkage has taken priority over everything else.

Expect even more market upside irrelevant of what historicals companies report or what guidance they deliver. 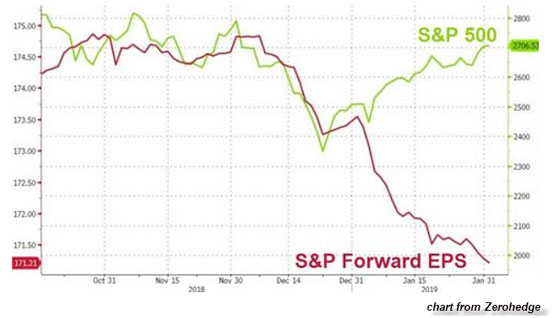 So, the insanity of higher stock prices will likely continue for a while until the markets are no longer able to ignore the increasingly lousy economic data.

With that being said, technical analysis still does play a part in providing clues as to how the market will play out. While my forecast of the Dow Jones Index to peak at a lower level, was incorrect, I had no idea of the massive central bank money printing that would start of Dec 26th… LOL. Regardless, don’t be fooled that the central banks can fix anything. All they are doing is propping up asset prices for a while longer.

To get an idea just how screwed up the markets have become, let’s look at XEROX. Xerox is a well-known name in the market. During the market sell-off, Xerox’s stock price fell 36% in less than two months: 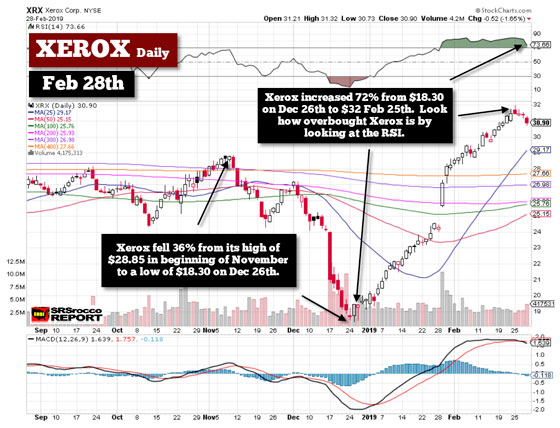 Xerox’s share price experienced a waterfall from nearly $29 at the beginning of November to a low of $18.30 on December 26. However, due to the Fed’s “Dovish Market Policy” and the massive central bank monetary injection, Xerox’s stock not only made up for all of the losses, but it also added another $3+ to gain 72% in a cool two short months.

Now, if we look at Xerox on a weekly chart, the movement is even more extreme: 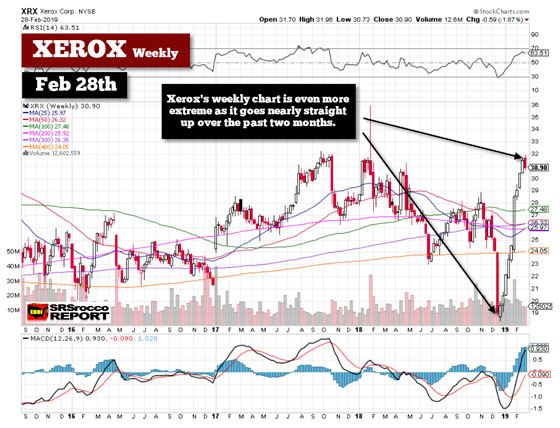 As we can see in this weekly chart, Xerox’s share price has gone nearly straight up. Of course, nothing changed all that much at Xerox for its stock price to lose more than a third in a short period and then bounce back 72% in the same amount of time. According to the company’s data, their fourth-quarter earnings were better than Wall Street expected, but really nothing to write home about: 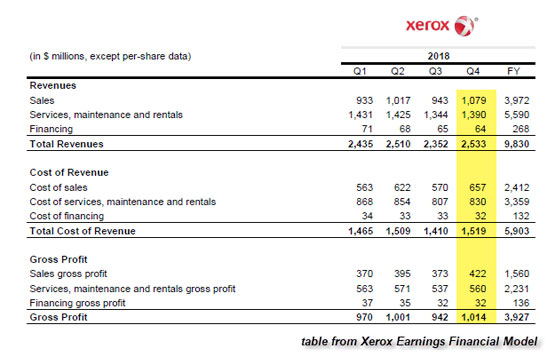 Interestingly, Xerox’s Q4 2017 results of $2,747 million in revenues and $1,108 million in gross profit were higher than the last quarter of 2018. So, this goes to show that fundamentals don’t play much of a role in determining the value of stocks. However, as I have mentioned, the technical analysis still provides us with a guideline, even though market rigging and intervention by central banks is taking place full speed ahead.

Xerox is still extremely overbought and will have to experience a selloff shortly. Again, nothing goes up or down in a straight line. Furthermore, while I thought the Dow Jones Index might show some sort of a correction lower after reaching 26,000 this week, it looks as if we are going to see another BIG GREEN DAY today.

Lastly, even though the markets could go even higher for a while, don’t forget that central bank market intervention will only make the crash much worse when it finally arrives.