When war breaks out, when the power grid goes down, when the banks fail, when the U.S. dollar collapses, when social unrest spreads, when the stuff hits the fan… will you be prepared? 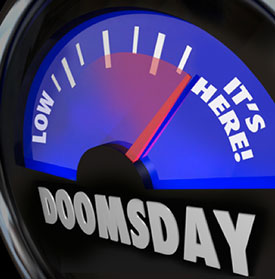 The Bulletin of the Atomic Scientists maintains a “Doomsday Clock.” For 2019, it “sets the Doomsday Clock at two minutes to midnight—the closest it has ever been to apocalypse.”

The Atomic Scientists are issuing “a stark warning to leaders and citizens around the world. The current international security situation—what we call the ‘new abnormal’—has extended over two years now.

If you don’t have an underground fallout shelter in your backyard… don’t worry. The likelihood of your neighborhood being the target of a nuclear attack is slim.

At the core of any practical prepping strategy is making sure your household has backup supplies of life essentials. At the top of the list is bottles of water. Also aim to keep a three-month backup supply of non-perishable foods.

From there, you’ll want to make sure you have at least two first aid kits, batteries, emergency tools and equipment, a portable power generator, firearms, and ammunition.

As for your finances, well, the ultimate SHTF money is gold and silver. The value of physical precious metals will hold up through whatever war, financial crisis or political chaos may come in the years ahead.

The Best Coins for SHTF

As an individual who is building up emergency reserves, you want to make sure the particular gold and silver bullion products you hold provide you with all the versatility and flexibility you may need during a SHTF scenario.

In a SHTF event, the melt value of your coins may be all that counts. Don’t expect to get any premium for “collectible” or “proof” coins in barter transactions.

For that and a whole host of other reasons, you shouldn’t buy those types of coins in the first place (unless you acquire them near their actual melt value). It makes more sense to hoard non-numismatic, widely recognized bullion coins and rounds in common sizes.

A bag of pre-1965 90% silver coins is a good way to get widely recognized fractional silver. These circulated dimes, quarters, and half dollars are great for small-time transactions and are often as cheap or cheaper to buy than pure silver products.

However, during times when premiums for these no longer minted coins are elevated, you may be better off buying half-ounce, quarter-ounce, or tenth-ounce silver bullion rounds instead.

You can round out your emergency money metals stash with some copper bullion – rounds or copper pennies minted in 1982 or earlier. That way, you’ll never have to part with more silver than you need to in order to complete a transaction.

It’s Hard to Put a Price of Peace of Mind

Even if you think the chances are small that you’d ever need to use precious metals for barter, there’s no harm in acquiring the ability to do so.

You’ll have some hard assets to your name that will offer long-term inflation protection and can be sold into a highly liquid market for cash whenever you want to ring the register.

In the meantime, being prepared will give you peace of mind. You’ll feel more confident and rest easier knowing that you have a Plan B in place and some proper tools to put it into action in the event of a SHTF scenario.

Whether it’s a Fed-induced financial panic, or a terrorist attack that knocks out the power grid, or a cyber attack that cleans out the banking system, or something else entirely…. whether it happens tomorrow or far out in the future…it’s better to prepare decades too soon than a minute too late.