For now, however, palladium prices remain in a long-term uptrend above the bullishly aligned 20-week and 50-week moving averages – and physical supply remains tight.

Regardless of whether the palladium market recovers to new highs in the weeks ahead, it is quite possible that it has peaked in relative strength terms versus its sister metal platinum.

A few days ago, platinum traded at a historically large discount of almost 50% versus palladium. That discount narrowed considerably last week with platinum managing to post a slight gain in dollar terms.

Another relative strength extreme that may be near a turning point is gold trading at 85 times the price of silver. 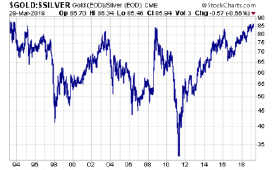 The gold:silver ratio currently trades at 85,
near the top of its 26-year range.

The gold:silver ratio ran up to its highest level since the early 1990s in last week’s trading, rendering silver a potential once-in-a-generation bargain opportunity among the money metals.

Silver is also deeply discounted versus the stock market. Last September, silver sunk to a 15-year low versus the S&P 500.

The tremendous strength in equities and bonds in the first quarter of 2019 makes silver once again stand out as extremely undervalued versus financial assets. (Browse silver products here.)