Silver Sentiment: Is It (Your) Friend or Foe?

The gold and silver bull markets have been on a roller coaster ride for almost two decades. Gold came to life in 2000, with silver crawling along between $4 and $5 until late 2003, making its first print above $10 in March 2006.

The next two years saw the last part of a 400% up-move for those who "kept the faith," before silver dropped below $9 during the 2008 global financial meltdown.

A blogger announced he had sold his house to buy silver and advised others to do the same.

Holding physical metal was no fun, but some did have the courage to buy more, scale down. Mining stocks were a devastating proposition, with 80%-90% declines the norm.

The 2016 run up shocked just about everyone... Weeks and weeks of prices moving up almost in every trading session. Until June, that is. Then a two-year decline wiped out most of those gains and kicked to the curb more than a few long-term silver stackers who finally threw in the towel.

This writer understands how they – and you – feel.

I've been involved in the silver market since 1972 and have pretty much seen it all. I experienced it dropping from $50 an ounce in January 1980 and waited for 22 years to see it begin a new bull run from below $5 an ounce. I remember the euphoria of the near-$50 print in 2011. And, like everyone else, I've felt the pain since then.

I think the most common reason that a plan fails, or doesn't even start, is due to not carefully working through the OODA Loop – Observe, Orient, Decide, and Act.

But there's another powerful factor standing in the way of success for so many investors.

It has to do with allowing Sentiment to drive investment decisions. In other words, when the overall market tone is negative, there is a tendency to either wait until the coast is clear, or until some magical "lower price point" arrives on the charts.

The problem is that instead, either the price moves up to where you thought it would – for a bigger risk and lower profit potential – or if it does drop, you decide to wait for even lower prices. Either way, it almost guarantees that you won't act.

The reality is that going against sentiment is a great way to lower risk and increase the odds of a bigger payout down the line.

There's Power in the Rule of Three

Since metals' prices move counter-cyclically to most other financial categories like the stock market and bonds, your Insurance portion is meant to be held indefinitely, helping offset a major decline in another category.

Hold the Investment portion through what you believe to be the majority of the secular bull run.

For example, when silver topped in May 2011, you might have decided to sell the Speculation component, which may have been purchased at, say, $20... giving you a 100% profit. Then, over the next seven years, you could have bought it back into declining prices at perceived chart support levels.

The psychological benefits of such a strategy should not be underestimated. Some of those who gave up the ghost during the last year or so may have held onto their silver for two or three decades, and never sold an ounce!

If you never quit, you'll never know how to... Never, never give up. In that last second, you may get the card that you needed.

So don't quit on Silver. Run through the OODA Loop again. Rework your Plan. Add another tranche of bullion. Get some gold too.

Read (or re-read) David Morgan's and my book, Second Chance: How to Make (and Keep) Big Money from the Coming Gold and Silver Shock-Wave.

And get a copy of Bob Moriarty's new book on Amazon, Basic Investing in Resource Stocks: The Idiot's Guide. These two titles can take you to – and keep you at – the next level.

Fishing for Success, Safety and Profit? Go Against Sentiment!

I was cold and wet, casting flies in 60 mph winds for giant Rainbow trout on Argentina's remote Jurassic Lake. 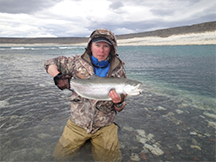 The day before, while releasing a 10 pounder from a rock ledge, a wave and high winds had blown me into the lake. The guide somehow grabbed onto my vest so I could claw my way back up the side, breaking 8 fingernails in the process. Talk about negative sentiment!

The next and last day of the trip was drawing a blank. Finally, our guide said it was time to go, and my fishing partner started taking down his rod.

But I made one more cast, and after a hard strike and a wild fight, I released a 15-pound Rainbow – my largest of the trip. All because I was willing to "push through the doubt" and take that last cast. 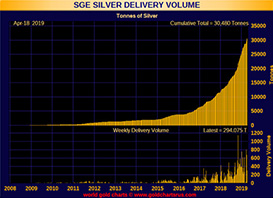 Silver is building up a head of steam for its next big run. India and China's buying continues to increase, even as several big silver miners fight declining production.

Don't be fooled by the market's negative sentiment. Stay in the Game, and take one more cast.

Sell a little on the way up.

Decide you will claim a seat at the Winners' Table in a few years, when this mega-trend has run its course. I'll see you there...