Can Markets Still Drop Sharply... or Is the Fed Invincible?

The financial markets feel as if they are totally controlled. Zerohedge recently made an observation that pretty well sums up the situation, in the context of trade: The quickest way to settle the trade war is for stock markets to drop significantly. Much lower prices will put pressure on President Trump to end the standoff.

The problem is neither the president nor the Fed have the stomach for lower prices. Investors are certain they will act quickly to prevent any major bear market. 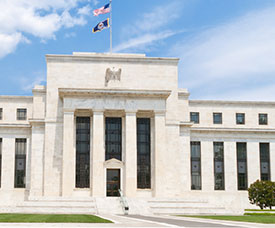 The term “Fed Put” or “Greenspan Put” was coined more than 20 years ago when Alan Greenspan was Fed Chair. His successors have only become more aggressive when it comes to making sure markets never drop too far, particularly after the 2008 Financial Crisis. Witness the recent about-face by the Fed after the sell-off in stock prices late last year.

Today, one ramification of the Fed’s constant intervention may be a deepening trade war with worsening economic fundamentals – and neither problem will be reflected in stock prices.

All that matters when it comes to stock prices is the Fed won’t allow them to drop. Equity investors sure don’t seem bothered by the fundamentals.

The dislocation related to tariffs are starting to set it in. President Trump just announced $16 billion in aid for farmers devastated by the drop in agricultural exports to China.

GDP growth has been often missed expectations and forecasters expect it to slow. Last week’s durable goods orders were a major disappointment.

Geopolitical events, such as rising tensions with Iran and the drama in Europe over Brexit, don’t seem to be budging markets.

Frustrated metals investors wonder if fundamentals will ever matter again.

If the central bank and Trump are going to keep risk (and demand for safe haven assets) permanently off the table, why bother buying or holding gold?

It is worth examining whether the central planners will ever lose control. They certainly have a lot of firepower at their disposal.

There are indeed some powerful reasons not to “fight the Fed”:

As powerful as the Fed may be, it is important to remember a few key points. Fundamentals do matter:

It certainly is aggravating to make well-reasoned investment choices, such as buying gold, and then seemingly get punished for it time and again.

The alternative, however, is to discard reason and assume Jerome Powell and his cohorts have finally figured out how to lead America to the promised land; permanent economic expansion, and a stable dollar.

Reality will ultimately rule over fantasy.