While silver investment demand in the West continues to remain weak, Indians are purchasing the white shiny metal hand over fist. In just the past six months, U.S. silver exports to India have exploded to record highs. Yes, there is no better way of putting it if we compare how little silver India imported from the United States during the previous six month period.

Furthermore, according to the Metals Focus Consultancy, they forecast even stronger Indian silver demand in 2019 due to rural Indians spending their “Cash Handouts” from the government to assist local economies ahead of the President’s election. How interesting. When Americans receive a government check in the mail, they use it to buy more throw-away crap they don’t need. However, many Indians use it to purchase silver as an investment.

Regardless, the chart below shows just how much silver the U.S. has exported to India over the past six months; 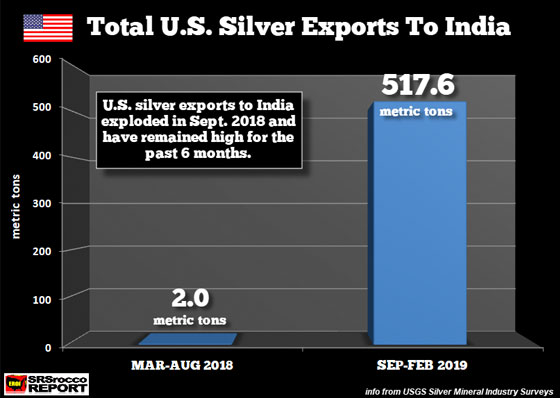 From March to August 2018, U.S. silver shipments totaled a paltry two metric tons. Now, compare that to the 517 metric tons from September to February 2019. Even if we include U.S. silver exports to India for Jan-Feb 2018, it only amounted to 1.2 metric tons. So, as we can see from the data above, there is extremely high demand for silver in India.

Now, if we look at the total annual U.S. silver exports for the past several years, the change in Indian demand is even more striking: 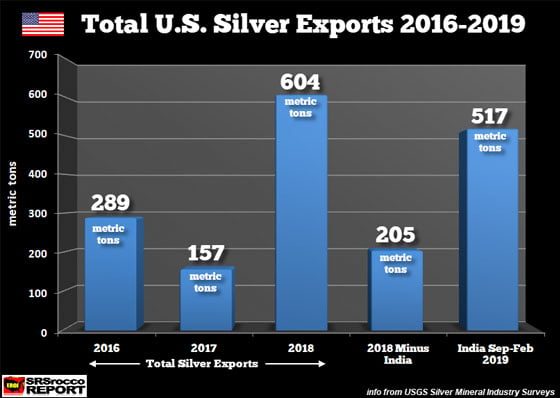 Moreover, the 517 mt of U.S. silver exports to India for the past six months was nearly double the total exports in 2016 and more than triple that of 2017. While it’s true that this huge increase in Indian silver demand hasn’t impacted the price yet, wait until the economy and financial system start to really come apart over the next few years.

Today, as the markets continue to sell off due to more Trade Wars with Mexico, gold and silver are in the green. Even though gold is outperforming silver today, they are doing exactly as I predicted during significant market downturns. And, I believe this is only the beginning of an even greater dislocation between the overall markets and precious metals in the years ahead.