A “perfect storm” is brewing for midwestern farmers. Unending rains have led to the flooding of tens of millions of acres of farmland. The deluge comes on the heels of years of low crop prices. 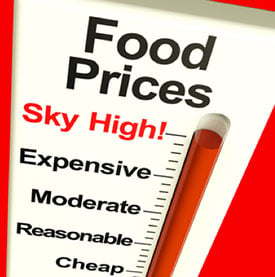 It has the makings of an agriculture disaster on a scale never seen before.

The nation may see a “perfect storm” in terms of food inflation. Prices for some farm commodities figure to be a lot higher in the months ahead as markets adjust to dramatically lower crop yields. This will be coupled with price hikes associated with tariffs on all manner of goods from China and elsewhere.

To top it off, the Fed is signaling a reversal. The next move in interest rates now figures to be lower.

Grain and soybean prices are already on the move. Corn prices began climbing rapidly in early May. Today the price per bushel is 20% higher than a month ago. Wheat prices are 7% above the lows of a month ago, and soybeans are 11% higher.

Chinese tariffs on U.S. agricultural products pushed prices lower earlier in the year. However, the longer-term effect of those particular tariffs may wind up being less than many think. The market for food commodities is global and demand is somewhat inelastic.

More than a billion Chinese need to be fed. What they don’t purchase directly from the U.S. will need to be purchased elsewhere. We can expect to see an increase in American exports to other places.

CPI Inflation Surpassed 3% in Past Year

President Trump increased the tariffs on Chinese imports from 10% to 25%. Americans can look forward to paying higher costs for many consumer goods in the months ahead. The chart below shows recent CPI data through April.

Costco told investors to watch for higher prices on the merchandise they sell in the most recent earnings call. The retail giant recently declared “prices will go up on things.”

Fed Chair Powell is using the tariffs and the prospect of price inflation as justification for changing course. He said last week the central bank “will act as appropriate to sustain the expansion.” He and his cohorts stand ready to combat a weakening jobs market and dwindling international trade by lowering interest rates.

Bond yields are deeply inverted. Historically inversions of this sort have been a dark omen. They often signal a recession and falling stock prices.

Given the central bankers’ obsession with stock prices and ongoing pressure from the Trump administration to avoid any major correction, the Fed moving preemptively to cut interest rates isn’t surprising.

However, it isn’t at all certain that lowering rates now can forestall what is coming. Individuals and corporations have already binged on debt. The growing mountain of borrowed money is weakening the nation’s economic prospects, not making them stronger. 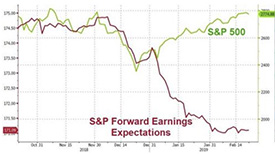 The adjacent chart is telling:

Stock prices are riding upon the “Fed Put.” There is no great earnings strength anymore. Stock investors simply won’t sell stocks because they anticipate the Fed will step in with stimulus.

That expectation is 100% logical given the central bank’s track record. But logic also dictates something else: stock prices will one day reflect earnings reality.

If lowering rates doesn’t work to prop up stock prices, we can count on the Fed to double down by dropping rates again or by finding even more exotic and aggressive ways to stimulate.

This all amounts to bad news for the U.S. dollar and for consumers who will have to contend with higher prices.

But there is a silver lining for precious metals investors…

Concerns over price inflation have been absent from the markets for nearly a decade. Gold and silver markets are heavily reliant upon safe-haven demand as a key driver. With powerful inflationary forces now building, that demand looks like it’s about to surge.