The top primary silver miners in the world saw their production yield fall to the lowest level ever in 2018. Since 2005, the average yield from the top silver miners has fallen nearly in half. And along with rising oil prices, has pushed up the total cost to produce silver by an additional $10 an ounce. So, for those who still believe in the fantasy that it cost $5 an ounce to produce silver, that data shows otherwise.

It has been a few years since I updated the data for the top primary silver miners, but I was quite surprised by how much the average yield declined in the past year. While part of the reason for the decrease was due to the shutting down of the Tahoe Resources (taken over by Pan American Silver) Escobal Silver Mine in Guatemala, several other large primary mining companies also suffered reductions in their average yield.

For example, Fresnillo PLC experienced a significant decline in the average yield at its two largest silver mines, Fresnillo and Saucito: 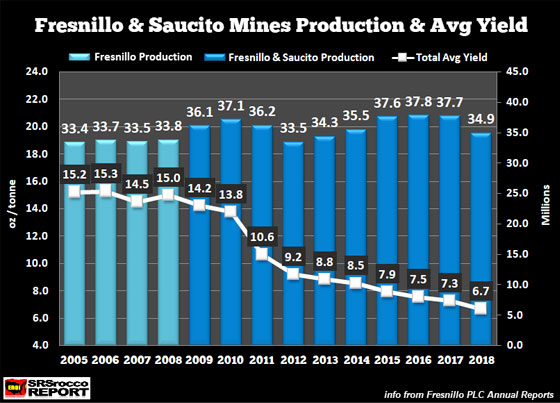 The LIGHT BLUE bars in the chart above represent production and the average yield from just the Fresnillo Mine. The DARK BLUE bars show the total for the Fresnillo and Saucito Mines. The Saucito Mine came online in 2009. For the sake of clarity, the mining company Fresnillo PLC has many primary silver and gold mines. It’s top two primary silver mines are Fresnillo and Saucito, but the company recently added production from its new San Julian operations. And if we include output from the San Julian Operations, the average silver yield for Fresnillo PLC last year was even lower 5.7 oz/t (ounce per tonne).

So, according to the data from the top primary silver mining companies, the average yield fell to 6.8 oz/t last year, down from 7.5 oz/t in 2017: 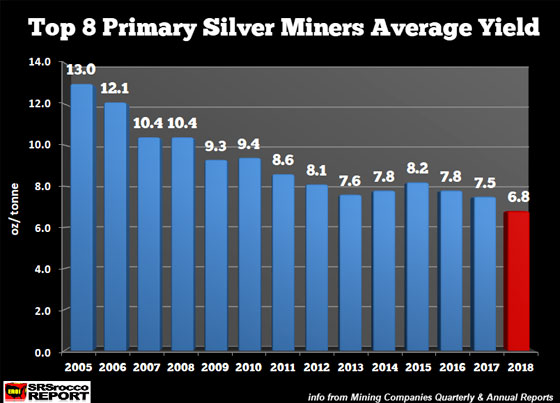 The reason for the increase in average yield in 2015 was due to the ramping up of the new high-grade Escobal Silver Mine. In 2015, the Escobal Mine produced silver at an average yield of 13.5 oz/t. Regardless, the top primary silver miners experienced a substantial decline in average yield last year.

The top primary silver mines and companies included in the chart above:

The Cannington Mine in Australia was one of the largest silver producing mines in the world. In 2005, the Cannington Mine produced a stunning 44 Moz of silver at an average ore grade of 515 grams per ton or 16.5 oz/t. The data in the chart below is shown in grams per ton. To convert to troy ounces, we divide by 31.1. 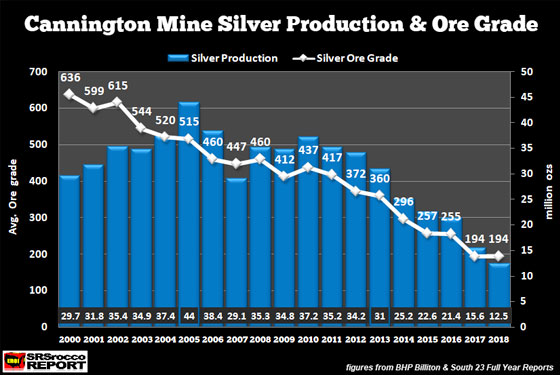 Now compare that to the 12.5 Moz of silver production last year at an average ore grade of 194 grams per ton (6.2 oz/t). So, as we can see, the days of the large primary mines producing 15+ oz/t of silver are long gone. Today, the group has to process nearly twice the amount of ore to provide the same amount of silver than it did in 2005.

NOTE: Total silver production from these eight primary mines and companies was higher than 155.5 Moz, but I excluded several mines that were predominantly gold mines with by-product silver supply. For instance, I excluded Pan American’s Dolores Mine from the data because it is more a gold producer. The Dolores Mine produced 136,600 oz of gold and 4 Moz of silver. Even though 4 Moz of silver is a higher amount than other primary silver mines that Pan American Silver operates, the average ore grade was only 31 grams per ton, or approximately 1 oz/t. So, I excluded these types of mines to focus on higher-grade primary silver mines.

Even though ore grades and yields are declining in the primary silver mining industry, it still produces a great deal of silver compared to other large open-pit silver producing mines like Penasquito. I wrote about this in my recent article, THE MASSIVE 46 STORY TALL STRUCTURE: The Penasquito Mine Tailings Dam. Penasquito, located in Mexico, is a large open-pit polymetallic mine that supplies a great deal of by-product silver. If we compare the Penasquito Mine to the eight primary silver mines and companies in the group above, we have the following: 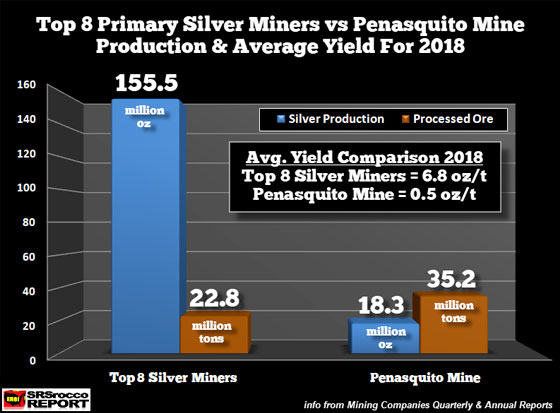 Lastly, when the gold and silver prices finally enter into their next phase of the bull market, many of these primary silver mining companies stock prices will explode higher. There will be very few stocks worth owning during the next financial crisis, and the primary silver miners will be one of the few.