VERY IMPORTANT WEEK FOR GOLD: Where Is The Price Heading?

What happens to the gold price this week will likely set the trend for the foreseeable future. While many precious metals investors disregard technical analysis and key chart formations, you can bet your bottom dollar that large traders and institutions are watching the price action of the yellow metal quite carefully. And if you think that these large traders and institutions don’t believe in market intervention, then you are sadly mistaken.

ROKU, a TV streaming platform company, has seen its stock price surge from $26 to $105 over the past six months. That’s a 300% increase from the December 2018 lows. Why would anyone want to mess around with gold, that may go up or down 5-10%, when you can make triple-digit gains on ROKU? 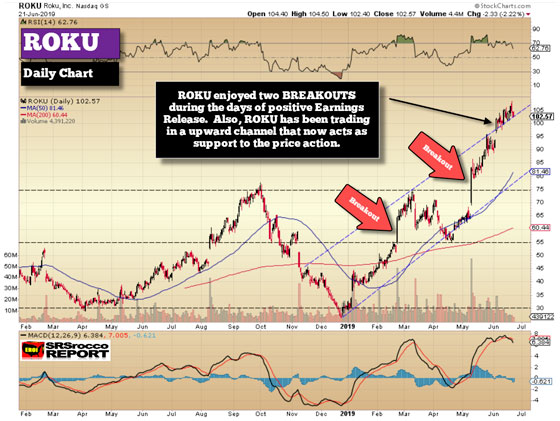 Moreover, ROKU is trading close to 10 million shares a day, the same as the GLD ETF. So, traders, hedge funds, and institutions are focusing on stocks like ROKU because the share price action is providing excellent returns in a very short period of time. It doesn’t matter that the markets are rigged, or that central banks are providing trillions of dollars of liquidity. What matters to those who play in these markets, are the NICE RETURNS that can be made in the “Grand Market Casino.”

While ROKU’s stock is certainly hitting all-time highs, the company still hasn’t made a profit in the past four years. Of course, Wall Street analysts say not to worry because it will take the company 5+ years to be profitable. But what if that fifth or sixth year takes place during the next big recession?? Just look what happened to ROKU’s stock from October to Dec 24th, 2018. Do you honestly believe ROKU’s financials and revenues fell that much to push the stock down by 65% in three months?? No, ROKU’s share got BUSHWACKED because the entire market was in freefall. That is, until the central banks came to the rescue.

Unfortunately, for many investors, ROKU is just another high-tech over-valued stock that will crash along with the markets when the lousy economic fundamentals finally kick in. 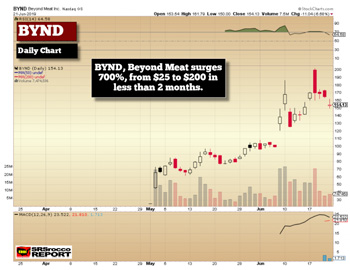 And what about the recent IPO of Beyond Meat (BYND)? The stock price opened at $25 on May 2nd and reached $200 on June 19th, less than two months later. Talk about a COOL 700% return in a lousy seven weeks. Again, why on earth would investors pay attention to the precious metals market when they can get rich on stocks like ROKU and BYND??

These crazy stock prices become even more insane when we compare them to “Real companies.” How does Beyond Meat’s present stock price of $154, based on Q1 2019 total revenues of pitiful $40 million compare to Tyson Foods trading at $79 a share with $40 billion in Q1 2019 revenues? Where is the fundamental logic behind Beyond Meat’s valuation???? There isn’t any. But, the flow of funds focused on high-flying stocks in the market keep investors from paying much attention to gold… up until now.

So, getting back to gold. The problem with many precious metals investors is that they don’t believe technical analysis works in a rigged market. What they fail to understand is that most participants in the market realize that central bank intervention is taking place. It’s not a state secret any more.

However, there is some METHOD to the MADNESS when it comes to the gold price action over the past 40 years. Here is a monthly chart of the gold price going back until 1981: 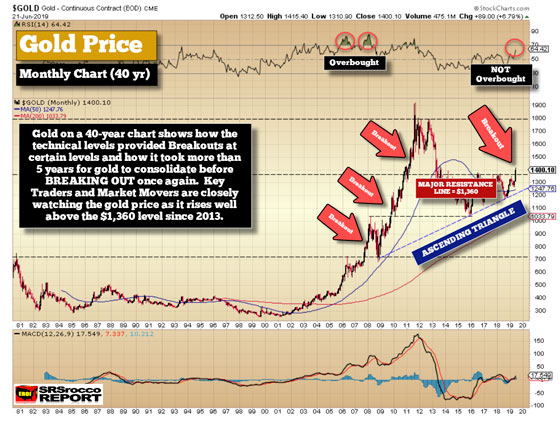 If we look at the 20-year gold monthly chart, we can see some interesting trends: 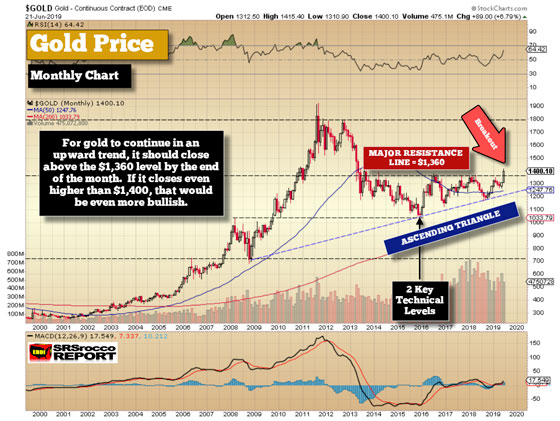 After gold surged to $1,900, like with all stocks, it experienced a typical correction. Normally, stocks will correct back down to prior support-resistance levels. After gold fell back to the $1,350-$1,360 level in 2013, it continued lower to $1,050. Now, once again, there is no coincidence that the gold price bottomed at $1,050 in late 2015 right at the very same level it that peaked in 2008. You can see that black dashed line at $1,050. Furthermore, the Ascending Triangle baseline (blue dashed line) was another bottoming area for gold when both key technical levels converged.

However, the technical $1,050 level where gold bottomed was also based on fundamental data on the gold production cost. At that time, the top gold miners were producing gold at $1,025-$1,100 an ounce. The declining production gold cost was due to the oil price falling to a low of $26 from a high of $110 in 2011. So, technical analysis in the chart also provided a clue as to the bottom in the gold price.

If we look at the weekly gold chart, we can see the Key Technical levels: 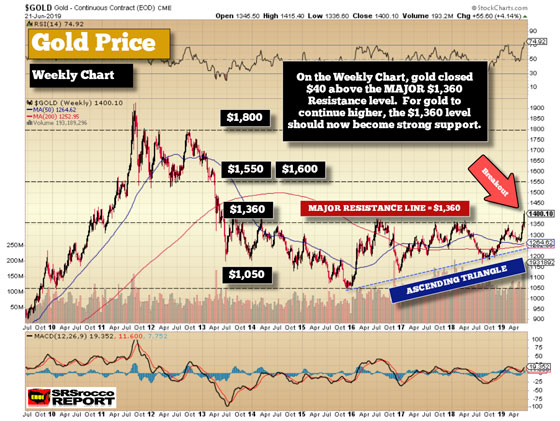 For gold to continue a BULLISH TREND, it will need to close above the $1,360 level at the end of the month, shown in the top two charts. If it closes below that $1,360 level, then it will just take more time for the trend to push above that level for an extended period. But, if we do see continued buying of gold next week, then we will likely be in a new Bull Market for gold.

The last chart is the Gold Daily Chart. It clearly shows how gold shot above that critical $1,360 level: 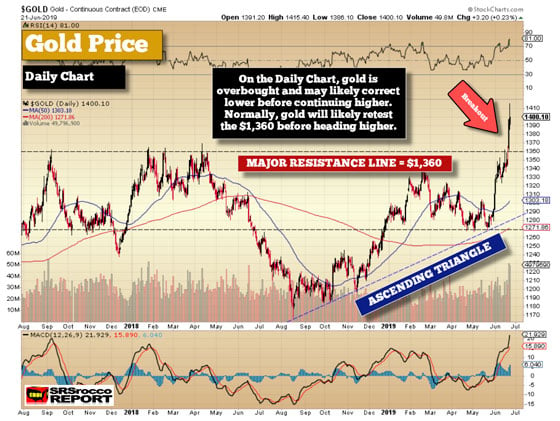 While gold is overbought on the Daily chart (shown at the top right part of the chart, 81 RSI), it isn’t on the first Monthly gold chart above. Even if the gold price falls to the $1,370-$1,380 range by the end of the week, that could still be a positive sign, because it’s still above the key $1,360 by the end of the month.

If we continue to see more “Iran War News” in the media this week, the gold price may head to the $1,410-$1,425+ level. Regardless, for gold to finally break above its 5-year $1,360 is a crucial milestone for traders and investors. A significant close above $1,360 for June could be very Bullish for the yellow metal.

Lastly, if we do see gold close above the key level and move higher in July, it will likely retest the $1,360 level before doing so. Then look for the next technical level of $1,550-$1,600 for gold to find serious resistance.

In conclusion, technical analysis provides traders, hedge funds, and institutions, key levels to focus on. When these technical levels are breached, either to the upside or downside, then we can see significant movement in the price action. So, for gold to head to $2,000 and higher, it will likely do so in and around these key technical levels.