The second half of the year is setting up favorably for the precious metals sector, which was led in the first half by gold and gold mining stocks.

Of course, the Wall Street-beholden financial media is largely ignoring metals and mining – preferring instead to give celebratory coverage to every move toward new highs in the Dow and S&P 500.

That’s all well and good for conventional index investors.

But they are missing out on much bigger growth potential now being put on display by gold stocks.

For the month of June, the HUI gold miners index advanced 17.7% (more than double the Dow’s performance). The index is up over 30% since its low point in late May.

It’s not unusual for an annual rally in this volatile sector to produce a doubling of the majors’ share prices. For the more speculative juniors, gains can often be measured in multiples of 100%.

When things are going their way, there is no better sector than mining stocks for spectacular profit potential. When things aren’t, miners will burn investors far worse than any broad market index fund ever will.

Similarly, shares of gold and silver producers tend to amplify both the gains and the losses that occur in the underlying physical metals. Even a relatively modest correction in metal prices can translate into a crash in the equities.

Historically, the devastating declines produced during bear markets for mining stocks have outweighed the gains of bull markets. Over the past two decades, buy-and-hold investors have experienced lower risk and higher overall returns from bullion as compared to shares.

Investors may be surprised to learn that physical gold outperforms miners over the long run. The chart below – a 20-year look at the performance of the HUI gold miners index relative to spot gold prices – proves it: 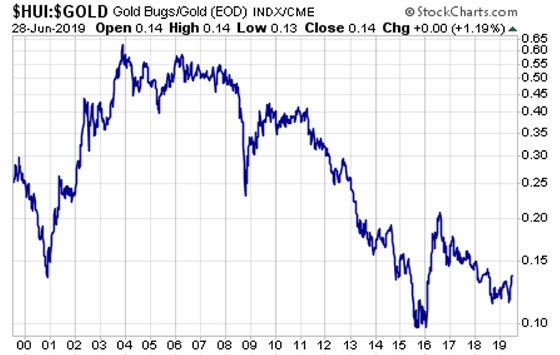 Gold equities are suitable for traders and speculators who have a high tolerance for risk. Gold bullion is better suited for long-term investors and hedgers who seek to guard against risks in the financial system.

During the turbulent market conditions of 2008, gold prices finished the year in positive territory. The HUI index lost nearly 30% of its value.

At the end of the day, stocks are financial assets – regardless of whether they are associated with hard asset producing businesses. A mining business can go bankrupt; its shares can go to zero. A gold or silver coin will never become worthless.

Precious metals bulls who prefer to stick with physical bullion can still take some encouragement from periods when the mining sector gets hot. A sharp rise in gold and silver equities (as seen from late May through June this year) often precedes a sharp rise in the metals.

We haven’t yet seen silver move strongly to the upside. Prices remain extremely depressed in absolute terms and relative to gold and other metals.

In a recent interview with Money Metals, Weldon noted the bullish price action in the major silver mining exchange traded fund (SIL). “When you look at the SIL versus the price of silver, it's flipping right now, where the silver mining shares are beginning to grab the torch of upside leadership here. So to me, all that bodes very well for silver,” he said.

Though lately the white metal seems to have lost its mojo, it will eventually get it back. The technical setup suggests that could happen sooner rather than later (but investors should still be prepared to exercise patience).

Physical silver is a great choice for investors who want to capture upside potential similar to that of mining stocks while holding a hard asset that has historically served as money.

Given that the gold:silver ratio trades at a generational extreme of over 92:1, there may never be better time from a value perspective to favor silver. If the signal of the mining sector is accurate, silver is just about ready to launch.