After Columbus discovered the New World in 1492 and the Spanish began to extract vast amounts of gold and silver from Mexico and South America during the 16th century, the global production of precious metals would grow considerably over the following centuries. However, the rise of gold production during this period still pales in comparison to what is taking place in the modern gold mining industry today.

Furthermore, when Spain conquered Mexico and South America (including Central America), the riches they received from the discovery and production of gold and silver gave them the power to lead the Habsburg Empire of Europe for the 16th and 17th Centuries. Thus, there was no coincidence that Spain became the World Super Power for centuries due to the huge discovery of new gold and silver mines (and gold looting) in Mexico and South America. 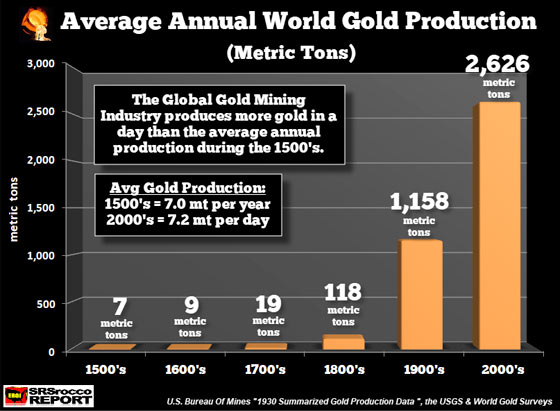 Here we can see that global gold production increased exponentially in the 1800-1900’s. While part of the reason for the massive increase in global gold production during this period was due to new large gold deposits found in the United States, Australia, and South Africa, another factor was the introduction of fossil fuels as a much higher power source, including advanced extraction and processing technology.

Here is the same chart above, but shown in a million troy ozs: 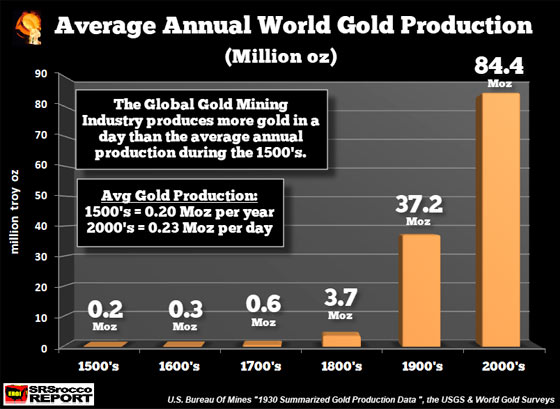 While this is a fascinating statistic, let’s look at the next chart. In just the past five years, the gold mining industry produced more gold than what the world mines supplied for 400 years, from 1500-1900: 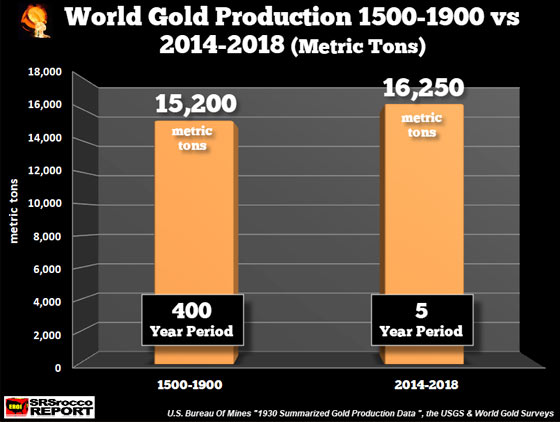 And in a million troy ozs: 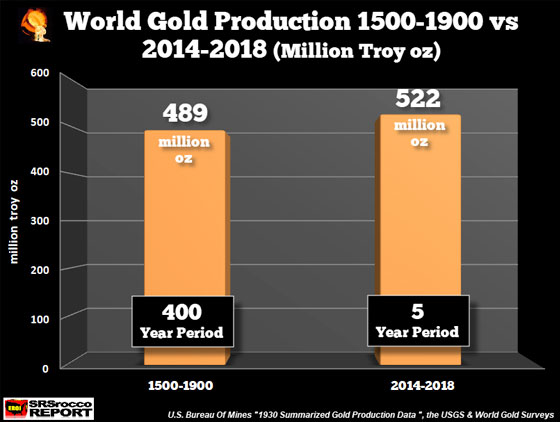 Thus, the world was producing an average of 1.2 Moz per year from 1500-1900 (489 Moz divided by 400 years) versus 104 Moz per year (522 Moz divided by 5) for the past five years. It’s truly amazing the amount of condensed energy that fossil fuels provide, especially oil. As I have mentioned in previous articles, the energy content in one barrel of oil equals 10,000-20,000 hours of human labor. If we take the average of 15,000 human labor hours per barrel of oil, that would also equal the manpower of 150 mine employees working 10 hours a day for two weeks (10 work days).

So, with just one barrel of oil, the modern mining industry has replaced the energy-labor of 150 workers for two weeks of work. Just think about the immense amount of oil the top gold miners consume each year. According to Newmont and Barrick (two largest gold miners) Sustainability Reports, their combined diesel and heavy oil consumption in 2017 was a stunning 80 million barrels of oil equivalent.

By Newmont and Barrick consuming 80 million barrels of oil to produce gold in 2017, they utilized the manpower of 137 million laborers working 24 hours a day for 365 days a year. We must remember, most of these gold mines are running 24 hours a day. However, if we look at the employee data from Newmont and Barrick Sustainability Reports, their total global workforce was only 48,700 in 2017.

Gold mining analysts and precious metals investors seemingly have no clue the tremendous amount of energy that comes from a barrel of oil. We have taken for granted, the energy that oil provides the foundation for our high-tech world today. When oil production peaks and declines, gold production will be negatively impacted. It will no longer be economically feasible to extract gold in large open pit mines with ore grades in the 1-2 gram per ton range (or even higher).

Lastly, if we have to return to mining high-quality narrow vein gold, then global production will drop like a rock. Investors will then be forced to buy mostly the only above-ground inventories of gold. At that point, physical gold buying will destroy the Paper Comex manipulation policy controlled by the Fed and member Bullion Banks.

So… it’s extremely wise for precious metals investors to PAY ATTENTION to what happens to GLOBAL OIL PRODUCTION.