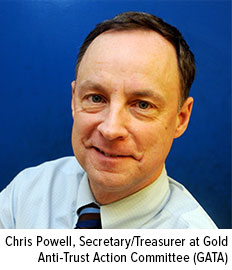 At least the Financial Times now has come clean about its hostility to gold – as well as to free markets and elementary journalism.

Wolf replied derisively and dismissively: "This is a matter of absolutely no importance whatsoever. Who cares about the prices of useless metals?"

Stunned by such a counterfactual assertion, Kniel prompted Wolf to elaborate, receiving this from the FT columnist: "I mean to dismiss the whole monetary history of gold. It has no significance in the modern world. It is, as Keynes said, a barbarous relic."

Actually, Keynes' "barbarous relic" remark was made not about gold itself but about the gold standard for currencies. Keynes wasn't denying gold's use as money. But that is the least of the problems with Wolf's reply.

Who cares about the prices of useless metals? "No significance in the modern world"?

For starters, governments themselves care.

That's why central banks, against Wolf's advice, continue to hold huge inventories of gold and lately have been increasing them.

It's why central banks classify gold as a Tier 1 asset, equivalent to government-issue bonds and cash.

It's why central banks constantly trade the metal and its derivatives surreptitiously, directly and through the Bank for International Settlements, usually to restrain the metal's price, recognizing that gold is a determinant of currency values, interest rates, and government bond prices.

It's why the International Monetary Fund forbids its members from formally linking their currencies to gold, lest the metal gain precedence over government-issued currencies.

Further, London is the center of the world's gold trading, the bullion banks are major employers there, and the FT is based in London, so the newspaper itself ordinarily might care.

Of course, Wolf's dismissing "the whole monetary history of gold" doesn't make that history disappear. Indeed, today Agence France-Presse distributed a report about gold's monetary history that is both fascinating and tragic, gold's history being a big part of human history.

But Manly's wasn't only about gold and silver. It was also about largely secret market rigging by government, and the Financial Times says it's in the business of reporting about markets.

So is market rigging by government of no concern to Wolf as well? Since such market rigging is now so pervasive – for years now there have really been no markets anymore, just central bank interventions – why does any reader need someone of Wolf's views of journalism?

And if Wolf's indifference to both history and market rigging really represents the Financial Times (FT), what does anyone need the newspaper for, except possibly disinformation?

For years, GATA has been supplying FT journalists with documentation of surreptitious intervention in the gold market by governments and central banks. At least twice your secretary/treasurer has delivered such documentation to FT staffers face to face in London – in 2011 to the journalist who is now chairman of the newspaper's editorial board and U.S. editor at large, Gillian Tett, and in 2017 to FT reporter Thomas Hale.

Tett took enough notice to mention GATA in a column in the newspaper without ever pursuing the issue of market manipulation and without ever putting a critical question to a central bank.

Hale listened politely for 45 minutes, asking a few questions, perhaps not realizing that the FT would never permit him to commit journalism with this issue. Maybe Wolf himself told Hale that market rigging by governments doesn't matter or at least must not be revealed.

But in fairness to the FT, GATA long has been providing the same documentation to many other mainstream financial news organizations around the world with not much more satisfactory results, though a major story might be gained just by asking the U.S. Federal Reserve and Treasury Departments to specify the markets in which they are secretly trading and why, and then reporting their refusals to answer, and then by asking the U.S. Commodity Futures Trading Commission whether it has jurisdiction over secret manipulative trading by the U.S. government or its agents or if such trading is legal.

For more than a year, those agencies have refused to answer those questions for a member of Congress.

Also in fairness to the FT, most monetary metals mining companies don't care, or pretend not to care, about the suppression of the prices of their products.

But then mining companies are terribly vulnerable to governments for their mining permits, royalty requirements, and enforcement of environmental regulations, and to their bankers, most of whom are formally government agents in financial markets.

Do they fear not getting invited to the Bank of England's Christmas party? Or is it the revelation that the conventional wisdom on which Wolf bases his pontification is a bit off?