As the silver price continues to break out of its lows, two of the top primary mining companies are experiencing major production declines in the first half of the year. Mexico’s Fresnillo PLC and Peru’s Buenaventura’s top primary silver mines saw a significant decrease in production due to either falling ore grades, decreased volumes of processed ore, poor weather, or labor strikes.

The largest silver miner in the world, Fresnillo PLC, just released their 1H 2019 production results, showing declines in all three of their major silver operations. The Fresnillo, Saucito, and San Julian Mines reported a combined 13% decline in silver production during the first half of the year while Buenaventura’s Uchucchacu Mine suffered a 40% decline. 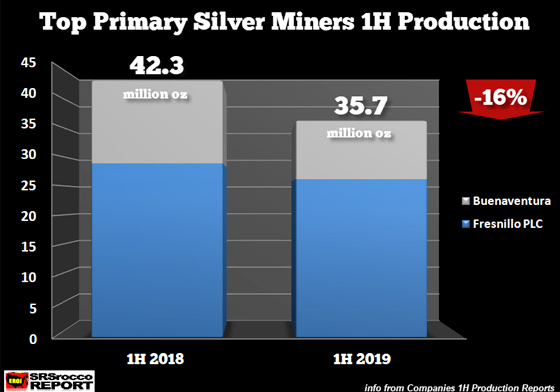 If the current trend continues, the top two primary silver miners in the world could experience an 8-10% reduction in total mine supply in 2019. That is a considerable weakening of production right at the very same time the silver price is experiencing some strength in the market.

Moreover, the largest primary silver mine in Peru is the Uchucchacu Mine. Because it’s production has fallen considerably this year, it has impacted the country’s silver output quite negatively. The Peru Ministry of Energy and Mines just released their May 2019 metal production report showing that the country’s silver mine supply is down 10.6 % versus the same period last year: 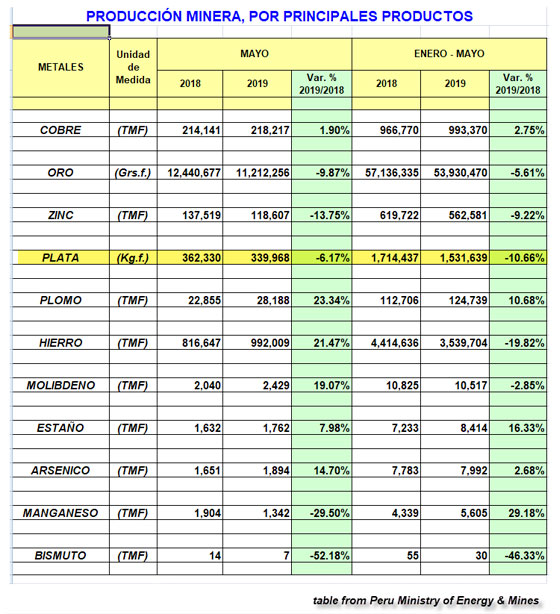 Furthermore, Mexico’s INEGI reported a 4% decline in the country’s silver production in the first four months of the year. However, that doesn’t include the loss of silver production due to the shutdown of the Penasquito Mine on April 29th, (which lasted until June 17th). It will be interesting to see what Mexico’s total silver production will be for the first half of 2019 versus the same period last year.

Lastly, the lower silver price trend over the past five years has put a great deal of pressure on the primary silver mining industry. While the industry has been able to cut costs and become more efficient in dealing with weaker silver and base metal prices, there’s no wiggle room left for the majority of these companies. Which is why I believe investors should pay close attention to the silver price as it is one of the most undervalued assets in the market.

In the next few days, I will be doing a new article on the Continued Silver Breakout from its “Symmetrical Triangle Formation.” I will be including how the price action has been trading in regards to key technical levels. Also, I plan on putting out a new Youtube video on the Details of the Silver Price Technicals and Fundamentals towards the end of the week.