Race to the Bottom: What to Expect as the Fed Eases

How low will they go?

With the Federal Reserve all but certain to cut interest rates multiple times in the months ahead, central bankers are engaged in a race to the bottom.

As negative interest rates expand in Japan and across Europe, as long-term bond yields in the U.S. plummet, and as President Donald Trump continues to talk tough on trade, the Fed has little choice but to cut.

President Trump has effectively declared a currency war – and enlisted a reluctant Fed to help him fight it. He is convinced that lower interest rates will boost the economy and that a lower dollar will boost U.S. producers in international trade.

Over the past year, Trump has inserted himself into monetary policy matters almost to the point of obsession.

He has berated Fed chairman Jerome Powell, his own appointee, on a regular basis and conferred with White House counsel about removing or demoting him from the Board of Governors. In June, one of his Twitter rants likened the Fed to “a stubborn child” for refusing to undo its 2018 rate hikes.

The question for investors is: Which asset classes will come out on top as the U.S. shifts toward monetary easing?

Heading into the summer, we saw an “everything” rally. Stocks, bonds, precious metals, and even cryptocurrencies all rallied simultaneously.

It’s unusual for the Federal Reserve to begin a stimulus campaign with the stock market already juiced. The Fed’s historical habit is to wait until markets break down and recession indicators flash before coming to the rescue.

This time is different.

What appears to be driving central bankers’ preemptive dovishness is their belief that inflation is not only tame, but too low.

They want to push inflation rates higher, above even their stated 2% target for a prolonged period.

Jerome Powell and his fellow Fed Governors have a term to describe their push for above-2% inflation: “symmetric” inflation targeting. By “symmetric” they mean that periods of low inflation should be countered with periods of higher inflation (accelerated currency debasement).

According the Fed’s preferred “core” inflation indicator (which understates some aspects of realworld cost increases), we’ve spent a lot of time running below target in recent years.

Investors are buying long-term bonds with yields that imply inflation will be contained by the Fed at or below target for years to come.

But if inflation starts rising above 2% and the Fed fails to keep it within its symmetrical objective, real losses on bonds and other interest-rate-sensitive assets could be asymmetrical in nature.

On the flip side, inflation risk has been so heavily underpriced by markets that even a slight return of inflation fears has the potential to drive hard assets dramatically higher.

The Spark That Could Ignite the Silver Market

Silver, for example, is perhaps the single most deeply depressed investment asset on the planet. 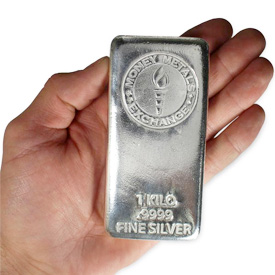 The white metal’s lagging price performance has resulted in it trading at its biggest discount to gold in three decades. Hardy silver bugs are excited at this rare opportunity to buy more ounces on the cheap.

The recent breakout in gold suggests the precious metals bull market is back. Most of the public just doesn’t know it (or believe it) yet.

We are still in the stealth phase of a precious metals bull run. When we enter the public participation phase – and demand for physical bullion increases – we have no doubt that silver will shine.

It only takes a tiny spark of investor interest in silver to light a fire under prices. That spark could be provided by the Fed’s upcoming round of inflationary stimulus.