What Is the Silver Market Price Telling Us Now?

Precious metals investors are once again excited about silver as the price has shot up 10% in the past month. Not only has silver experienced some nice gains in July, but it has also broken out above its multi-year Symmetrical Triangle Formation. But, what is the current silver market price action telling us about where the shiny metal goes from here? While we have seen some nice daily moves in the silver price, it seems to be peaking around that $16.60 area for the past week. Currently, the silver price is trading at $16.62 at midday.

Furthermore, the silver price has outperformed gold, pulling the Gold-Silver Ratio down from 95/1 at the beginning of July to 85/1 today. Which means, in just a few short weeks, one ounce of gold can now only buy 85 ounces of silver compared to 95 oz two weeks ago. Talk about a significant change in the Gold-Silver Ratio in a relatively short period of time.

So, where does the silver price go from here?? Good question. Well, if we look at the following Long-Term Monthly chart of silver, we can see that it has broken out of the Symmetrical Triangle Formation. It has also moved nicely above the 50 Month Moving Average (MMA – BLUE LINE) at $16.23: 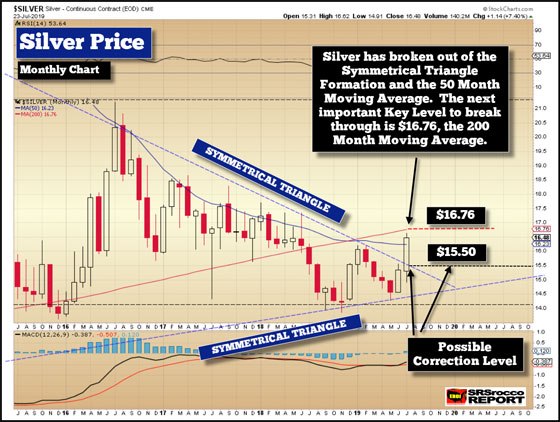 Each candlestick in the chart above represents one month’s worth of trading. As we can see, the silver price has surpassed the 50 MMA and is attempting to reach the next important key level, the 200 MMA (RED LINE) at $16.76. I would bet that the silver price will at LEAST touch that $16.76 level, or go possibly higher before any correction takes place. Why? Because, it wouldn’t be unusual for silver to pause for a moment and correct back down to the $15.50 before going higher.

However, that $15.50 Level is critical for the silver price for it to remain in a Bullish Trend because that is the top of the Symmetrical Triangle Formation line. I have seen this day in a day out in the markets. A large percentage of stocks will go back and test (touch) the breakout area before moving higher. Of course, it’s not a guarantee that this will occur. Especially how crazy the markets have become with the Fed possibly cutting rates next week, but we shouldn’t view it as unfavorable if it does happen.

Now, if we look at the Daily Silver Chart, the $15.50 level is also a key support area: 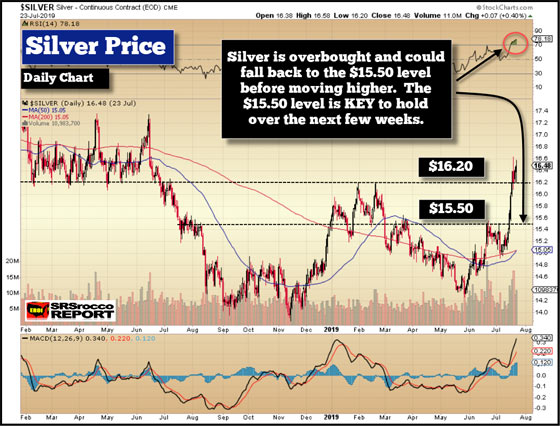 Please understand, I am NOT SAYING the silver price will go back down to the $15.50 level, but if it did, it wouldn’t be unusual for traders. That being said, the $16.20 level is also another SUPPORT-RESISTANCE LEVEL. From Feb-Jun 2018, $16.20 was a support level, but once it fell below that, it became a resistance level. We can see this in the silver price action Jan-Feb 2019. The silver price touched it twice but did not go above it. Furthermore, the Daily chart RSI (top of the chart) shows that silver is overbought. But again, it could go even higher.

So, you see, these TECHNICAL LEVELS are important guidelines for traders, hedge funds, investors, and institutions. And, it is no coincidence that the $15.50 level in the Daily Chart was also a Key Level in the Monthly Chart via the Symmetrical Triangle Formation: 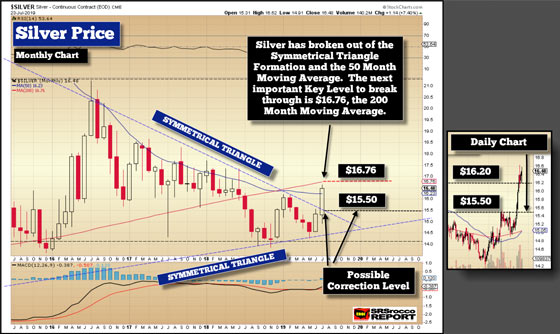 As I have stated several times, a BREAKOUT occurs when the price finally pushes through a critical resistance level in a big way. So, when silver broke out of the upper Symmetrical Triangle Line in the monthly chart, it also broke above the very same $15.50 resistance level on the daily chart. However, BREAKOUTS tend to be more impressive when they do so from longer-term chart formations.

It will be interesting to see how the silver price performs over the next 7-10 days, before and after the Fed FOMC meeting on July 30-31st. If the Fed announces a 50 basis point rate cut during the FOMC meeting, we could see the silver price breakout significantly above the 200 MMA of $16.76. That is if the price remains close to this level for the next week.

There is a lot more I will be explaining about the Silver Price in my upcoming Youtube video this weekend. If you haven’t subscribed to my SRSrocco Report Youtube Channel, please do so at the link below.