Like Jeffrey Epstein, Bullion Banks Get Sweet Deals from the Justice Department

First, a bank’s commodities trading department takes metals investors for a ride like unwitting victims in the back of Jeffrey Epstein’s “Lolita Express.”

Now federal prosecutors have extended the same sort of cozy non-prosecution agreement to shield the bank itself from a criminal indictment.

The U.S. Department of Justice (DOJ) found gold and silver traders working at Merrill Lynch had “schemed to deceive other market participants by injecting materially false and misleading information into the precious metals futures market.”

The agreement references “thousands of fraudulent orders” – intended artificially to move the markets up or down by “spoofing” other traders and investors – over a period of 6 years.

Two traders have been indicted on criminal charges so far. The non-prosecution agreement was only for the mega bank, not for its more expendable staff.

The bank gets off with a less-than-consequential $25 million fine, a promise not to do it again, and a commitment to set up more controls… which they can self-monitor.

The generous agreement was granted in part because “MLCI has no prior criminal history.” The prosecutors who drafted the agreement must not have had access to the Department’s own files, or the internet.

Suffice it to say the malfeasance covered here isn’t the first bit of shady activity Merrill has been involved in. DOJ prosecutors also didn’t take into consideration Bank of America’s own record. Both organizations have been implicated in schemes, scandals, and frauds going back decades.

Here is a partial list of what the bankers have been accused of doing to clients, shareholders and other victims (a more complete accounting can be found here):

Maybe prosecutors limited their definition of “criminal history” to past criminal convictions. There would undoubtedly be a lot more of those if Justice Department prosecutors stopped settling and signing non-prosecution agreements and instead started taking the banks to trial for their role in crimes.

Bank of America has a history of cutting deals with the Department of Justice.

In 2014, for example, the DOJ crowed about “the largest civil settlement with a single entity in American history.” Prosecutors settled allegations of massive mortgage fraud in return for $16.65 billion in penalties and restitution. 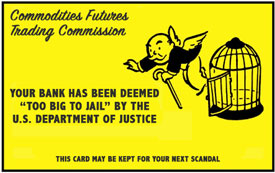 Prosecutors seem to have forgotten the bank’s involvement in that mess.

It isn’t clear whether any amount of crooked behavior would be sufficient for officials to finally prosecute and seek to ban these banks from trading in the markets.

As part of the June agreement, Bank of America agreed to ramp up internal controls and training to prevent future fraud.

That will be small comfort to anyone who has read the Bank’s rap sheet, but DOJ prosecutors seem confident that Bank of America will start policing itself. They “determined that an independent compliance monitor was unnecessary.”

The agreement not to pursue criminal charges is, naturally, framed as a big win for victims in the DOJ press release.

In order to see just how much “winning” there is, we encourage victims to send an email to [email protected]. The DOJ promises to reply with more information about how victims of the market rigging can get compensation.

We have yet to receive a response to the email we sent.

Those with the time can also call the toll-free victim hotline – 888-549-3945 – where they will go straight to voicemail. There has not yet been a reply to the message we left there either.

Victims may have to accept the Justice Department’s word that the $25 million penalty “represents the combined appropriate criminal fine, forfeiture, and restitution amounts in this matter.”

It’s a good round number – probably crafted to sound like a hefty amount to average citizens. It is, however, a paltry sum for the behemoth bank. It sounds woefully inadequate given the thousands of fraudulent orders and 6 years of history under review.

Plus, the agreement makes no mention of the huge numbers of metals investors who didn’t trade in the futures markets, but who relied upon the phony price setting that goes on there. This includes investors in physical bullion.

The beauty (for DOJ prosecutors and perpetrators cutting these deals prior to evidence being heard in court) is that there is no accounting as to whether the penalty is commensurate with the crime.

Victims don’t know, for example, what officials estimate as the total illicit gains related to the price rigging. It’s possible nobody at Justice bothered to make an estimate.

Thus far Deutsche Bank and Bank of America have cut deals on the issue of price rigging in the precious metals markets. Meanwhile the high-profile indictments, based on all the “cooperation” prosecutors are supposedly getting, have yet to materialize.

Perhaps the DOJ plans to secure non-prosecution agreements with the other bullion banks involved. It is not hard to imagine a scenario where several banks agree to cooperate against one another, but none gets convicted because prosecutors gave them each one of these nifty shields.

The sordid story of the Jeffrey Epstein case reveals something really important about how non-prosecution agreements are used to protect the well-connected from accountability.

It is time the Department of Justice stopped settling out with terrible human beings and the organizations they run. Actual justice for precious metals investors will involve throwing cheating bank executives in prison and tossing the crooked banks out of the markets.