THE “LIBERTY” SILVER OUNCE: ITS ORIGIN AND ITS FUTURE

The monetization of the “Liberty” silver ounce – the realization of the magnificent, humanistic measure which was proposed by none other than the President of Mexico, Jose Lopez Portillo in 1981 – would bring with it numberless social benefits and historic consequences for Mexico, which we have mentioned in other places.

ORIGIN OF THE “LIBERTY” SILVER OUNCE

In 1981, President of Mexico Lopez Portillo ordered the creation of a silver-ounce coin, the “Liberty Ounce”, whose weight was to be 31.1 grams, the weight of a Troy ounce. This coin was to bear no engraved monetary value. 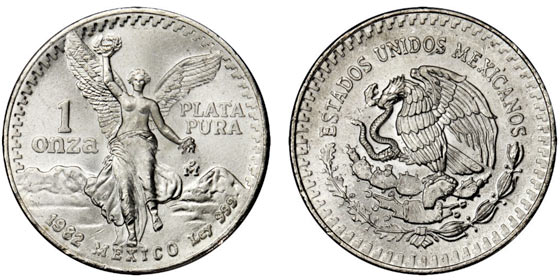 President Lopez Portillo’s intention was to provide Mexicans with a solid, traditional monetary instrument that would enjoy an official monetary quote, to be determined daily by Mexico’s Central Bank.

However, since its creation and up to the present, the Central Bank of Mexico has continued to mint the Liberty Ounce, whose value fluctuates every day; Mexicans have accumulated Liberty Ounces as savings through the years, and they can be calculated to amount to about 25 million ounces. These ounces remain in the possession of Mexicans, as savings which afford some protection against the depreciation of the Mexican peso, caused by the daily increase in the amount of Mexican monetary bills and digits.

Savers are holding on to these 25 million coins, notwithstanding the inconvenience of owning them, which consists in the important difference between the prices paid for them when they are purchased, and the prices that savers receive, when they wish to sell their ounces in exchange for paper bills or monetary digits.

THE “LIBERTY OUNCE” IN THE FUTURE

The well-intentioned monetization – the conversion into money, which President Lopez Portillo attempted to carry out with the Liberty Ounce – failed, because it did not take into account that the monetary value of a metallic coin, whose value resides in its content of silver, cannot be based on fluctuating market values of silver bullion; a monetary value must be attributed to the coin by means of an official quote which will be higher than the market value of silver bullion, and this quote must remain firm against daily fluctuations in the value of silver bullion.

(A personal anecdote: in 2003, I had the honor and pleasure of meeting with Don Jose Lopez Portillo, at that time ex-President, at a luncheon at which he was my guest of honor; the meeting took place at the old restaurant “Champs Élysées” on Reforma Boulevard in

Mexico City. I had the opportunity to explain to Don Jose, the reason why his project had failed so sadly, and frustrated his noble intention to gift the Mexican Nation with a monetized silver coin – the reason which appears in the previous paragraph of this article. One of those present at the luncheon, Mr. Humberto Hernandez Haddad, told me later, that when he accompanied Don Jose Lopez Portillo after the meeting, our distinguished guest had said to him: “Where was Salinas Price, when I attempted to monetize the Liberty Ounce?”)

“Seigniorage” is the profit for the Central Bank, when it assigns a monetary value to the silver coin, a monetary value which will be superior to the silver bullion value of one ounce; in the present case, it would amount to 20%. The seigniorage is protected against minor fluctuations in the price of silver bullion, by a “cushion” which would consist of an elevation of the monetary quote, which would yield a profit of 20%, to the nearest multiple of $20 pesos.

A MAGNIFICENT GIFT THAT WOULD NOT COST ONE CENT

The monetization of the “Liberty” silver ounce – the realization of the magnificent, humanistic measure which was proposed by none other than the President of Mexico, Jose Lopez Portillo in 1981 – would bring with it numberless social benefits and historic consequences for Mexico, which we have mentioned in other places.

However, there would be one consequence of exceptional importance: millions of Mexicans would be deeply grateful to the Mexican Congress for monetizing the Liberty Ounce, which Mexicans have been saving since 1981, and continue to purchase today, in spite of the fact that they are not money.

Should Congress approve the monetization of the Liberty Ounce today, its monetary value would be $420 pesos. (At today´s peso/dollar rate of exchange, this would amount to $22 Dollars). This value would rise with rises in the value of silver bullion, but never diminish.

The Mexican Congress has the legal right to create this extraordinary gift for the Mexican People, and by doing so, win the gratitude and political support of millions of fellow-citizens.

With the following advantages:

We await the action of the Mexican Congress…

The original article found here: The ‘Liberty’ Silver Ounce: its Origin and its Future