The Precious metals rally as the carnage in the global markets moves into high gear. As forecasted, the gold and silver prices have disconnected from the broader markets, IN A BIG WAY TODAY. While the Dow Jones Index was down more than 500 points, the gold price surged $30 higher and silver surpassed $17.

Are Gold and Silver finally in a new BULL MARKET? Well, certain indicators are giving them the green light. However, nothing goes up in a straight line, so we should be prepared for healthy corrections along with way. But, it’s nice to finally see that fundamentals do matter to traders as the precious metals are some of the best-performing assets in the market today.

As I was watching the silver price action during Asian trading last night, I knew something quite interesting was about to take place. A key level for silver is the 200 Month Moving Average, now at $16.82: 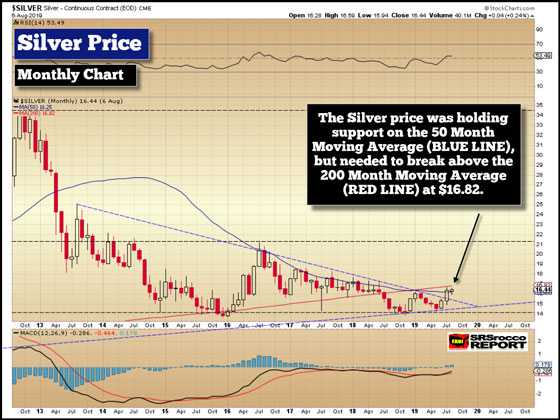 I mentioned this in my newest Youtube video, SILVER PRICE 2019: Key Levels For Continued Breakout. If you have not yet seen it, I highly recommend you do. So, for silver to continue on a new bullish trend, it would have to break through its 200 Month Moving Average (MMA) of $16.82, shown in the red line.

IMPORTANT NOTE: The chart above is by Stockcharts. They do not show intraday price moves for gold and silver. Stockcharts updates its commodity prices after the market has closed. This chart does not show the 50+ cent move in silver today.

During Asian trading last night, silver touched the $16.82 level, and then corrected lower. There is no coincidence that silver bounced off this level, the 200 MMA, last night: 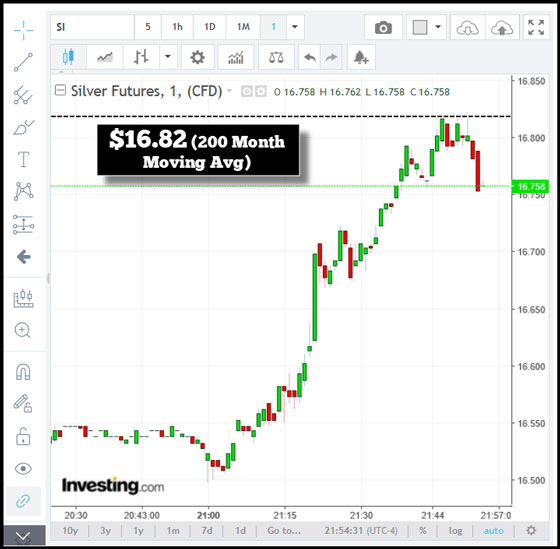 When I checked the markets this morning, I saw that silver had finally broken through that critical $16.82 level. And when it did, silver experienced another mini-BREAKOUT: 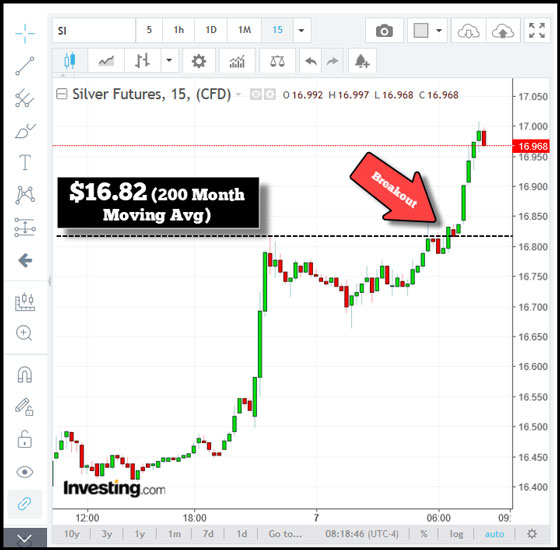 As I have mentioned many times, when stocks and commodities break through certain key levels, we get a confluence of TRADERS, HEDGE FUNDS, INVESTORS, and INSTITUTIONS all coming in to drive the price higher or lower. In silver’s example above, it was higher.

So, we have BREAKOUTS occurring during the intraday markets as well as longer-term setups in the Monthly charts.

That being said, gold and silver have gone up considerably in the past weeks and could experience a correction before heading higher. And, if we consider that the COT Report structure shows extremely high levels of Commercial Net Short Positions in both metals, usually a correction will occur.

BUT… what if this time is a bit different?? Could we see the silver price head even higher, while the Commercials liquidate their short positions?? Possibly, but we will have to wait and see how the market plays out over the next few weeks.

However, I knew at some point that gold and especially silver were going to disconnect from the broader markets in a big way due to the fundamental and technical setup in these charts below: 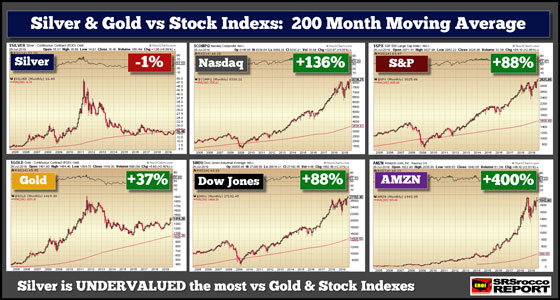 I explained this chart in my video linked above, showing how much higher the broader markets and Amazon were above their 200 MMA’s compared to gold and silver. At the time of this chart, silver was below the 200 MA, but now it is finally above it. Regardless, you don’t have to be a SAVVY TRADER to understand that the broader markets and tech stocks are seriously over-valued, if we measure them by the 200 MMA. However, gold and silver are closer to their 200 MMA and are considerably undervalued.

Furthermore, I also stated in past articles and interviews that the precious metals would also BREAK away from the cost of production fundamental. We are seeing that today as the oil price is down more than $2. The oil price has been the primary driver of the gold and silver prices for decades. But, that will change going forward as the falling U.S. and global oil production will destroy the massive amount of debt, derivatives, and leverage in the system.