Will The Precious Metals Rally Continue Throughout The Summer?

While the gold and silver prices have broken out higher, precious metals investors are wondering if the rally will continue throughout the rest of the summer. Since the beginning of June, gold has gone up $250 while silver has increased $3. Gold is now trading above $1,500 for the first time since 2013 and silver has finally penetrated a key resistance level held for the past six years.

So, we do the precious metals prices go from here?? Good question. Even though fundamentals are the key underlying driver of price, the market pays attention to key technical levels as I explained in my previous video, Silver Price 2019: Key Levels For Continued Breakout. In this new video update, I cover both the gold and silver price action and my analysis of the key levels moving forward.

Precious metals investors need to understand that while the fundamentals do indeed impact the price, certain key technical levels act as a HUGE SPOTLIGHT for traders, investors, hedge funds, and institutions. Thus, when gold and silver break through these key levels, it seems as if everyone wants to JOIN THE PARTY. For years, I disregarded technical analysis, but I have found that it provides clues to where the price will head in the future.

Yes, this doesn’t change the fact that the Falling EROI of oil will still destroy the value of most stocks, bonds, and real estate going forward. But, in the meanwhile, technical analysis will take away some of the mystery and frustration as the precious metals prices head up much higher in the future.

In my newest video update, GOLD & SILVER: Continued Summer Rally Or Correction, I provide charts showing the key levels for the precious metals over the next few months. For example, the gold chart below shows how gold enjoyed a BREAKOUT above $1,440 in the daily chart. Thus, we see breakouts occur in the longer-term monthly charts, as well as the shorter-term daily charts (and even intraday as I showed for the silver trading action on Tuesday & Wednesday last week): 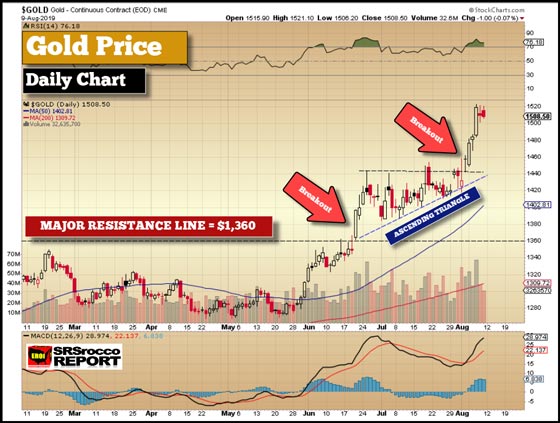 Not only do I explain what is going on in this chart, but there are also an additional 20 charts that I discuss in the video. However, one chart that I would have liked to include is this one below on the Amount of Negative Yielding Bonds versus the gold price. I have not only received this chart sent by followers in my INBOX, but I have also seen it on several websites. This chart shows an interesting parallel trend between the gold price and the amount of negative yielded debt: 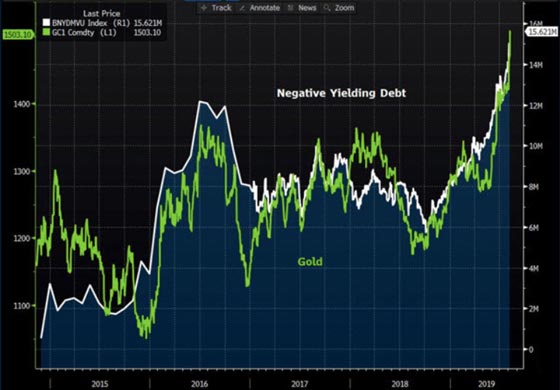 While the interest rate has indeed impacted the gold price, it is not the only fundamental factor. This chart only goes back to 2014, and doesn’t show that there wasn’t any negative-yielding debt before 2013 (just a very small amount). And as you can see in this chart, the gold price fell from $1,300 in 2015 to a low of $1,050 at the end of the year, while the amount of negative-yielding debt remained quite flat.

The fundamental factor that was impacting the gold price in 2015, was the crashing oil price that fell from $100+ a barrel in 2014 to $25 at the beginning of 2016. This chart does not show that dynamic. So, we just can’t use one metric to determine the future price of gold, even though interest rates are a significant factor… it’s just not the only one.

Furthermore, I discuss the INSANITY in the markets by the way certain stock prices are behaving currently. I chose Beyond Meat (ticker BYND) and compared it to some other competitors such as Hormel and Tyson. Of course, Hormel and Tyson are huge companies versus Beyond Meat, but if we look at their stock prices, you can clearly see the GRAND STOCK MARKET CASINO at work:

Beyond Meat’s total, TTM revenues for the past year were $165 million, but the company lost $33 million selling FAKE MEAT. Don’t get me wrong, there is nothing wrong with providing a vegetarian meat substitute, but if your losses are nearly 20% of revenues, the company is starting off on the wrong foot. Yes, I realize the supposed new Wall Street business model is that a company has to lose money for 3-5 years before making a profit, but that is downright silly. Who would ever consider opening up a company or store in the past with the understanding that they would lose money from the GETGO??

I gather with the tremendous leverage and debt in the system; it is now the NEW NORMAL to lose money for years before becoming profitable. Again, how stupid. Regardless, how does Beyond Meat post a market cap of $9.9 billion and the share price of $164.37 ($166 today) with a lousy $165 million in revenues and 261 employees versus Hormel’s stock price of $41 and Tyson at $88? You can look at all the other data, but Beyond Meat is just another version of the Tech Stocks during the 1990s. All PRICE and no SUBSTANCE.

I used Beyond Meat as an example of what precious metals investors are up against. If Beyond Meat’s stock price can jump from $25 to $240 at its peak in July, in just three months, why would investors pay any attention to gold or silver?? This is the most important factor here. Investors have become even more insane than they were during the Tech Boom during the 1990s that ended in tears.

However, we are finally seeing some GOOD INTEREST now taking place in the precious metals, and I believe that will continue over the next several years as the global economic and financial system continue to disintegrate under the strain of excessive leverage, debt and yes, negative interest rates.