The Precious Metals Are Setting Up For Big Moves Higher

After six long years, the precious metals are finally setting up for BIG MOVES higher. Even though the gold price has increased significantly over the past two months, we haven’t seen anything yet. Of course, gold has already enjoyed big moves in other currencies such as the British Pound where it has reached an all-time new high.

However, we have to be a bit more patient for gold to reach a new high in the U.S. Dollar as the Federal Reserve has a monopoly on the world’s printing press. But, it is important to understand that gold has broken through a KEY LEVEL and is giving the green light to the market that a new bull market has begun.

I wrote about gold breaking out of this key level back on June 20th, in my article, FINALLY… GOLD BREAKS OUT THROUGH KEY 5-YEAR RESISTANCE LEVEL, I posted this chart: 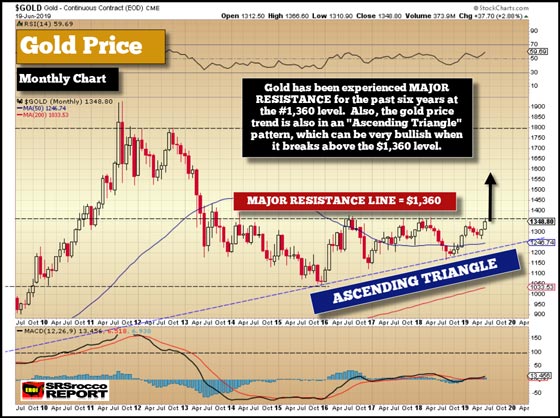 As of trading yesterday, the gold price closed at $1,509, but reached a high of $1,520. Thus, the gold price surged by $160 once it broke above that critical 5-year resistance level: 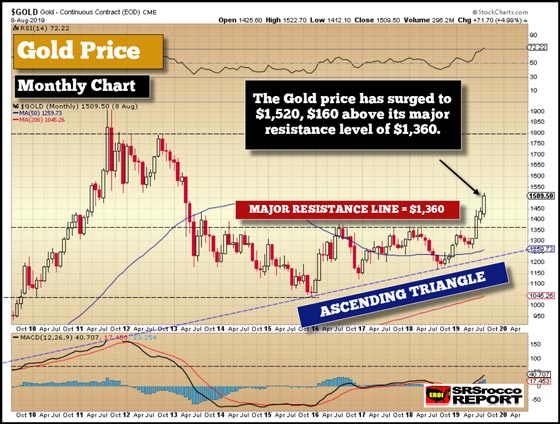 However, as I stated, this is just the beginning stage for much higher gold prices moving forward. Why? Well, the Fed and Central banks haven’t solved any problems since the 2008 financial crisis. Rather, the central bankers have papered over the problem with money printing and a zero-interest-rate policy. According to a few sources, there are $14 trillion in negative-yielding bonds in the world. Thus, bondholders are paying the central banks to borrow money from them.

IMPORTANT: While the precious metals have broken through key levels and will reach new highs in the future, we must understand that CORRECTIONS will take place. We should not be surprised if gold and silver experience significant corrections before moving into the next stage.

Now, while the gold price has enjoyed a MAJOR BREAKOUT, we are still waiting for silver to make its move. Yes, the silver price has broken above an important symmetrical triangle formation that I wrote about several weeks ago, but it must close significantly higher above its 200 Month Moving Average (MMA) of $16.82 to be in the first stage of a new BULL MARKET: 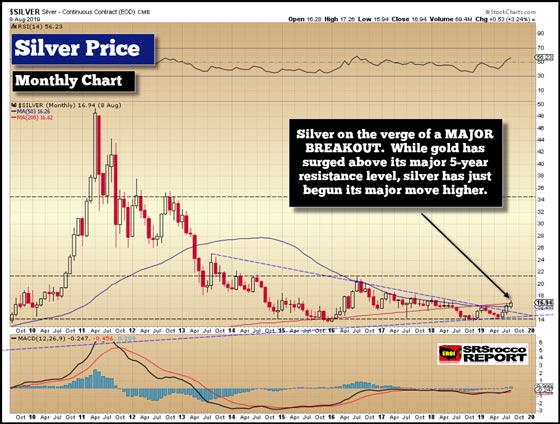 So, why is this 200 MMA (Red Line) such a critical level? Well, it was the next important level to take out after silver broke through the 50 MMA (Blue Line). I will be doing a new YouTube video on the precious metals this weekend, so please subscribe to my channel to receive updates.

As I have stated several times, while the FUNDAMENTALS are the underlying price drivers, the KEY TECHNICAL LEVELS provide the big punch as Traders, Investors, Hedge Funds, and Institutions all jump aboard. We can clearly see this taking place as silver approached the important 200 MMA. Please look at the following intraday silver price charts: 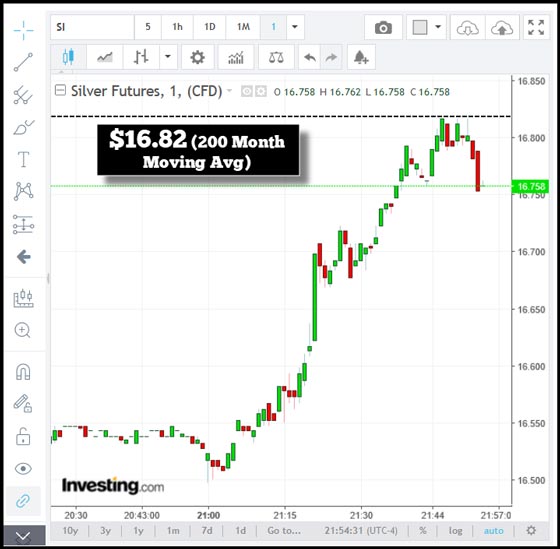 When the silver price first approached that key $16.82 level during Asian trading Tuesday night, it touched it several times and bounced off of it and corrected lower. Then in the next chart, we can see that as the silver price finally broke above that $16.82, it enjoyed a MINI-BREAKOUT to $17.00, and then eventually to $17.20: 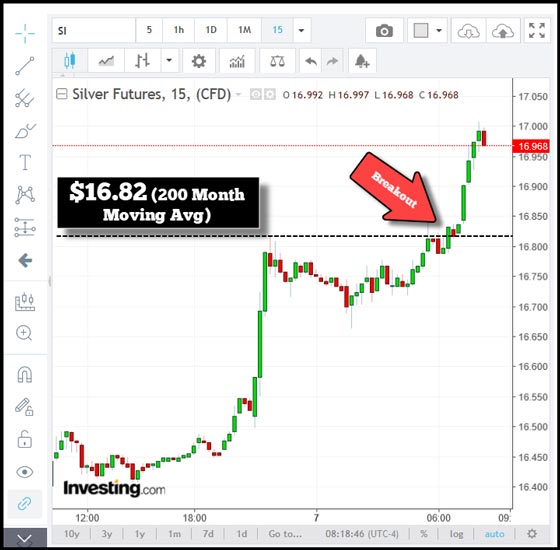 Once silver broke above the $16.82 level (200 MMA), we see that it corrected right back down to the same level during trading yesterday (Thursday): 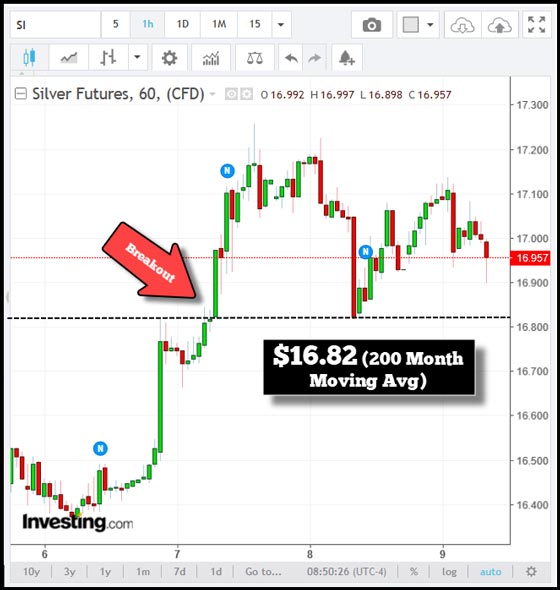 Now, I am going to repeat myself. THERE IS NO COINCIDENCE that silver traded off this important 200 MMA of $16.82. So, these KEY LEVELS mean something to traders and the charts are showing it right in front of our eyes, whether you believe in technical analysis or not.

Thus, when silver broke above that 200 MMA, it quickly shot up to $17.20 as it came on the radar of TRADERS, INVESTORS, HEDGE FUNDS, and INSTITUTIONS. These key levels act as a magnifying glass for the market. When they are broken, we see a HUGE increase in trading volume and investor interest.

I discussed this in my newest interview with Chris Marcus of Arcadia Economics:

In my interview, I explained that even though the silver price chart had broken through key levels, the Silver SLV ETF didn’t until this week on Tuesday: 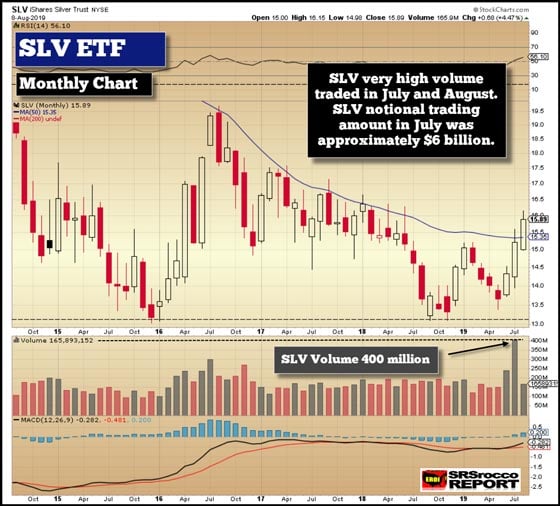 We don’t see the daily price action in this monthly chart, but once the SLV broke above its 50 Month Moving Average of $15.35, it jumped to $16.20 before correcting. And, if you notice the trading volume of 400 million shares traded in the SLV ETF in July, it was much higher than the monthly volume in early 2016 when the SLV price went from $13 to $19. Furthermore, the SLV ETF trading volume in August is already at 170 million shares, and we still have three more weeks remaining in the month.

So, this 50 MMA in the SLV ETF will be a KEY LEVEL to remain above this month. Again, I will discuss this in my newest video this weekend. However, if we compare the trading activity of the SLV ETF to ROKU, a new high-tech stock, we can clearly see how insane the market has become: 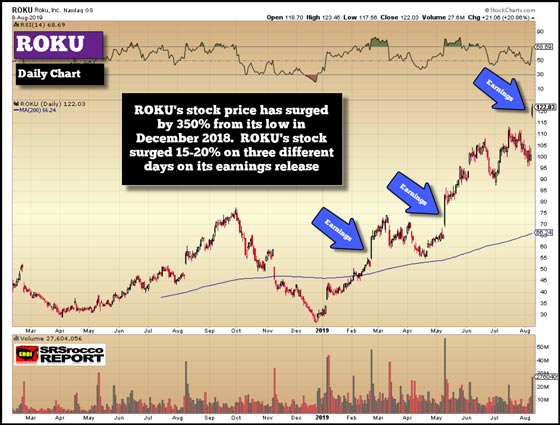 After ROKU, an entertainment streaming content provider, bottomed in December at $27, it exploded 350% to $122 yesterday. All of those large single-day stock price moves occurred after earnings releases. Yesterday, ROKU surged 20% after Q2 2019 results reported a large growth in subscribers. However, the company continues to lose money, which doesn’t seem to be a concern to Wall Street or Investors anymore. It’s all about the growth, forget about profits or increasing debt levels.

Why would investors pay attention to gold or silver when they can make BIG MONEY in stocks like ROKU?? And, if we look at ROKU’s monthly trading volume, it’s right up there with the SLV ETF: 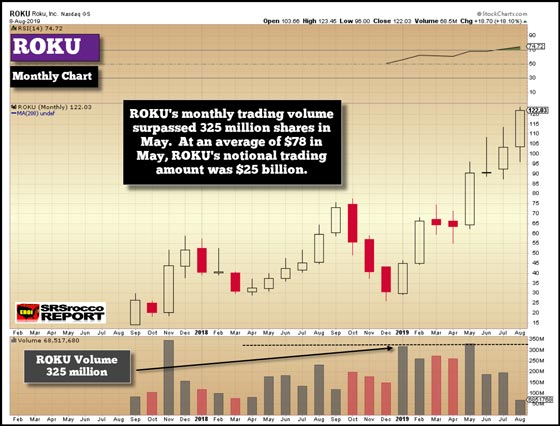 In May, ROKU’s trading volume reached 325 million shares. Thus, ROKU’s notional trading amount was approximately $25 billion in May compared to $6 billion for the SLV ETF in July.

Regardless, investors have gone utterly insane by driving up stocks prices of ROKU and even Beyond Meat, ticker BYND. As we can see in the chart below Beyond Meat’s stock price exploded nearly ten times its IPO price of $25 in May to $240 in July: 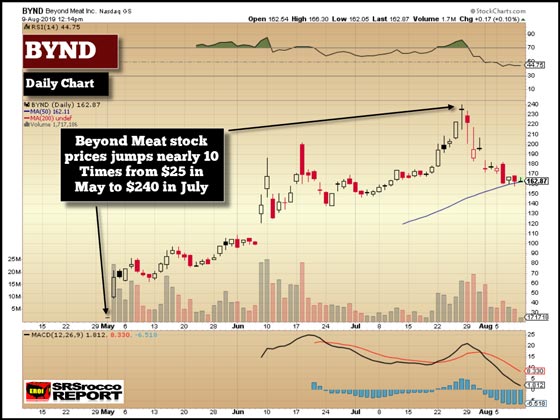 When investors are provided with these types of companies to bet on in the GRAND STOCK MARKET CASINO, then it’s no surprise that gold and silver have been overlooked for the past six years. However, that is about to change for the precious metals as the Fed, and Central banks take the next big step to prop up their fiat currencies.

Lastly, while gold and silver are finally showing some life as they break through key levels, we are just in the beginning stages for much higher prices in the future. Please check out my newest Precious Metals video update this weekend.