Just a few weeks ago, silver naysayers told us we’d have to wait months, or even years, before the market made a big move. Now they are eating their words!

The white-hot metal surged past $18.50/oz this morning to reach its highest level in more than two years.

Silver is up more than 13% in the month of August alone, a time when many precious metals analysts had expected summer doldrums. Even some long-term silver bulls became short-term bears.

The widespread pessimism toward silver is totally understandable given its performance characteristics over the past few years.

Like clockwork, rallies would stall out at resistance levels. Banks and other commercial traders playing the short side of the futures markets would always overpower the longs.

So when open interest on silver contracts on the COMEX rose significantly last month, it seemed that big institutional short sellers were set up to smash prices back down once again.

That’s certainly what long-term silver bull Craig Hemke of TF Metals Report expected.  “JP Morgan and Citi [are] making sure there’s no breakout,” he said on the July 19th Money Metals podcast.  “You've got to figure that trend is probably going to continue.”

Hemke didn’t think silver would get above the “tremendous amount of bank created and technical resistance” at the $17 level. “That's why I think gold continues higher and silver continues mostly sideways maybe for another six to eight months,” he concluded.

In fairness, nobody gets short-term to intermediate-term forecasts right 100% of the time. Our friend Craig Hemke has gotten a heck of a lot of things right over the years – and he most certainly wasn’t urging long-term investors to bail out of their positions.

I fully believe that what we're seeing in gold, silver, and the mining shares is the beginning of what may evolve into the greatest metals' bull market in which you and I have ever participated.

In the early 2000's, I stated my belief that, before the public-mania phase had been completed a number of years hence, we would see silver prices over $150 an ounce.

This may sound hard to believe.

The reality is this: Trying to trade precious metals market day to day or week to week is almost always a mistake. The trends that really matter occur over periods of months to years.

If you missed the opportunity to buy silver while it was still on the ground floor because you worried prices might sink into the basement, there are a couple good reasons not to fret.

First, silver under $20/oz. is still an amazing bargain. It could double in price and still sit well below its all-time high of over $49/oz. Silver remains cheap versus stocks, bonds, and even gold.

Second, the silver market may finally be due for a pause, if not a pullback. The weekly RSI momentum gauge is in extremely overextended territory, above 70, for the first time since 2016. 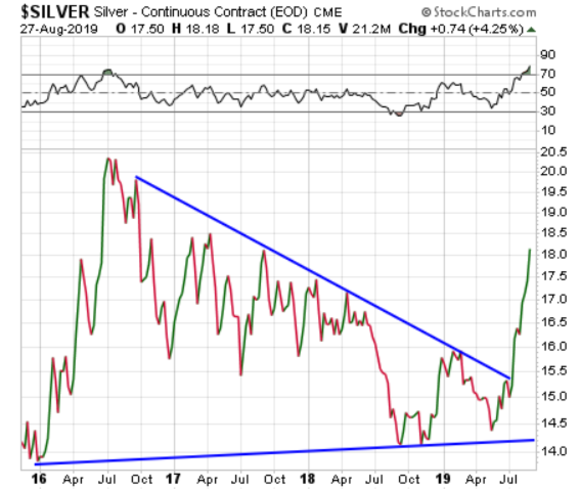 That doesn’t necessarily imply a heavy and prolonged pullback will follow like the one that occurred from 2016-2018. Having recently broken out from that consolidation phase and now exhibiting bull market characteristics, silver’s pullbacks are more likely to be sharp and short-lived.

The next upleg in silver will probably coincide with a major trend change in the gold:silver ratio. That ratio hit a quarter-century high above 92:1 earlier this year but has retreated dramatically in favor of silver in recent weeks, today under 83:1. 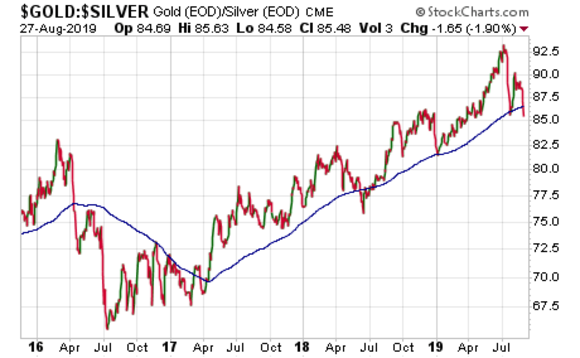 The ratio seems to trend around its 200-day moving average (the blue line in the chart), which has been pointing up in favor of gold since April 2017.

With the ratio today now having fallen well below the trend line, a confirmed reversal of the major trend in the gold:silver ratio could portend big things ahead for silver prices.

Silver, being the more volatile of the two precious metals, usually outperforms during bull markets.

The naysayers harped on the fact that gold was outperforming through the first half of the year while some of the more virulent anti-silver bugs reiterated their misbegotten belief that silver isn’t money and won’t provide investors any safe-haven from trade wars or recession fears.

It’s true that silver’s biggest demand component is industrial. But in recent weeks the poor man’s gold has completely untethered from copper and other industrial metals that have continued to sink.

Unlike ordinary base metals, silver can move dramatically based on the wild card of physical demand from investors.

Not surprisingly, silver coin sales sank during the 2016-2018 basing out period that left some silver bugs feeling worn out and cynical about the prospects of prices breaking through ceilings in rigged futures markets.

As the legendary Sir John Templeton once said, “Bull markets are born on pessimism, grow on skepticism, mature on optimism, and die on euphoria.”

Fortunately for silver bulls, we’re a long way from euphoria.