Why Silver is better than Gold as an investment

While the surging Gold price has received most of the spotlight in the market, silver will outperform the king monetary metal over the longer term. Key fundamental factors make silver the more attractive asset and investment to own versus gold when we look closely at the data.

However, that doesn’t mean precious metals investors shouldn’t own gold. Investors need to own both precious metals, but I believe silver will provide better returns than gold in the future.

Now, there is this notion put forth by many precious metals analysts that central banks will be forced, at some point, to back their currencies by gold. Thus, the idea is that gold will reset at a much higher price.

While that is a possibility, backing debt-based currencies with gold will not solve our coming energy crisis. And, let me tell you, it’s an energy predicament that we have no real solution.

You see, it doesn’t really matter if we back fiat money with gold. The REAL ISSUE has always been ENERGY. The massive increase in debt and derivatives are a symptom of the Falling EROI (Energy Returned On Investment) of oil. Basically, while gold may solve certain issues in regards to “Confidence” in money, it doesn’t fix our energy problems.

I touched on this briefly in my newest video, Why Silver Is Better Than Gold. However, most of the video explains new charts that show fundamental factors on why silver is a better investment than gold as well as some key price levels for the short term. 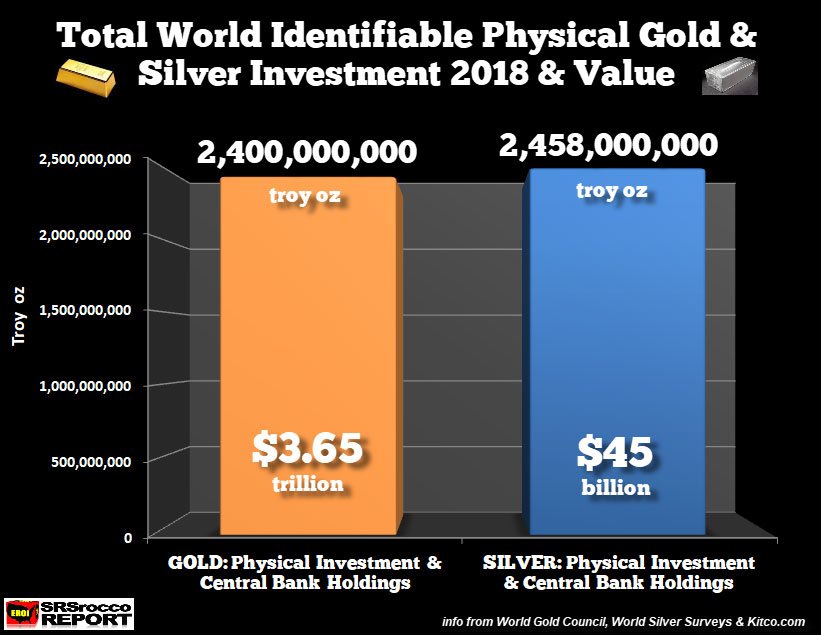 These official sources estimate there are about 2.4 billion ounces of gold and 2.45 billion ounces of silver held in public and private vaults, including central bank holdings. Yes, there is likely a great deal of physical gold and silver held by investors at home or in secret vaults that are not included in those figures. But, these amounts still wouldn’t change the values of these metals all that much.

I have included several new fundamental charts in the video on why silver will outperform gold on the longer-term basis. Also, some updated silver price charts show where I believe are the next important levels for silver.