As the silver price began to take off in July, Indian silver imports surged three-fold versus the same period last year. Something must have motivated the Indians to import more silver because the summer months haven’t typically been a strong buying season. However, one factor that may have caused the huge increase of Indian silver demand in July may have been due to the big jump in the gold price.

India’s gold imports in July plunged 55% from a year ago to the lowest level in three years as a rally in local prices to a record high and a hike in import taxes curtailed demand, a government source said on Monday.

If we look at India’s July gold imports for the past three years, we can plainly see the higher price has indeed impacted demand: 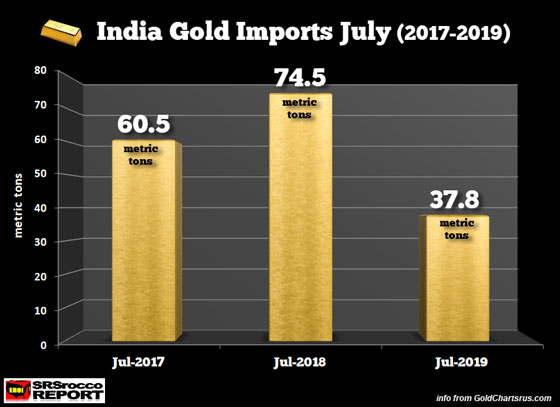 India gold imports this July fell to 37.8 metric tons (mt) versus the 74.5 mt during the same month last year. However, we see quite the opposite for silver. With the higher gold price and the hike in import taxes, Indians switched to buying silver: 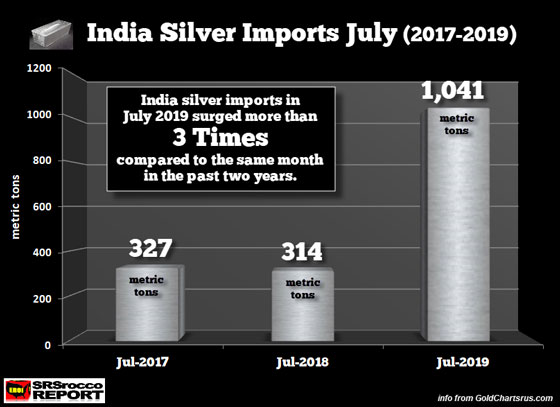 Indian silver imports more than tripled to 1,041 mt in July compared to 314 mt during the same month last year.

Furthermore, we can see that Indian silver imports in July 2017 were also quite low at 327 mt. Normally, Indian precious metals demand picks up in September after a successful Monsoon season. However, we are seeing increased demand for silver in June and July this year: 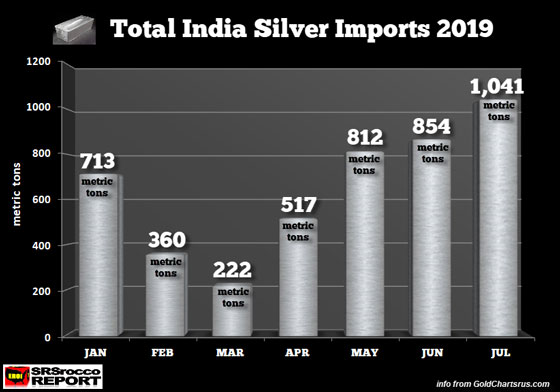 With Indian silver imports accounting for nearly 30% of total global mine supply in 2018, the situation in the silver market could become quite interesting if Indian demand really picked up this year. I am curious to see what the Indian silver imports will turn out be in August when the data is released as the silver price jumped more than $2 to $18.38 at the end of the month.

Will Indian silver demand continue to be strong in August even though prices are rising quickly? At some point, investors are going to learn that there really isn’t that much physical silver to go around. As I mentioned in a previous video, there’s about the same amount of physical silver investment in the world, 2.45 billion oz compared to 2.4 billion oz of gold.

As the price of gold continues higher, it will make silver even more attractive to the masses. Even when silver reaches $25 an ounce, it’s much more affordable for the public than $1,600-$1,700 for gold.