With the Silver price now experiencing a correction after running up more than $5 in the past three months, we now see more articles suggesting price manipulation as the bullion banks hammer the metals. There continues to be this notion put forth by many precious metals analysts that the bullion banks, especially JP Morgan, are controlling the gold and silver prices.

While I have no doubt there is an intervention in the precious metals markets, we must remember that the Fed and central banks are manipulating the ENTIRE MARKET with money printing, bond purchases, debt issuance, and zero (or negative) interest rates. However, the current Price of gold and silver, even with the supposed market rigging, are still priced higher than their overall average production cost.

Unfortunately, the fact that the prices of most goods and services are based on their cost of production tends to be overlooked by the majority of the analyst community… whether they are from the mainstream or alternative media. I can assure you that if you consider the price of a standard pair of jeans (not a high-end name), it would be based on the entire cost structure from beginning to end, when it finally shows up on the retail shelf.

No company can sell a product for less than it costs for an extended period of time, or they will go bankrupt. On the other hand, the market would not pay 100% more than the cost for a typical pair of jeans, if the competition was selling it at 10% over cost. Economics 101.

Now, if we want to understand the MANIPULATION of the market, we have to realize where the extremely OVERVALUED or INFLATED prices are contained. As I have stated many times, the majority of STOCKS, BONDS, and REAL ESTATE are where the focus of the Fed and central banks manipulation have been directed. Why? Because that is where 99% of the market has invested its funds.

Thus, the overwhelming majority of goods and services, including precious metals, are not overvalued, but this is not true for the majority of stocks, bonds, and real estate. These supposed assets are extremely overvalued. Which means, this is where the greatest degree of market intervention is directed.

If we understand that the price of most goods and services are tied to their cost of production, here is a chart of Pan American Silver’s estimated break-even and its profit or loss per ounce: 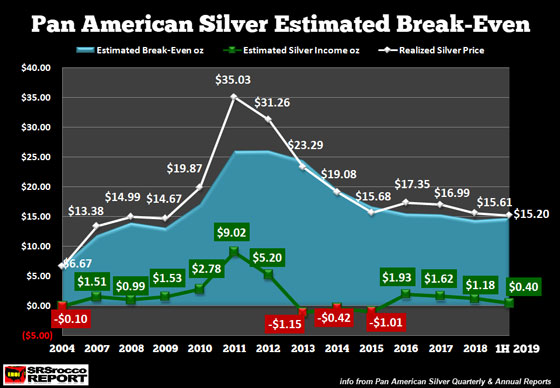 So, should we expect Pan American Silver to earn $9-$10 profits per ounce a year for an extended period?? That depends on how the market is valuing silver. Currently, and for quite a while, silver has been valued based on its COST OF PRODUCTION. And we can clearly see this shown in the long-term silver chart: 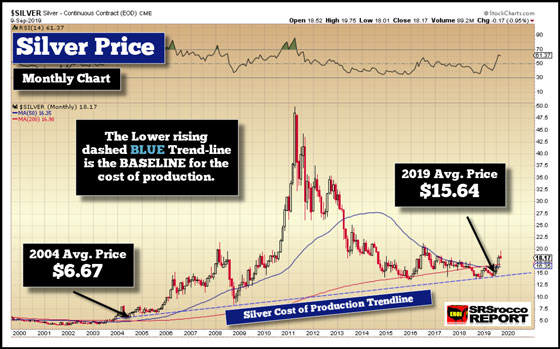 So, the silver price chart represents the REALITY taking place in the silver industry if we look at the metal as a commodity, based on the cost of production. However, silver is more than just a commodity used to make Solar Panels and I-Phones. Silver is also a store of value and money. But, the market is not valuing gold or silver as money currently, BUT IT WILL.

As I mentioned at the beginning of the article, several analysts are suggesting that the bullion banks are manipulating the silver price… almost as if the silver price was the only metal being manipulated. Of course, they throw gold in there as well. Yes, banks have indeed used “Spoofing” and “Other trading tactics” in the gold and silver market for their own gains, but all of that manipulation does not change the simple fact that the current silver price is ABOVE the cost of production.

Now, it would be one thing if the bullion banks and their shrewd precious metals traders were pushing silver down to $8-$10 an ounce. That would likely bankrupt a large percentage of the primary silver mining industry. However, we have not seen that.

Furthermore, there is this idea that the massive amount of paper silver trading is substantially above the physical supply of the market. Thus, several analysts state that paper trading does not provide an accurate measure of the physical silver market. While that may be true, it’s also the case for the other metals and energy. Silver is not the only asset class with a tremendous amount of notional trading volume. 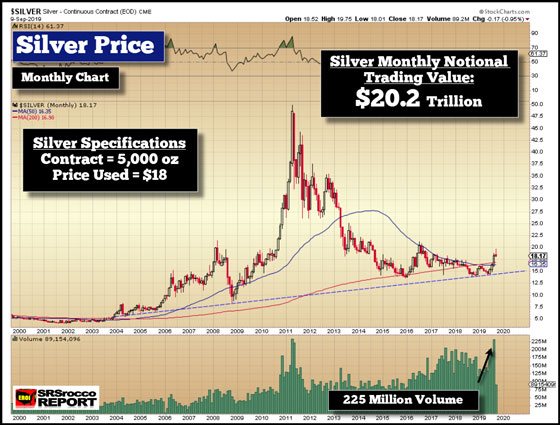 Please understand, I am just making a simple calculation here and with the other charts. No need to get too sophisticated. The silver trading volume in the chart above may include the smaller 1,000 oz Mini, but I am not sure. So, in August when silver shot up more than $2.00, the notional trading volume was a whopping $20.2 trillion. Sounds insane… ah? Well, let’s look at copper. If we use peak copper volume back in 2018, of 250 million contracts, it traded $17.5 trillion in notional value: 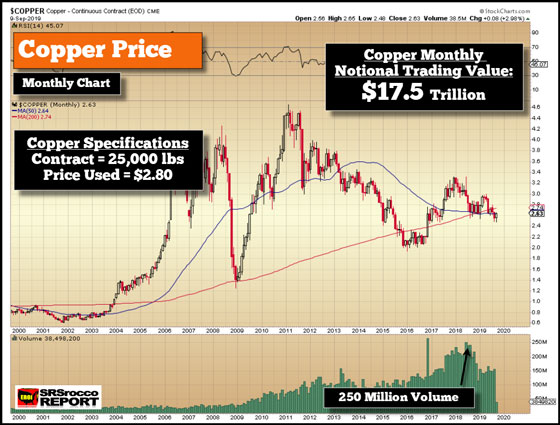 So, we can plainly see that silver’s $20.2 trillion in notional trading volume isn’t that extreme now when we compare with copper. Now, let’s take it a step further and look at how much WTIC Oil (U.S. West Texas Intermediate) traded in a single month: 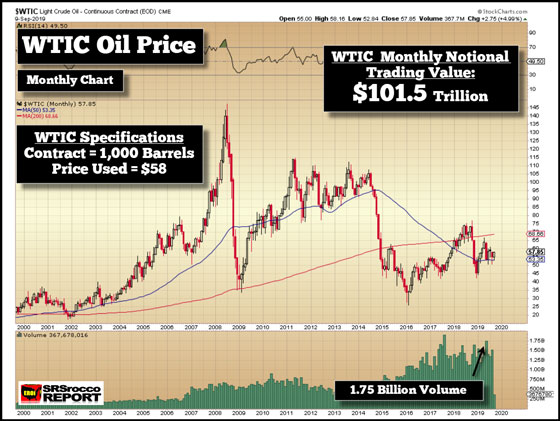 The market traded an astonishing $101.5 trillion in notional value in the WTIC oil that month. If we thought silver trading 225 million in monthly volume and copper at 250 million, well, WTIC Oil blowing through 1.75 billion contracts in a month… that TAKES THE CAKE.

And lastly, we have gold. Last month, gold’s notional trading volume was a stunning $135 trillion: 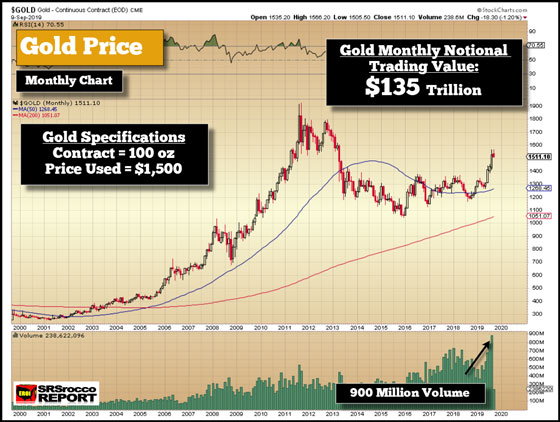 While it is true that gold is trading more than oil in monthly notional trading volume, THEY ARE ALL QUITE HIGH. Furthermore, the top gold miners cost of production is about $1,200 an ounce, and at $1,500, they are now making some decent profits, regardless of the 900 million (rounded higher) in volume traded on the markets.

I just wanted to point out that the majority of the market is experiencing a tremendous amount of trading. And let’s not forget, the NASDAQ Index is trading over 40 billion in volume every month. Thus, the NASDAQ’s monthly trading volume is more than 10 TIMES the peak trading monthly volume of Silver, Copper, WTIC Oil, and Gold combined.

How about them apples?

So, we need to put the market trading and manipulation of silver into perspective. While it is likely true that silver and gold are being manipulated… so is just about EVERYTHING else.

The key to understanding when the Fed and central banks lose control of manipulating the markets, we need to pay attention to what is taking place in the Oil Industry, especially the U.S. Shale Oil Industry. Why? How much economic activity would be generated if the OIL TAP was suddenly shut off?? How would that impact the trillions in Financial Paper Assets???

Precious metals investors need to become a bit more sophisticated in understanding the dynamics of the overall market and stop just focusing one aspect of Silver Manipulation and the supposed coming BIG SHORT SQUEEZE. Yes, we could see a short squeeze in silver, but the coming huge revaluation of silver and gold will occur when global Stocks, Bonds, and Real Estate really begin to crumble due to the central banks losing control of the massive debt and leverage.

And how will the Fed and central banks lose control of the market? That’s right… OIL. While the central banks can print money, they can’t print barrels of oil. Take a good look at Venezuela, and you will see how money printing works as oil production plummets… the result is HYPERINFLATION on steroids.

Lastly, the U.S. Shale Oil Industry is in serious trouble. According to the estimates I have seen, $137 billion of debt will come due by these U.S. oil and gas companies over the next two years. How are they going to repay or roll over this debt? Good question. And, on top of that, it seems as if production is now leveling off in several of the major shale oil fields.

With the U.S. Shale Oil industry accounting for 75% of global oil production growth since the 2008 financial crisis, they are the CANARY IN THE COAL MINE.

Silver has been again taken down by a massive market manipulation orchestrated by CME and the big institutional shorts – read J.P. Morgan. Until the CFTC imposes meaningful position limit rules on silver futures contracts, the small precious metal investor will continue to be the whipping boy. I remain bullish on silver for the long run. Thank you for your timely bulletin. 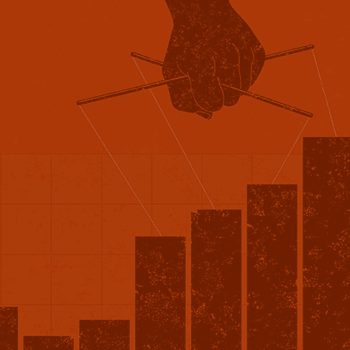 Having a long-term focus is key. If you are a short-term trader or hold a leveraged position, then the orchestrated take downs in the futures market can be devastating. On the other hand, if your aim is to accumulate silver over time, then volatility can be your friend!

When silver slips below its rising long-term moving average, it gives you an opportunity to buy at a lower price than would be possible if silver were to follow a smooth path upward. If, for example, you intend to hold until silver reaches triple digits and accumulate more along the way, then you are actually better served by sharp downdrafts than a steady rise to your price objective. When you can add to your position at a discounted price, you lower your overall cost basis and enjoy bigger profits when you finally decide to cash in.

Manipulation by leveraged players in the futures markets can only delay and/or slow the ascent in silver prices, as tightness in the physical market continues to drive prices higher over time.

How the United States Conquered Inflation Following the Civil War