Global silver supply is heavily dependent on one factor that is overlooked by the majority of precious metals analysts. For some odd reason, analysts only consider the cost of this factor and not the future supply. Without this supply, 98% of the silver production from these two primary silver mines would not have been possible.

Without energy, silver mine supply would likely collapse more than 95+%. Unfortunately, analysts only focus on the cost of energy and not the future availability of it.

For example, even though the cost of diesel for Pan American Silver was approximately 7-8% of its total mining costs in 2018, without the 15.4 million gallons of diesel consumed by the company’s mines, the overwhelming majority of that silver would have stayed in the ground. I estimated Pan American Silver’s diesel cost by multiplying the 15.4 million gallons by a wholesale price of diesel of $2.50. This is just an estimate.

I decided to focus on Pan American Silver’s two highest ore-grade primary mines. The La Colorado Mine in Mexico had a silver ore grade of 11.5 ounces per ton (oz/t) and the San Vincente Mine in Bolivia was 11.6 oz/t. These two mines would use the least amount of fuel per oz of silver production versus the other mines. Thus, the figures below are a BEST CASE scenario and are quite conservative compared to the entire primary silver mining industry. 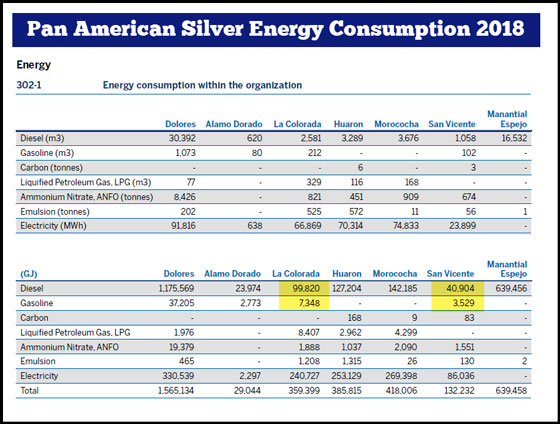 These figures are in GigaJoules, so I converted them to gallons. You will notice I did not consider any other energy sources, so the figures below are likely higher.

How much human work is the equivalent to a gallon of fuel? I have found different answers, but the average seems to be 1-gallon gasoline equals approximately 250 human hours of labor. While a gallon of diesel fuel has more energy than gasoline, I just used the gasoline figure to keep it simple. I used the data from this chart for the 1-gallon gas = 250 hours of human labor: 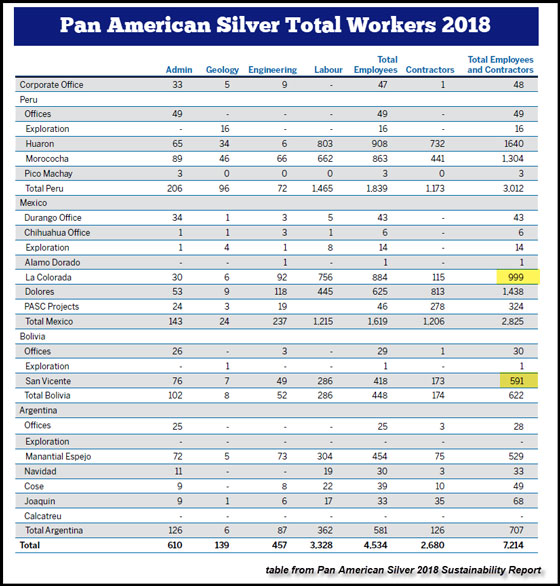 So, the La Colorado and San Vincente Mine employed a total of 1,590 workers in 2018. Now, if we compare the actual workers to the 71,000 petroleum equivalent workers last year at these two mines, here is the result: 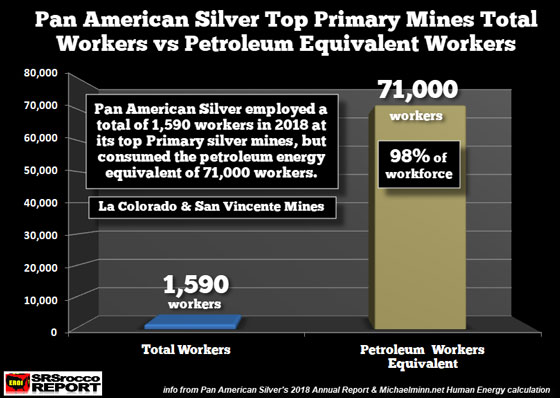 Even though Pan American Silver employed 1,590 workers at these two mines in 2018, the liquid fuel consumed equaled a stunning 71,000 people working 10 hours a day, 365 days a year. Thus, the petroleum equivalent workers, from the diesel and gasoline consumed at the La Colorado and San Vicente Mines accounted for 98% of the total “Energy Workforce.”

I really don’t think precious metals investors or analysts understand how critical liquid energy is to the silver mining industry, as well as the entire global economy. And, if we take it a step further and divide the amount of silver production between the real human workers versus petroleum equivalent workers, the labor from Pan American Silver’s workers only accounted for 246,000 oz of the total 11.2 million oz produced at these two mines last year: 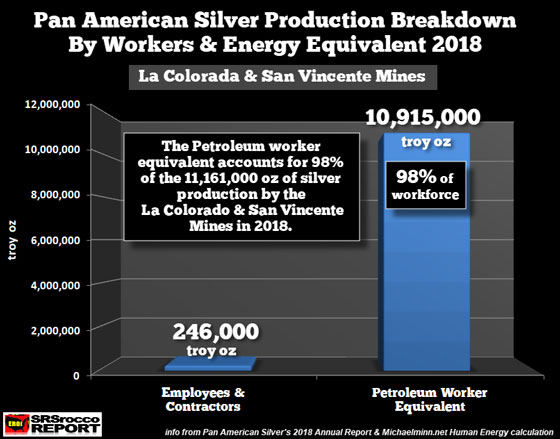 However, if diesel supplies ran out, could these workers at these mines produce 246,000 oz of silver? Good question. But, we must remember, these mines are only producing silver at 11.5 oz per ton. It would take the mining, extraction, transportation, and refining of 1,000 tons to only get 11,500 oz of silver. Actually, the net yield after processing is only 10.5 oz/t.

Let’s go back in time in Colorado during the late 1800s and see how many tons of ore miners were extracting. According to the U.S. Geological Survey publication, Mining In Colorado, 1926, here is the following excerpt: 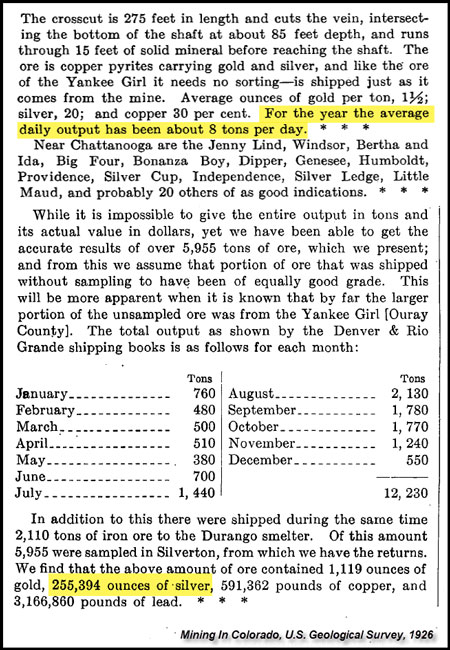 At the Yankee Girl Mine in San Juan County in Colorado during 1883, the miners were extracting about 8 tons of ore per day. However, the monthly figures of tons shown above are totals for the entire San Juan County that year. If we divide the 255,394 oz of silver (highlighted) by the 12,230 tons, it equals nearly 21 oz per ton. Furthermore, 12,300 tons divided by 365 days a year is 34 tons per day for the entire county. Not much at all per day compared to the 2,900 tons of ore processed per day using GOBS of ENERGY by La Colorado and San Vincente Mines last year.

Oh by the way… I didn’t even include the Electric Energy consumed by these two mines, mostly in the processing of the ore. Electricity consumption at La Colorado and San Vincente was the equivalent of 153,000 laborers working 10 hours a day, 365 days a year. What do you think of them apples?

The world has no clue how vital oil is to the mining industry and the global economy. We have totally taken it for granted. When U.S. shale oil production finally peaks and crashes, the world will begin to enter the next economic stage, transitioning from BUILDING WEALTH to PROTECTING IT.