The run up of the last few months to $1,565 gold and $19 silver has stalled out into a relatively high-level correction, giving back less than might be expected after such a spirited rise. 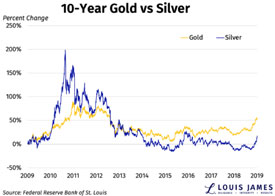 Many people are focusing on the downside, without asking themselves, "What's the relative reward?"

Even if you only believe the upside case to be around $2,000, that's still a potential 5x:1 reward compared to perceived risk.

Whatever gold's potential gain, silver's will almost certainly be considerably greater, as has historically been the case.

In the 1970's bull run, my biggest holding was silver bullion. The stagflation theme made it the go-to asset. Is history about to repeat? I think so.

Note the excellent overall performance of silver against gold during the 1970s. Singapore dealers are suddenly reporting that investors are buying more silver than gold. My simple advice to investors in the West is: Join them and buy silver bullion now! – Stewart Thomson, Graceland Updates

Keep it Simple and Straightforward…

On the above chart above we can see that silver tends to be quite volatile on the upside – and as recent trading sessions have demonstrated – on the downside too!

This is why you should be leery of adding leverage or margin. Just stick with tubes of physical trade rounds, and/or bars from reputable dealers.

Could I be wrong? Of course. Risk and reward go hand in hand. Remember, without risk, there would be no profit potential either. (Though negative interest bonds are attempting to disprove this thesis!)

Check your premise. How big is your picture? How much and for how long are you willing to wait? Does any other current investment theme offer such asymmetric potential?

Though platinum is a smaller market, it holds a certain allure. Largely an industrial metal, the questionable supply profile, coming mostly from South Africa, Zimbabwe and Russia, makes it an interesting speculation.

Until a few years ago, this metal (known as "little silver" by early Spanish Conquistadors who tossed it back into a stream to "grow up"), has usually sold for several hundred dollars/ounce more than gold.

Now at almost six hundred dollars less, the profit potential in platinum could be substantial, if it can regain its normal relationship.

Throwing the Bones. In ancient cultures, animal bones were heated and tossed onto a mat, looking for "patterns" to predict the future. Today, Elliott microWavers, Japanese Candlestickers and other precious metals' "bone throwers" seek to divine data from charts and graphs.

In fact, we use some of those tools ourselves. But occasionally, a massively profitable opportunity arises when a sector has reached a certain "tenor" that a bone toss can't tease out.

Where the best efforts at interpreting the questions Mr. Market poses cannot be answered until later. Where maybe this time it is different. Where those who don't hold anything at all – regardless of the current price – run the risk of being left completely behind.

It's not easy to "buy the correction." You can either take a position and accept information risk or wait until later and deal with price risk. Stu Thomson nails it when he says,

We are all cowards on price weakness. Those who admit it, who bet against it make money. Those who hide it and lie about it, lose money. End of story.

Don't forget that during a correction, most news is negative. You'll be dealing with the crowd's uncertainty.

You'll start doubting yourself, waiting for even lower prices, and more than likely fail to carry out the most critical step – acting on what you've already decided.

At certain times in history owning money is the best available "investment" idea, because all other investment classes have become so corrupted and distorted that having money is the only sensible choice. We are at such a point today, which means people who are the best informed, choose to place a portion of their wealth into the precious metals. David Morgan

Confusing linear with exponential. Markets spend most of the time trading in a linear, predictable manner – usually in congestion; occasionally in an up or down trend run.

Over 90 percent of the time, Bollinger Bands contain price movement within two standard deviations above or below the mid line. But once in awhile an outlier – stronger and more durable than the markets expect – is capable of driving the price exponentially in one direction.

This is where really big money can be made... or missed. If you wait for it to become obvious, these exceptional gains can reduce a speculator to the status of... a spectator.

The Gold story, while showing more of the same, is also shifting emphasis. It is making all-time highs in most of the world's major currencies. Central banks bought a record 651 tonnes in 2018 – a 75% increase from the previous year, and the highest level of net purchases since 1971 when President Nixon closed the gold window.

Additions by China, Russia, India and Turkey remain robust. But in recent months, a larger percentage of the world's gold refining, which routes through Switzerland on its way to Asia, is being siphoned off to the U.K. Germany, and France.

This shift is a strong indicator that the crucial "missing link" – a metaphorical spark which can ignite the supply-demand powder keg, destroying the market's delicate balance – may soon be lit.

Add the fear of missing out by North Americans as it becomes obvious that the last train is leaving the station, and in short order a demand contagion could spread across the entire precious metals' space.

It would be wise rather soon to decide if you want to participate...or just watch and wish you had.