We’re in uncharted territory. Never before have U.S. fiscal and monetary policy been leveraged so heavily to boost an economy that wasn’t even in recession.

Something will break – and it could be the value of U.S. currency. The Federal Reserve Note now faces devaluation pressures on multiple fronts.

With the federal government running a trillion-dollar budget deficit and an election year approaching, fiscal restraint is a dead letter in Washington, D.C. Politicians are fighting over who can promise to borrow and spend the most.

Meanwhile, President Donald Trump is trying to talk the dollar down versus the currencies of China and other trading partners.

Even as Trump vents frustration at the Federal Reserve on a near daily basis for being too tight, the central bank is actually ramping up its monetary easing policies.

They may not call it “Quantitative Easing,” but in September Federal Reserve officials launched a massive new campaign of liquidity injections that will expand their balance sheet by hundreds of billions of dollars. This was all prompted by trouble in the overnight lending “repo” market, where a lack of liquidity caused interest rates to spike to multiples of the Fed funds rate.

The Fed embarrassingly lost control of its own benchmark rate, threatening the credibility of its central planning powers.

The Fed barely managed to avert a wider financial crisis with its emergency market operations. And it soon became clear that the initial liquidity injections into the repo market would be insufficient for the big banks that depend on it. 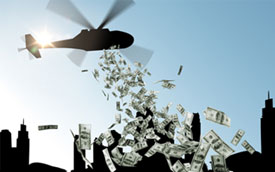 Officials had to raise their maximum daily repo facility and extend the duration of their repo operations.

According to Morgan Stanley strategist Kelcie Gerson, “We maintain that these temporary repo operations will not prove to be a sufficient long-term solution to the recent funding pressure. Ultimately, the Fed will need to increase the size of its balance sheet permanently.”

The Fed’s brief attempt at balance sheet reduction earlier this year (Quantitative Tightening) saw the Fed’s assets trimmed by about $600 billion. Now it appears likely that the central bank will steadily add that $600 billion (and possibly more) back to its balance sheet by next year.

Fed policymakers may also be on course to take interest rates down to zero – or possibly even below zero. Former Fed chairman Alan Greenspan has said it’s only a matter of time before negative rates (i.e., a penalty tax on savings) arrive in the U.S.

An Ideal Environment for Gold and Silver

What this monetary madness all may be building toward (albeit inadvertently) is an ideal environment for precious metals.

Gold and silver markets broke out to multi-year highs this past summer. They have rallied this year in spite of the fact that the U.S. Dollar Index so far refuses to break down.

Gold and silver are looking strong in terms of all major fiat currencies. It makes sense given that central bankers around the world are all pursuing easy money policies of their own.

Still, it’s been largely a stealth rally in metals up to this point.

Gold and silver aren’t garnering much attention in the financial media – perhaps because the U.S. stock market has also rallied.

Equities could potentially run up further as the Fed continues to ease. But if the recent hiccups in the repo market are a sign of bigger trouble to come in the financial system, then the Fed may be behind the curve and the stock market may be headed for some wild swings lower.

Although gold and silver can go up based on their own fundamentals regardless of how financial markets perform, public demand for physical bullion tends to go up during times of fear.

If ordinary investors and savers come to fear an accelerating loss of purchasing power in their dollar-denominated holdings, look out above!