Tocqueville's Hathaway acknowledges the political incorrectness of gold, if not intervention

Tocqueville's latest Gold Strategy Letter by fund manager John Hathaway wonderfully details the case for gold's price to rise even as the letter omits a few crucial things, as respectable people in finance must do when discussing the monetary metal. 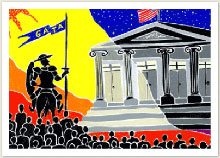 Systemic risks are increasing in the world financial system, Hathaway notes, but "have yet to trigger an appropriate market response."

Now why should that be? Could it be on account of surreptitious market intervention by governments and central banks?

Hathaway doesn't say. But at least he acknowledges the profound political incorrectness of gold.

"In our conversations with numerous investment professionals on the topic," Hathaway continues, "we generally find that an understanding of the investment case for gold does not translate into action on behalf of their clients. Why? Gold has become the third rail of investment ideas and represents career risk for any investment manager who fails to beat benchmarks because of metal exposure.

"For that reason gold is episodically underweighted by professional managers and retail investors of all stripes ranging from high net worth to 'moms and pops.' Antipathy to the investment theme seems to stem from the possibility of success that could undercut mainstream thinking. If you underperform because of gold exposure, you could lose your job. On the other hand, if you lose money in 'FAANG' stocks or other crowd favorites, you are safe from criticism."

I would be a little more candid. As author and fund manager Jim Rickards said on CNBC 10 years ago last month, "When you own gold you're fighting every central bank in the world".

Maybe not every central bank anymore, since Eastern European and Asian central banks have been buying lately, though of course they don't want to have to compete with retail purchases by ordinary investors.

But certainly you're fighting Western governments and central banks. Better not to mention their surreptitious interventions in the gold market if you want to avoid government auditing and preserve your invitations to Wall Street's forthcoming Christmas parties.

Hathaway's enumeration of the reasons gold should rise is posted at Tocqueville here.

If you want to determine whether gold will rise, you may do best to plant some listening devices in the office of the U.S. Treasury secretary and the trading rooms of the Federal Reserve Bank of New York, the Bank for International Settlements in Basel, Switzerland, and the Bank of England in London. No respectable person in finance dares to direct any critical questions there.