Even though the decline of silver mine supply at these leading producers isn’t impacting the current silver market price currently, it will likely do so as the Fed and central banks lose control of their QE money printing and asset purchase policy. In less than two weeks, the total U.S. debt has increased by another COOL $85 billion. With total U.S. public debt now at $22.92 trillion, it’s only a matter of time, maybe just a few weeks before we reach another record of $23 trillion.

With the global silver mine supply this year to reach an estimated 850 million oz of production, the total value based on the Kitco $16 average for the year would only be $13.6 billion. Thus, the U.S. Government has increased the public debt in the past two weeks by more than SIX TIMES the value of the Global silver production this year. 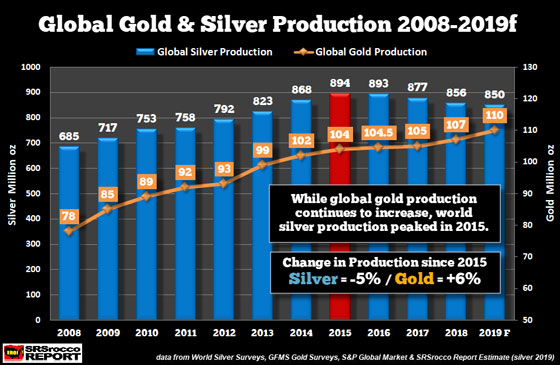 Yes, I do realize that comparing the value of silver to the increase in U.S. debt hasn’t mattered to the markets, but it will. What will happen with silver (and gold) will be very similar to the investor reaction to ENRON when the market realized that the company was a fraud. And, let’s not forget that several top Wall Street analysts, in their glorious (Let’s continue to bamboozle investors) fashion, continued to put out BUY recommendations days before ENRON collapsed.

So, the market will continue to be BAMBOOZLED by Wall Street and central banks right up until the time that the GIG IS OVER. This means the time to acquire Gold & Silver physical insurance is likely much wiser to purchase BEFORE than the day AFTER the GIG is up. 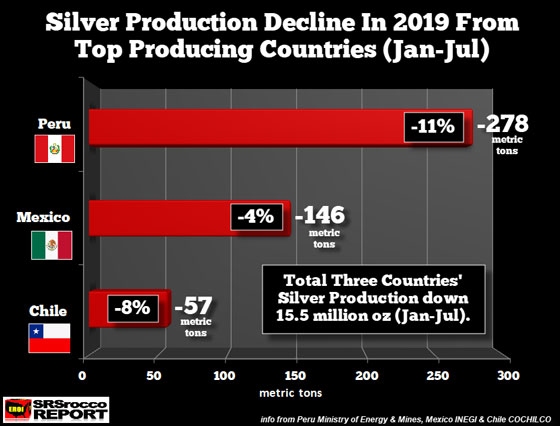 In the first seven months of the year, Peru’s domestic mine supply is down a whopping 278 metric tons (11%), while Mexico is down 146 metric tons (4%), followed by Chile down 57 metric tons (8%). The total decline in silver production from these three countries is 481 metric tons (mt) or 15.5 million oz.