Help Fight the Gold Manipulators, Double Your Gift, and Maybe Even Win a Case of Wine

How good it is to have friends, especially when you're up against nearly all the money and power in the world. GATA would not have lasted 20 years without our friends, and we won't last another month without them. But because of them we will last until the struggle is won.

Almost as if to prove this, two of our friends popped up again the other day, each with a generous and brilliant proposal.

Stefan Gleason, president of Money Metals Exchange (https://www.moneymetals.com), noticed your secretary/treasurer's recent and rather clumsy effort at fundraising and wrote that he would donate another $5,000 to GATA as a matching grant. That is, Stefan and Money Metals Exchange will match every dollar GATA raises up to $5,000 during December.

Almost simultaneously another supporter, Fay "Jack" Durrant, proprietor of the Fay J Winery in Texarkana, Texas (http://fayjwinery.com/), offered GATA three mixed cases of wine for use in a potential fundraising drawing. Not only that, but since he is in the private-label wine business, Fay offered to put a special GATA label on the bottles. 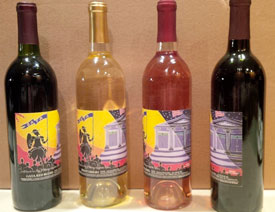 With the permission of GATA artist Alain Despert, who painted the emblem of our campaign in pursuit of free and transparent monetary metals markets, we sent Fay an image of Alain's painting and he quickly adapted it to what may be the most colorful wine label ever. Here's a photo of some of the GATA private-label wine.

Fay also shipped a few bottles to your secretary/treasurer and GATA Chairman Bill Murphy for us to sample the other night. When we awoke the bottles were empty and we couldn't remember which ones we liked best, but then we realized that they are all that good.

So GATA will run a fundraising campaign throughout December. Every donor this month will receive credit with the Fay J Winery for one drawing ticket for every $10 donated. If you want to be entered in the wine drawing for your donation by credit card, please send a note to me at [email protected], or, if you donate by check via U.S. mail, include a note with your e-mail address or phone number.

Your secretary/treasurer will forward to Fay the amount of your donation and your e-mail address or phone number, Fay will enter you in the drawing, the winners will be drawn in the first week of January, and Fay will contact them to arrange shipment of their case of wine.

Fay can ship wine only within the continental United States, but if a drawing winner lives beyond those borders, he will be welcome to collect his case in person in Texarkana and drink it there or, more practically, sell it to GATA, whose board members will promise to find good use for it at their annual meeting, or maybe even before.

All this will be a lot of effort on Fay's part, on top of his contribution of the wine, so GATA is very grateful to him. Indeed, if we can make this fundraising drawing work, we may try marketing GATA private-label wine through the Fay J Winery. A bottle of GATA wine on your dinner table when you're entertaining guests or a bottle given to friends during the holidays might be a great way of showing your support for the cause.

So please consider making a donation to GATA this month. Your contribution will be doubled by Stefan Gleason and Money Metals Exchange, you'll sustain our struggle, and you might win a case of great wine. With luck before too long you may be able to pop open a bottle to celebrate the defeat of the market riggers.