Understanding Gold (and Silver) Comes from the Heart, Not the Brain

The title of this essay is part of a statement made by Stewart Thomson, editor of the investment letter, Graceland Updates. His full comment reads, “It takes more than viewing charts and government debt numbers to understand gold as the world’s ultimate asset. What it really takes comes from the heart, not the brain.”

For thousands of years, humankind has understood the magical draw (and sense of security) that owning precious metal can bring.

It satisfies the core requirements that make it a medium of exchange par excellence.

It's durable. It's divisible. It's consistent. It's convenient. It's intrinsically valuable.

There's a sixth reason, which Doug Casey elaborates upon when he talks about gold's attributes above.

Unlike what David Morgan refers to as "paper promises" created at the stroke of a pen, run off on a printing press, and devalued to the point where a central bank can no longer afford to pay for the paper and ink – neither gold (nor silver) can be created out of thin air.

As Doug so ably concludes:

These are the reasons why gold is the best money. It’s not a gold bug religion, nor a barbaric superstition. It’s simply common sense. Gold is particularly good for use as money, just as aluminum is particularly good for making aircraft, steel is good for the structures of buildings, uranium is good for fueling nuclear power plants, and paper is good for making books. Not money. If you try to make airplanes out of lead, or money out of paper, you’re in for a crash.

It's why central bankers around the globe are adding gold to their "monetary" reserves at the quickest pace in 50 years. It's why Germany has – for the first time since WW II, begun buying gold. And it's why they are engaged in a multiyear effort to repatriate it from the U.S. and Great Britain, where it's been stored for security reasons since before WW II.

It's why Poland not only has been making new purchases lately, but recently took delivery of 100 tons of the yellow metal that had been in "safe-keeping" from London, since just before Germany overran their country in 1939. Why now? Maybe because, well, your gold seems to be so much more secure when you have it "in hand."

It's why small scale (artisinal) miners around the world risk their lives and health – often damaging the environment – in order to acquire even the smallest amounts of it.

And it's why you should hold some too. Reflect on the state of geopolitical affairs around the globe. Look at the trend in motion where banks are – or soon will – charge you for the privilege of saving some of the paper currency you've earned.

Forcing you to spend seed corn on things you don't need, just to keep their own financial Ponzi schemes from falling to earth.

They want to drive you into a non-cash environment where your assets are nothing more than digital entries that can be monitored as to what, when, and where you spend them. That can be "debited" by the government at will. All of which you'll have the privilege of being penalized for if you don't spend as much of your savings as edict demands.

What's the definition of a bull market? In classical technical analysis (TA), when the price of something – in this case gold (and in our discussion silver too, since the two metals' directional pricing is so closely correlated) – drop below or break up through an area that previously hosted a well-defined price level, chartists see this as something important.

Earlier this year, gold rocketed above $1,360, a level suppressing prices for over 5 years, giving evidence that it could now could move much higher. Sure enough it did, hitting $1,560 just two months later.

A second "tell" was that in breaking above $1,360, it left a large gap (area where no trading takes place), which as of this writing has yet to be filled (traded back into).

But one of the most important clues as to the staying power of a new bull or bear run is when a formation like the one shown for gold nearby is created.

A series of higher highs and higher lows tells anyone who looks at such a chart, that as long as this pattern continues going forward, the bull shows serious intentions of "movin' on up"! 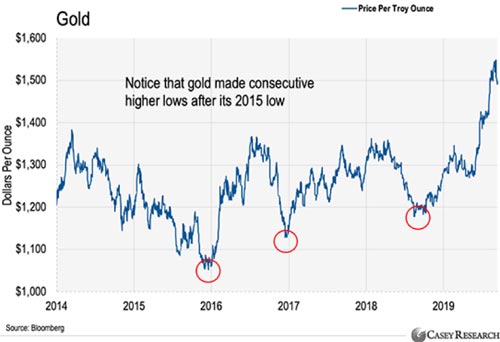 The fact that gold penetrated $1,400 and then $1,500 so easily on the upside, gives us confidence that the yellow metal has the potential to challenge still higher levels during the first quarter of 2020.

Holding gold and silver in your hand will make you smile. If you've already started a gold and silver acquisition program, take out a coin or bar and hold one of each in your hand (As long as it's not a collectable coin with numismatic value beyond its metal content!).

Rub your thumb and forefinger back and forth on its shiny surface. Feel its weight in your palm. Think about how for much of recorded history these two metals have "been there" as insurance, providing a store of value during the most unpredictable and dangerous times in history.

Think about how they're recognized and accepted around the world in exchange for goods and services – maybe even for one's life! (To this day, elite military units operating anywhere on the globe carry a few 1/4 and 1/2 ounce gold coins in their kit – just in case.).

The importance of having some precious metal becomes easy for our minds to grasp, does it not? When you consider having some in your hand, in your pocket, or stored away in some safe space known only to your and trusted family members – there to serve as insurance for loved ones and yourself...

...chances are it will bring a smile to your face, and you will be able to see and feel that a true understanding of what gold and silver represents really does come from the heart.