THE GLOBAL DEBT TICKING TIME-BOMB: The Reason To Own Gold & Silver

As Global Debt reached a new record high of $250 trillion this year, gold and silver came briefly back on the radar for investors. After five long years, the precious metals finally broke through key technical levels this summer. However, after the Fed started the Repo Operations in September and the $60 billion a month of “Not-QE” in October, the focus returned once again to the Bloated Stock and Bond markets.

What a drastic change from the Fed’s policy last year when it was reducing the size of its balance sheet until the stock market crashed in December 2018. Since then, the huge stock market reversal and all the additional gains have been Fed liquidity induced. Sven Heinrich continues to write and talk about this on his website, the Northmantrader.com. Here is a recent chart from his article, System Failure:

At the bottom left hand of the chart corresponds to the bottom of the stock market in January 2019 when Fed Chairman Powell caved in by ending the reduction of the Fed’s balance sheet. Since then, there have been three rate cuts, Repo Magic and $60 billion a month of U.S. Treasury purchases because there aren’t enough suckers to absorb all the new U.S. Govt issued debt.

The U.S. economy isn’t even in a recession, and the Fed is acting as if it was 2008-2009 all over again. What happens when the U.S. economy finally rolls over?? It’s going to be terrible news, especially considering the record amount of global debt. According to the IIF, the Institute of International Finance, global debt reached a record high of $250 trillion in the first half of the year. However, the IIF estimates that global debt will reach $255 trillion by yearend. 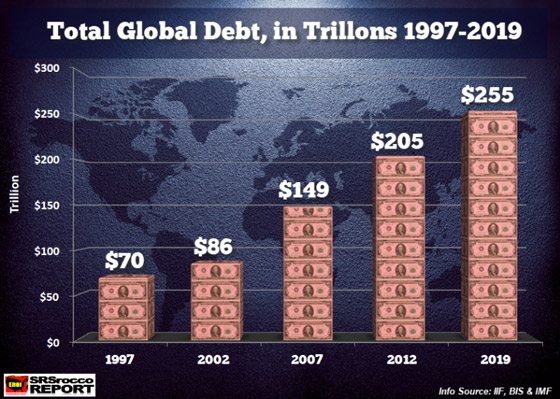 In just ten years since the 2008-2009 financial crisis, the world added another $100 trillion in debt. Now, the majority of that debt went into the Stock, Bond, and Real Estate Markets. This is precisely why the U.S. stock market has reached an all-time new high. Unfortunately, when the U.S. and the global economy finally enters into a recession-depression, the asset values will crash while the debts remain.

GOD hath a sense of humor.

We saw this happen during the U.S. Subprime Housing Bust. After millions of Americans refinanced their homes by cashing in on the equity, they were upside down with their mortgages when real estate prices plunged. The brutal truth of the market is that the DEBTS will remain while ASSETS evaporate.

In just the first half of 2019, total Global Debt increased by $7.5 trillion. Thus, global debt jumped by more than twice the value of all world gold and silver investment of $3.5 trillion: 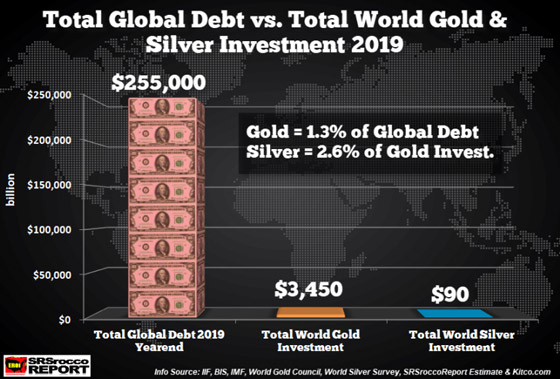 According to the World Gold Council, World Silver Survey, and my estimate of additional privately held silver bullion, the total value of global gold investment is $3,450 billion, while silver trails way behind at $90 billion. These figures are based on 2.3 billion ounces of global gold investment and an estimated 5 billion ounces of silver. The World Silver Survey reported that above-ground silver stocks in 2018 were 2.5 billion ounces. I added 2.5 billion oz more of possible private held silver bars and coins. I doubt there is that much privately held silver, but even if we say there was 5 billion oz of silver investment held, it’s only worth $90 billion based on an $18 spot price.

As we can see in the chart above, total global debt will reach $255 trillion by the end of 2019 versus $3.4 trillion worth of gold and $90 billion in silver. Thus, the total world gold investment holdings are only 1.3% of the outstanding global debt, while world silver investment is a measly 2.6% that of gold.

Currently, the massive Global Debt Time-Bomb isn’t impacting the values of the precious metals. This is because the mentality driving the market isn’t considering the FUTURE ENERGY needed to pay back all this debt. We must remember that Debt represents future obligations that can be paid back only when the global economy BURNS ENERGY.

The following chart from Louis Arnoux, based on work from the Hills Group provide the MAIN FACTOR that is pushing the global economic and financial economy to the brink: 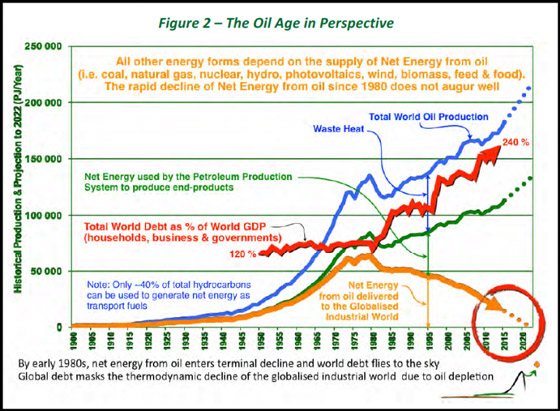 This chart is very easy to understand. All one has to know is that as the NET ENERGY from oil delivered to the market (Orange line) has declined, the total World Debt to GDP (Red line) has increased. The data in the chart is a bit old, but the trend continues in the same direction. Based on the total global debt reaching $255 trillion by the end of 2019 and the estimated $88 trillion in world GDP, that equals a World Debt to GDP of 290%, much higher than the 240% shown in the chart. So, as you can see… the world continues to head towards the ENERGY CLIFF.