The first part of our 2020 Outlook covered the Big Picture Backdrop for Precious Metals. This second part focuses on the fundamental and technical setup for gold and silver markets.

Precious metals markets enter the New Year with some impressive upside momentum. Are gold and silver poised to deliver big gains in 2020?

Before answering that question, let’s review the year-end closing prices and yearly gains the metals recorded in 2019:

Gold and silver each notched their best annual gains since 2010. Meanwhile. platinum emerged from its most deeply depressed levels since 2004 to make a run for a new bull market. And palladium posted record high after record high.

All in all, it was a constructive year for metals bulls – though it could have been better. Gold and silver finished strong but below their high points from early September (when gold traded just above $1,560 an ounce and silver hit $19.75).

One of the most remarkable technical developments of 2019 was the gold:silver ratio spiking to 95:1 – its highest level since the early 1990s. It finished the year at 85:1. 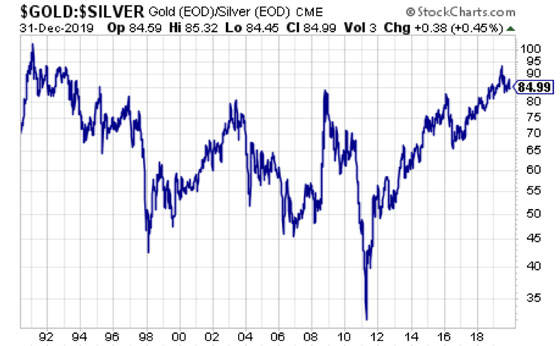 A continued decline in the gold:silver ratio toward more historically normal levels would entail not only an outperformance in silver – but also likely a bull market in both gold and silver.

The last powerful decline in the gold:silver ratio from 2009 to 2011 translated into silver surging up over $49/oz and gold making a record high at $1,900/oz.

Silver may be the metal to watch (and own) in 2020. If global industrial and investment demand picks up even slightly, supply will struggle to keep pace.

In fact, silver mining supply is heading in the opposite direction. The Silver Institute’s World Silver Survey shows production falling at an annual rate of 2%.

Mines have been depleting their silver reserves and haven’t had the incentive to develop new projects given low spot prices and geological challenges due to declining ore grades.

According to Katusa Research, “The average head grade has fallen by over 50% since 2010. This is not a good situation for a miner. In a world where input and production costs are rising yet profit per tonne of rock has fallen by 50%, this poses serious long-term potential problems.”

Investing in a miner is always in iffy proposition, even if you do your homework. The busts tend to outweigh the booms.

And in the case of silver miners, most are primarily in the business of mining other metals (such as lead, copper, nickel, zinc, or gold) – and only mine silver as a byproduct.

The lack of a healthy primary silver mining industry can work to the advantage of physical silver investors. It means that supply will remain constrained in the years ahead.

Even if higher spot prices begin to make mining silver more profitable, the beaten and battered industry won’t have the immediate capacity to grow production to any significant degree. It will take years of rebuilding.

In the meantime, once silver breaks above overhead technical resistance from $20-$21/oz, the path should be clear for a run toward its old record high.

The other metal with big upside potential in the 2020s is platinum. It has gotten clobbered by palladium in recent years. But the extreme price disparity between the two now makes platinum a compelling alternative for automakers and other industrial users.

“Platinum had fallen out of favor among investors after Volkswagen AG’s emissions-cheating scandal in 2015 prompted commuters to turn away from diesel vehicles. The market has overestimated the decline in demand for autocatalysts,” reports Bloomberg (via Mining.com)

“By 2025, about 850,000 metric tons of palladium used in autocatalysts could be substituted with platinum…”

For now, though, platinum remains in a supply surplus while high-flying palladium is in a chronic deficit. An investment in platinum should therefore be regarded as somewhat speculative.

Although further downside in price is likely limited, platinum could spend much of 2020 basing out before substitution kicks in to push prices much higher.

As always, precious metals investors should first stake out core positions in gold and silver. They are money, first and foremost.

Monetary demand for gold – led by central banks in Russia, China, and elsewhere – is likely to remain strong in 2020.

Even if the global economy falters and causes industrial demand for the white metals to slip, gold buying won’t necessarily go down. It could even increase on a flight to safety.

Gold may not look “cheap” at over $1,500/oz, but it is cheap relative to the U.S. stock market. And the protection physical gold provides from the risks of financial turmoil is invaluable.