Cannibalization of the Financial System Will Force Investors into Silver

By looking at the symptoms taking place in the financial system, we can see just how bad the situation is becoming.

The chart below shows the amount of asset purchases the Federal Reserve has added to its balance sheet over the past four months versus the total value of all global above-ground silver stocks: 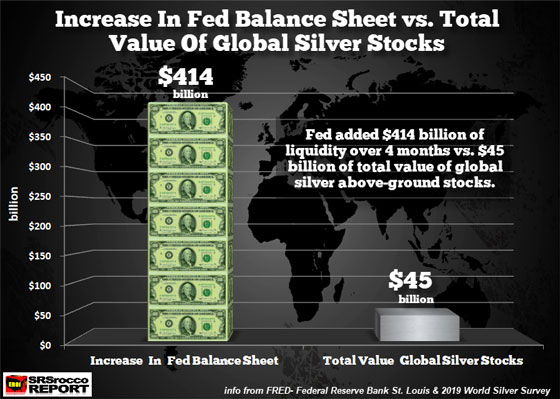 I decided to compare the Fed’s balance sheet to silver rather than gold because I believe silver will be the GO TO ASSET once investors get PRECIOUS METALS RELIGION.

Unfortunately, Palladium’s value will crash once the global economy heads into a depression. Even though Palladium and Platinum are precious metals, the overwhelming majority of investment demand is in silver and gold.

Palladium and Platinum’s value is based more on industrial demand rather than investment demand. KISS – Keep It Simple Stupid. Acquire the 2,000+ year history of money… gold and silver.

In the last four months, the Federal Reserve added $414 billion to its balance sheet. What a change compared to the $708 billion in assets the Fed sold back to the market (primary dealers) over a two-year period. 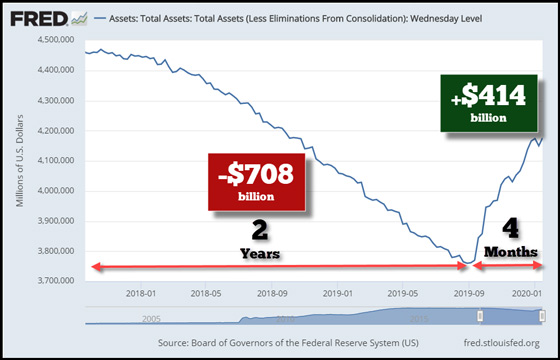 The Fed was selling an average of $118 billion of its assets every four months over the 2-year period. However, it purchased more than three times that rate of $414 billion in the past 4-month period.

Now, think about this. The Fed announced on October 15th that it would start purchasing $60 billion a month of U.S. Treasuries. The Fed has purchased at most, $240 billion in U.S. Treasuries in the 4-month period. But, the total increase in the Fed’s balance sheet is $414 billion, or $174 billion higher.

So, it also has been slowly adding assets (liabilities) via its Repo Market operations. I call them liabilities because there is no real market for them.

And, as time goes by, the world is going to watch as the majority of so-called ASSETS turn into LIABILITIES.

As I mentioned in previous articles, I believe the “FINANCIAL CRISIS” started on September 15th, when the Fed had to step in with emergency Repo Market Operations and has continued to do so.

While the markets believe the Fed has fixed the problem, it’s only going to get worse. Why? Because the Thermodynamics of oil depletion doesn’t stop and the quality of oil (or net energy) that makes it to the market continues to decline.

Thus, The Federal Reserve increased the value of its balance sheet over the past 4-month period by nearly 10 times the value of all the global above-ground silver stocks: 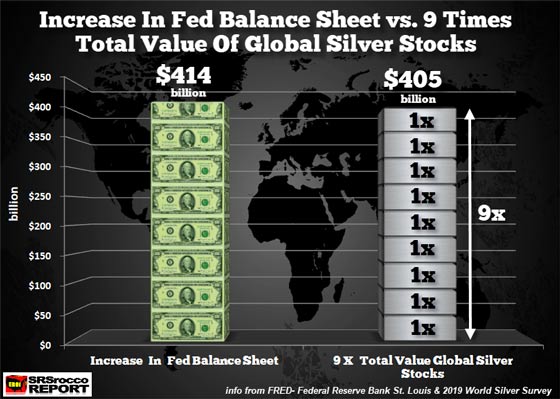 Based on a global value of available silver stocks (2.5 billion oz X $18 = $45 billion), the Fed’s balance sheet purchases of $414 billion are 9.2 times all the investment silver held in the world.

Investors do not understand this CRITICAL comparison… YET. But, they will in time.