At the current price, one could buy less than one and one-half troy ounces of gold without activating customer ID paperwork, and for businesses – a criminal background check!

This is an additional decline from the €15,000 mandated just two years ago. Set to become law in early 2020, the effect was immediate, as long lines outside a coin shop in Cologne show.

Some of the world's largest banks – including several in Germany – have long made a habit of laundering literally billions of dollars, euros, and assorted financial instruments from questionable customers.

This all begs the question as to how further squeezing "the little man" by imposing onerous reporting over relatively tiny amounts of gold sales is going to accomplish anything constructive.

It turns out that this legislative effort is directly tied to European Union (EU) guidelines laid out in the anti-money laundering directive (AMLD5), requiring member state compliance. And some people wonder why Britain's Labour Party – whose platform proposed adding still more regulatory burdens to the population – recently suffered such a devastating defeat.

"They don't want normal people to bank run their scam paper. Gold and hard assets is how you protect yourself from inflation. They (the governments/banks) want to know every single person that tries to get out of their cage..."

"...Gold is thus seen as one of the final hedges against irresponsible government policy, and the proposed new limits on precious metals, will leave residents of Germany with even fewer options."

"I live in Germany and the thing is we have had a full-blown shortage going on for weeks now. All these people in the line will go home empty handed. The smart ones have been exchanging paper for gold weeks and months ago... you have these (off-putting) ones who think the supply will wait for them when they lift (themselves up) in the last second. The retailers have been sold out for weeks already. It might clear up in January when the new law is in place, but I am not betting on it. It could also indicate that we are close to something bigger."

Here's the rub, and you can take this to the bank…

Authorities in most countries in the world, and sadly becoming more common by the day in that bastion of "democracy" – the U.S., at every level equate the desire for privacy with doing something "nefarious." Some of Merriam-Webster's numerous words define the term as "bad, evil, unethical, unlawful, wicked, wrong," etc. Take your pick.

Ignore the clueless non-observer who reels off the knee-jerk comment that "If I don't have anything to hide... It's a very dangerous slide from "Innocent until proven guilty" to just the opposite.

It's a corrosive trend that has all too-commonly become the operative principle of those whom we've elected to serve us, but who have now decided, in their finite wisdom, that we should serve them.

Not just "the man in the street." Despite the excitement (and profit-building opportunities) offered by gold and silver from 2001-11 affected not just "the man on the street" but CEOs of most mining companies who continue to project the future by looking into the rearview mirror. 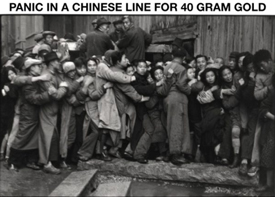 The knock-on effect meant that less money was spent on discovery, leading inexorably to lower production.

The overall result is that from the last decade, 2020 Reserves (the highest and most economically recoverable category of known ore deposit) for the world's largest gold mining companies are down fully 26%.

David Morgan has long counseled newsletter subscribers to The Morgan Report, in addition to the tens of thousands who (weekly) receive The Free Morgan Report to start an accumulation program by acquiring physical gold and silver – viewing its role as insurance first, profit-potential second.

Own precious metals – i.e. honest money – paid for by fiat "paper promises." On numerable occasions, over the thousands of years in which it has reliably fulfilled these roles, gold (and silver) have turned out to be literal life-savers in their own right.

Richard Davies toured Aceh, Indonesia after the 2004 tsunami that killed 250,000 people. He noted, "I met many survivors who were able to sell jewellery they were wearing... Wearing a gold bangle is like having enough cash on your wrist to employ a builder for a year... This traditional form of finance insulated Aceh and provided its entrepreneurs with rapid access to cash."

If this doesn't get your attention, then you're just not paying attention!

Long before the move into gold becomes a full-fledged "rush," smart money with deep pockets will have been activating their own accumulation plan.

The chart below from Goldman Sachs research indicates what's been going on under the radar. Gold ETF (visible) accumulation – which by the way has now officially reached record levels – is being substantially eclipsed by the build in non-transparent gold investment, as it is ensconced around the world in private vaults, kept "in hand" near one's residence, or simply buried in the back yard. 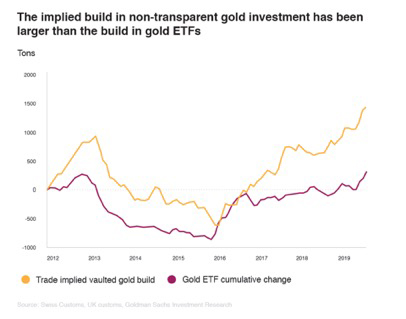 It's not too late to accumulate! These and other data points, such as the current low level of U.S. Mint American Gold Eagle production – which follows demand – indicate that the majority of potential investors have yet to enter the gold space.

Act to strengthen your financial immune system by accumulating the desired level of metal now, before the ongoing gold-build morphs into a public-mania-infused "gold fever." And before the concept of financial privacy and flexibility has become a relic of the not-too distant past.