George Washington Tried to Warn Us

Washington also spoke of the evils of unbacked paper currency.

In a 1786 letter to Thomas Jefferson, Washington wrote, “Paper money has had the effect in your state that it will ever have, to ruin commerce, oppress the honest, and open the door to every species of fraud and injustice.”

And in a 1787 letter to Jabez Bowen, Washington stated, “If in the pursuit of the means we should unfortunately stumble again on unfunded paper money or any similar species of fraud, we shall assuredly give a fatal stab to our national credit in its infancy. Paper money will invariably operate in the body of politics as spirit liquors on the human body.”

George Washington would undoubtedly be horrified by the economic and political power wielded today by the currency-creating cartel known as the Federal Reserve.

The Fed has rendered our financial markets entirely dependent on fiat currency infusions by the trillions. And it has enabled our elected officials to spend and borrow like drunken sailors with no sense of responsibility – because they can always get the Fed to paper over their excesses.

One way sound money advocates can honor America’s first (and arguably greatest) President is through the America the Beautiful series of 5-ounce silver coins. Yes, at five full ounces, these coins make quite an impression. 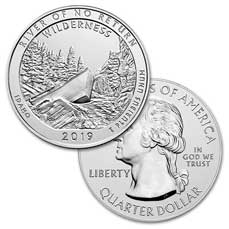 The coin's reverse (or tails) side features a national park or historical site. The list of sites to adorn the 56 coins were chosen in a process which included state governors, the U.S. Interior Department, the Secretary of the Treasury, the U.S. Commission of Fine Arts and the Citizens Coinage Advisory Committee.

The first coin in the series, honoring Hot Springs National Park in Arkansas, was issued in 2010. Four additional coins followed with the same 2010 date. Each year thereafter, five new designs have been released.

These massive 5-ounce coins will be a remarkable addition to any silver holding. And, because they can be purchased without paying high collectible premiums, they also make great investments.