When investors become increasingly concerned about the financial system, they rush into physical precious metals. And, this is precisely what we see taking place at the U.S. Mint as sales of Silver Eagles surged in the first three days of March versus the entire month of February. The U.S. Mint hasn’t seen this type of buying for several years.

For the past three years, annual Silver Eagle sales fell below 20 million, reaching a low in 2019. However, that may all change this year as the global contagion spreads, motivating investors to shed paper assets and move into physical precious metals.

For sure, investors should be worried when the Fed starts to do “LIQUIDITY BOMBS” via its Repo Operations as stated by Sven Heinrich, the Northman Trader: 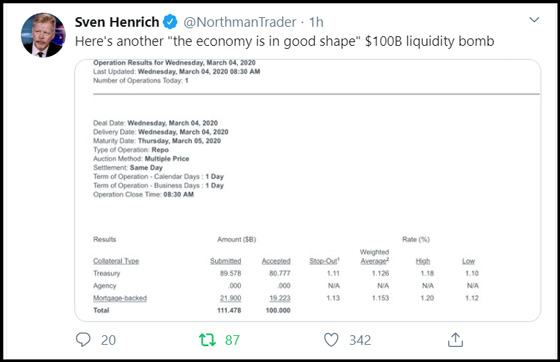 While the Primary Dealers submitted requests for $111.478 billion this morning, the Fed accepted $100 billion. Add that to the single-day Repo of another $100 billion yesterday, which I wrote about in my article; FED REPO INJECTIONS HIT RECORD LEVEL: Global Contagion Negatively Impacting Financial Markets. The Fed Repo Operations yesterday purchased $100 billion (overnight) and a $20 billion (two-week period) for a total of $120 billion.

On top of the record Fed Repo Operations, then there was the “EMERGENCY” 50 basis point rate cut yesterday that should have pushed the markets up considerably.

However, the Dow Jones Index fell nearly 800 points by the end of trading… a very bad sign indeed. While the Dow has recovered this morning, I believe this is only a temporary situation as the global contagion continues to spread negatively impacting the world’s supply chain. Let’s face it; the worst is yet to come.

With precious metals sales surging over the past few weeks due to the risk of the global contagion, the U.S. Mint website reported that 675,000 Silver Eagles were sold in just the first three days of March.

Now, compare that to the total 650,000 sold during the entire month of February: 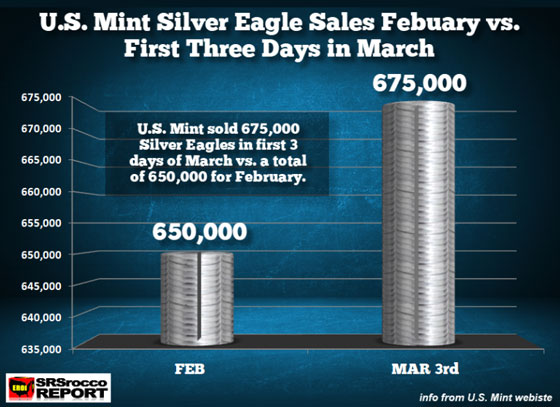 Again, it has been quite a while since the U.S. Mint has experienced this type of buying. It will be interesting to see if this trend continues throughout the rest of the month. 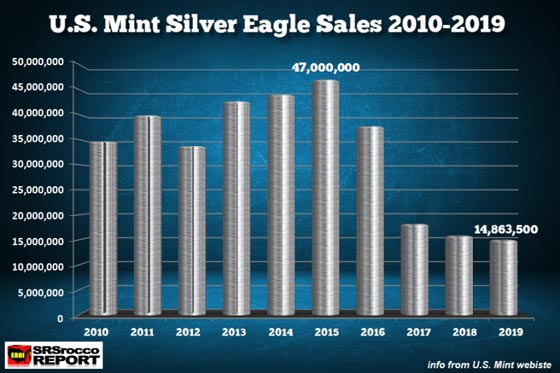 However, as I stated, this all can change in 2020 as this global contagion spreads, forcing investors to move into physical precious metals to protect wealth.

I believe precious metals investors should be aware that it may be challenging to get available supplies of physical gold and silver bullion in the future… only at much higher prices.