The last few days have been like nothing most of us have ever experienced – or are likely to experience again in our lifetimes.

Panic has spread from the streets of Wuhan to the grocery stores of America’s heartland, from nursing homes to the Federal Reserve Board, from the stock market to the gold and silver markets.

These unprecedented times are testing the mettle of precious metals investors like never before.

Gold and silver are meant to provide safe haven from financial turmoil. Safe haven demand for physical bullion has indeed surged. The pace of buying has been so furious in recent days that some dealers are literally running out of product to sell, and the scarcity has driven premiums are sharply higher.

So why haven’t gold prices skyrocketed? For one thing, the bullion market is relatively small compared to the highly leveraged futures market that sets spot prices. Gold can get pulled down on any given day for no other reason than panicked traders need to sell it in order to raise cash.

When comparing gold to other assets, however, the monetary metal is performing exactly as it should during a time of crisis. Gold has risen strongly when measured against a crashing stock market over the past few weeks. It has spiked to multi-decade highs versus both crude oil and silver.

The gold:silver ratio has now entered previously uncharted territory. On Monday it spiked to 116:1. Put another way, a single ounce of gold could buy a staggering 116 ounces of silver. 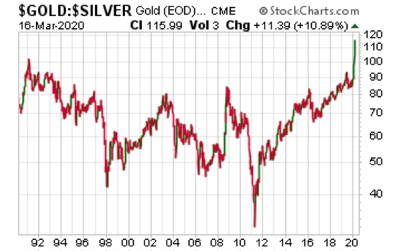 Never has silver been as cheap to acquire in real terms as it is today. Never has the silver market traded so wildly disconnected from its fundamentals. Never have the silver bullion and silver futures markets diverged so greatly.

Whereas shortages and premium spikes are taking hold in American Eagles and other popular silver bullion products, the opposite is occurring on the exchanges. For example, one exchange-traded silver vehicle, Sprott Physical Silver Trust (PSLV), briefly traded down to a record 10% discount to its own net asset value.

On Monday, another inexplicable trading anomaly occurred. On a day when the general stock market suffered a 13% nosedive, the Silver Miners ETF (SIL) surged higher by 13% -- and it's surged again today. Yet spot silver prices had plunged by 12% at the same time.

It makes no sense, unless the markets are completely broken and totally arbitrary at this point. Or unless big money counterintuitively flowed into the mining sector because the silver spot price has lost credibility.

Perhaps mining stock investors believe the actual physical silver market is already beginning to dictate higher prices (as reflected in surging premiums for silver coins) than what are being quoted in the paper market.

Perhaps we just witnessed a capitulation bottom in silver and at least a temporary peak in investor fear more broadly. The VIX volatility index, also known as the fear index for the stock market, spiked on Monday to exceed the fear levels registered during the depths of the financial crisis in 2008. 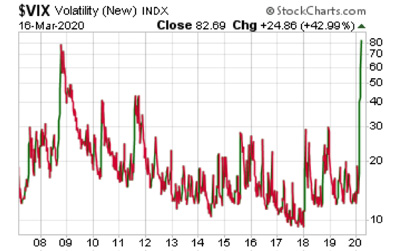 When markets are driven by extreme fear, they don’t produce rational outcomes.

Strange, anomalous, and unprecedented price action in certain assets creates once-in-a-lifetime opportunities to profit as investors calm down and come to their senses. For example, you may never again get an opportunity to buy silver at less than 1/100th of the quoted gold price.

Unfortunately, it’s difficult to obtain physical silver at all during moments like these. Bargain hunters have cleared out coin dealers of most of their inventories.

The upshot is that a new uptrend in silver, and a corresponding narrowing of the gold:silver ratio, can be expected to extend for years. You should have plenty of opportunities to buy on the way up before the metal becomes expensive.

There is no need to panic buy in fear of missing the bottom. We don’t know whether it will be a “V”-shaped bottom or one that drags out and gets re-tested again in the weeks ahead.

The current economic crisis is much broader in scope than previous crises centered on Wall Street and the banking system. The Fed can’t fix it by cutting rates to zero and pumping more doses of Quantitative Easing into the bond market.

This is a Main Street crisis triggered by an invisible killer that will claim many more victims. President Trump and his top medical advisors now fully expect the number of infections to grow and the strain on the medical system to get worse before it gets better.

Will the carnage on Wall Street and in metals markets get worse, too? Nobody knows for sure. Nobody could have foreseen that a black swan event like a global pandemic would trigger a near total shutdown of the economy.

What we do know is that every other panic selling event in recorded history has produced fantastic buying opportunities for investors who didn’t lose their shirts or their minds. This one will likely be no different.