Item: March 16, 2020. A huge poly-metallic (gold, silver, copper) mining operation in Mongolia "has suspended operations" after authorities "restricted the movement of goods and people within the country."

Item: March 17. In Peru, one of the world's largest primary silver-gold producers has its 4 mines "temporarily suspended" following the Government's Declared State of Emergency.

Item: March 18. A Canadian mining major suspends construction of a $4.7b copper mine upgrade in Chile affecting 15,000 workers.

Item: March 20. Argentina declares a state of emergency and imposes "a nationwide mandatory quarantine starting today." Silver and gold mines across the country move to halt operations, except for "a reduced workforce to ensure appropriate safety, security and environmental systems are maintained."

Item: March 30. Peruvian authorities extend their halt of transportation until at least April 13.

This list could be much longer, but you get the idea. Miners and explorers around the world are being told to stop production, move to "care and maintenance" or "disperse the workforce" – all due to the C-Factor. Which of course refers to the rapidly – spreading global pandemic known as novel coronavirus, or COVID-19.

Being a new strain that has not been previously identified in humans, earns this virus the moniker of "novel." Enough is still unknown about how it spreads and what it takes to halt the contagion, that even the experts still search for answers.

These unknowns – along with the government and public response to it – means this is slated to become the most costly financial crisis in modern history. Asset classes crater across the board, with mining shares diving alongside S&P 500 stalwarts.

What's surprising to those who do not remember 2008 is initially both silver and gold tanked. In part it's because when funds – some of whom are leveraged 30:1 – get a margin call, they sell what they can. That includes precious metals, further depressing the price.

The Paper Price Is Not the Physical Price

Beneath the surface, recent massive demand by the public for physical silver and gold makes it apparent that the quoted "paper metals" price bears little reality to what a person pays – if they can find the "hold in your hand" product at all.

The U.S. Mint has nearly run out of American Silver Eagles (ASEs) and extended back orders are the norm. Premiums have risen from about $3 to $8 or even $10 over spot.

This Situation Is Novel in More Ways Than One

At this writing, most mines remain open. But the suspension-of-production list steadily grows.

It's safe to say that operations in every country on the globe have been, or soon will be affected. Projected downtimes assume 2-3 weeks, but some places are expecting a 6-week-plus hiatus.

The reality is that no one really knows how long this state of affairs will last, let alone return to normal. Even when a mill temporarily shuts down, it's not just a matter of flipping a switch and returning to full-scale production. 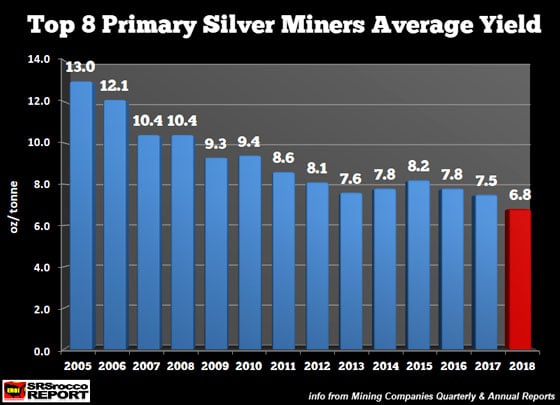 The metals, especially silver, may have seen their best production levels for some time. Yields have steadily declined for the last decade.

Fewer large discoveries, increased regulations, costly infrastructure and longer lead times, have conspired to just about double the number of years it takes from discovery to production.

Being an industrial metal, silver consumption will probably decline this year, but... as David Morgan has long noted, "Important price changes occur on the margin." He means that investment demand is the big driver for silver prices. And lately, has that demand ever been robust!

Metals' dealers report the strongest buying they've witnessed in recent years – some for as long as they've been in business. Selection is down, premiums are way up and delivery dates pushed out from days to somewhere on the horizon.

Readers in this space are aware of the almost daily new uses for which silver is being employed in industry and commerce. Now there are two new ones – difficult to quantify initially, but unwise to ignore on the demand side.

Its ultimate level of acceptance is yet to be determined, but the coin's numerous uses, including spending it for merchandise and services, or simply holding as an investment bet on rising silver, make this an intriguing consideration.

Silver is a COVID-19 Killer. Second, it appears that more locales are using decontaminants to disinfect city streets, public buildings, and airport terminals.

One effective and non-toxic solution of which I'm aware is made up of potassium iodide, water... and silver. How much silver? Hard to say right now, but as it becomes more widely used?

The Tectonic Plate Collision of High Demand and Declining Production Means That "Houston, We Have a Problem"

Few investors have considered that, as the ripple effect of mines shutting down spreads (if only for a few weeks but possibly much longer), 2020 gold, copper, and silver production are set to fall off a cliff.

Let's say there is only a 4-week period between when most mines "go offline" and return to normal output. It's possible that 10% or more annual silver production may not take place at all!

2020 was already set to become the fourth straight year of declining silver production. Last year, the total was about 1 billion ounces.

Ask yourself what's going to happen if the demand spike runs up against say, 100 million ounces less silver than was available the year before?

I would suggest the result will include skyrocketing premiums, and an even greater disconnect between the paper quote and the actual physical sales price.

The Removal or Destruction of One-Tenth of Silver Production

My use of the word "decimate" in this article’s title was intentional. Derived from the Latin word "decimates," it meant "the removal or destruction of one-tenth."

Depending on how much the C-Factor impacts mining in 2020, the premise assuming "the destruction of one-tenth" of this year's silver production could turn out to be conservative by half.

If for some inexplicable reason you're still waiting to acquire the silver (or gold) you hope to purchase, the question right now is, "How lucky to you feel?"