PERU EXTENDS LOCK-DOWN ALONG WITH MEXICO: An Estimated 40% Of Global Silver Mine Supply Now Offline

Now that the Peruvian Government announced an extension of the country’s state of emergency until April 26th, the world’s first and second-largest silver producers have taken 40% of global silver mine supply offline for a month. Actually, Peru first announced its national quarantine on March 15th. So, the country’s mines will be shut down for more than a month when the state of emergency is projected to end on April 26th. But, will it?

According to the Reuters article, Peru’s Vizcarra extends state of emergency to April 26th; the country will remain on lockdown for an additional two weeks: 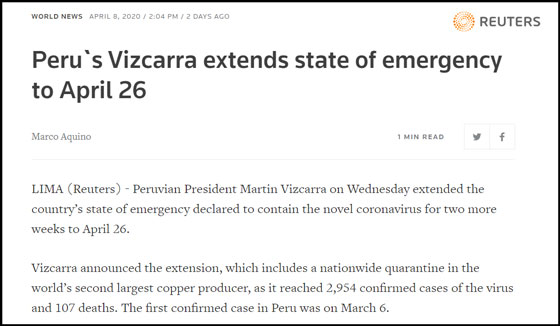 Including Mexico’s state of emergency issued on April 2nd to last until the end of the month, the total estimated silver production lost from these two countries could be 28 million oz (Moz). That is 40% of global mine supply. But, what if additional mines have been shut down in other countries? 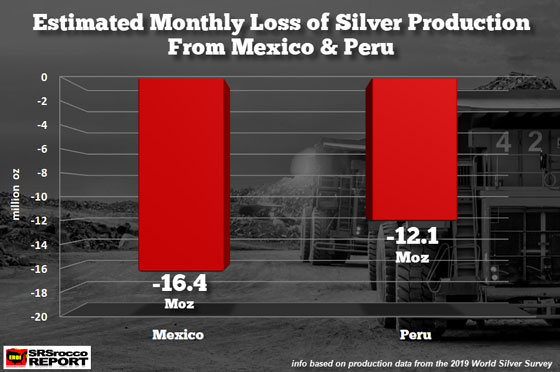 As I stated in previous articles and my Youtube video updates, we could see between 100-150 Moz of global silver mine supply lost this year. However, if we just consider the estimated 28 Moz of silver production lost from Mexico and Peru, that would equal 28,000 of the 1,000 oz wholesale silver bars.

With the continued surge in demand for silver bullion pushing availability of products back weeks and for months, it has also impacted the 1,000 oz wholesale silver bar market. How will the reduction of 28,000 wholesale 1,000 oz silver bars impact the market in the next few months?? Good question.

Lastly, if the oil price continues lower, it is possible that the silver price will fall even further. However, this will not be the BUYING OPPORTUNITY that many are hoping for. Why? A further decline in the futures silver price will only exacerbate the already tight physical market. So, don’t expect to be able to find much silver at lower prices.

As with the subject of INSURANCE… you don’t wait until there is a FIRE in the house to purchase fire insurance. It seems like the window of acquiring SILVER INSURANCE is running out, and will only become more difficult if the futures silver price falls lower.