April marks a second month of truly extraordinary developments in markets – from negatively priced crude oil futures to a record spike in unemployment claims to a lockdown-defying rally in stocks.

The financial media is touting the S&P 500’s surge of more than 13% in April – the biggest one-month gain for the index since 1974. 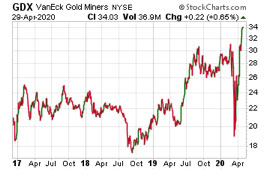 While stock market investors have made up a big chunk of their 2020 losses, the major averages and nearly all sectors within them are still down significantly for the year.

For the first time in a very long time, mining stocks are showing leadership. That has profound implications for precious metals markets.

For one thing, it suggests that gold and silver are back in favor as alternative, non-cyclical, safe-haven asset classes. Oftentimes during a major rally in the broad equities market, precious metals and mining shares get left behind – or even sold off.

Not during these times. Gold itself rallied to a multi-year high of $1,775/oz mid-month before taking a breather. A break from its current consolidation pattern to the upside would likely entail a run toward gold’s former all-time high above $1,900.

Relative strength in the GDX compared to gold has persisted throughout the month, which suggests mining stock investors are anticipating further upside in gold.

There is plenty of technical and fundamental evidence to support the thesis that gold is in a major bull market versus all fiat currencies and that it will soon trade up to new record highs in U.S. dollar terms.

The monetary backdrop has never looked worse for holders of U.S. dollars.

Interest rates have been pushed down toward zero at the same time as the Federal Reserve has embarked on an infinite asset-buying campaign.

At this week’s policy meeting, the Federal Open Market Committee pledged to maintain interest rates near zero for as long as necessary.

Policymakers also vowed to keep using any and all available tools to support the economy, which is currently contracting at a double-digit rate amidst nationwide COVID-19 lockdowns.

Fed Chairman Jerome Powell said the central bank is prepared to use its powers to push even more stimulus into the economy and “will do it to the absolute limit of those powers.”

The ultimate consequences for inflation are difficult to predict and won’t become clear until after the economy is allowed to begin functioning again.

The potential exists for a lot of pent-up demand to be unleashed and a lot of newly created Federal Reserve notes to push consumer and commodity prices sharply higher. 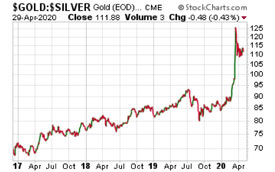 So far this year, gold has gained less on inflation fears and more on fears that everything else is at risk of collapsing. That showed up quite clearly in the gold:silver ratio spiking to over 125:1 in March – a mountainous peak never previously reached in modern recorded history.

The ratio didn’t come down as much in April as might have been expected given the rapid unwinding of the fear trade in the stock market and the upside breakout in high-risk mining equities. The gold:silver ratio closed Wednesday at 112:1 – still an extraordinarily wide spread between the two money metals.

A narrowing in favor of silver seems inevitable over time (years ahead). But as long as we remain in a crisis environment with an intentionally stunted economy, the gold:silver ratio can remain stubbornly elevated.

A major component of silver demand comes from industry, and much of the world’s industrial productive capacity has been taken offline.

At the same time, nearly half of the world’s silver mines have been shuttered during this crisis.

Even though the industry is contracting, investors are apparently optimistic that it can also become more profitable. Lower energy costs plus higher metal prices could certainly do the trick.

The mining sector as a whole has been forced to drastically decrease its production volumes instead of stupidly selling as much as it can at ridiculously low prices. In other words, it has been forced to adopt sound business practices in spite of its own apparent natural inclination to do otherwise!

Better profit margins and diminished output should bode well for both mining equities and the metals themselves.