The leading primary silver mining companies have experienced significant stock rallies from their lows in March. Some of the primary silver miners’ stock prices outperformed the competitors. Why? Could the silver miners with better stock performance be tied to their financials? Good question.

In the past, I looked at some comparisons to see why certain primary silver miners outperformed their competitors. In the chart below, I posted the stock performance of six of the leading primary silver miners since their lows in March this year versus the net income margin to total revenues. 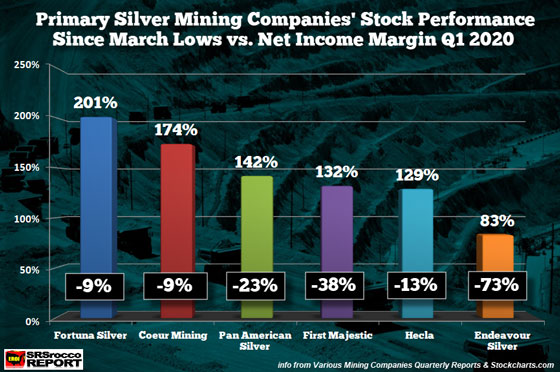 As we can see, Fortuna Silver enjoyed the best stock performance in the group by increasing 201% from its lows in March. On the other end of the spectrum, Endeavour Silver suffered the worst performance at only 83%, and this is likely due to the closing of its El Cubo Mine and horrible Q1 2020 financial results. I wrote about Endeavour Silver in my previous article and also on my SRSrocco Report Twitter Feed:

Endeavour Silver gets the TAKE ME OUT TO THE WOODSHED AWARD as it's losing money hand-over-fist.https://t.co/ZYDCfYbSs6 pic.twitter.com/n0J14R1GeC

Because Endeavour Silver lost a stunning $15.9 million in net income versus only $21.9 million in total revenues, that resulted in a net income margin of a NEGATIVE 73%. No wonder Endeavour Silver’s stock performance is DEAD LAST. Furthermore, the silver miners that enjoyed the best stock performance, Fortuna Silver and Coeur Mining, also had the lowest net income margin losses compared to the other four in the group. 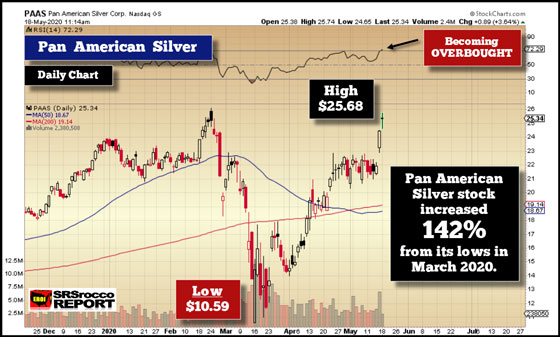 Ultimately, I see the primary silver mining stock prices outperforming the market as investors move into GOLD & SILVER ASSETS and out of STOCKS, BONDS, & REAL ESTATE.