Since I started researching the primary silver mining industry, the yields at many high-grade silver mines have fallen drastically. For example, Fresnillo PLC’s Flagship mine, the Fresnillo Mine, had seen its average yield decline from 15 oz/t (ounce per tonne) in 2005 to only 5.3 oz/t last year. That is one hell of a reduction in just 14 years… nearly 10 oz/t of silver yield evaporated.

Take a look at how much more silver the Fresnillo Mine was producing in 2005 compared to 2019… processing LESS ORE!!

As we can see, workers at the Fresnillo Mine processed more ore in 2019 to produce 20 million fewer ounces of silver. No wonder the cost to produce silver has risen from $4-5 per ounce back in 2005 to over $15+ an ounce presently.

Now, if we combine the top seven primary silver miners in my group, the average yield fell to a record low of 6.0 oz/t in 2019: 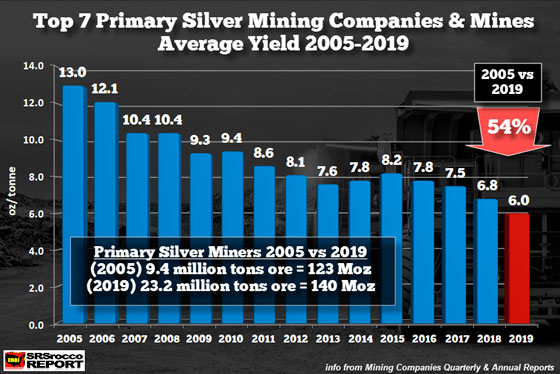 Also, Russia’s Polymetal International, Dukat Operations, saw its average yield fall to 7.7 oz/t last year down from 8.5 oz/t in 2018. The only primary silver miner that saw an increase in yield was Hecla. Mainly due to Hecla’s Greens Creek Mine, the company’s average silver yield increased from 10 to 11.5 oz/t during the same period.

The world is running out of its HIGH-GRADE, easy to get to silver deposits. While there are still some high-grade silver deposits still remaining in the world, the primary mining industry continues to BURN through its better quality reserves. At some point, production from these top seven silver mines will no longer be able to offset the declines from falling ore grades.

Investors have no idea what a deal they are getting in acquiring silver for such a great deal when we compare it to most of the over-valued financial paper assets and real estate. The few silver miners in the world may just surprise the market when investors begin to move into them in a BIG WAY.