We are reading now about possible regulations for air travel. In brief: passengers might be forced to spend hours at the airport. Authorities will perform medical checks, including possibly needles to draw blood, no lounges, no food or drink on board the plane, masks required at all times, and even denied the use of a bathroom except by special permission.

We would wager an ounce of fine gold against a soggy dollar bill that people will hate this. The majority of vacationers will not want to fly. A holiday is supposed to be fun, and air travel promises to be a lot less fun that it was in March.

Even business travel will be discovered to be a lot more discretionary than previously believed. Forgetting continuing education and conferences chosen in tourist hotspots such as Las Vegas and Maui, even business meetings may be done remotely (they already have been, for three months).

Going farther, we would expect major corporations to set policies that employees will not be required to travel except when specifically directed by a senior executive. No large employer would want to face a wrongful termination lawsuit from an employee who balked at being stuck with a needle.

If air travel is only for people who absolutely, positively have to visit faraway places, it will be a much smaller market than it was. This will have some big consequences.

The airlines have far too much capacity. They must break leases on their gates at the airports (as will rental car companies). This means that the airports will find they cannot service their bonds.

Likewise the restaurants and stores in the airports—which had increasingly become like malls in many places—will break their leases and default on the loans they used to pay for their buildouts.

The airlines will have to try to liquidate large numbers of airplanes. There will be no bid on most of them. Newer aircraft, with more efficient engines and more attractive interiors, will be retained. The others will go off to the boneyard. The bonds that financed all of this now-excess fleet will be defaulted.

The pain will fly up through the ecosystem. The airplane food service companies will be toast. The vendors that service soda fountains and refrigerators in restaurants in airports will freeze. Even the businesses that stand up racks of magazines at airport newsstands will fall over. Loans on the trucks, scissor lifts, and industrial kitchens will not be paid.

Moving farther upstream, what are the prospects for the manufacturers of airplanes, specialty airport service trucks, and scissor lifts? What of their parts suppliers? If any of those companies has debt, it will be defaulted.

Moving on to other parts of the airport, there are monorails that will seize for lack of demand. There are parking garages that will collapse for lack of cars paying $25 a day to park. Cleaning companies will kick the bucket.

Once passengers land, they travel by rental car, taxi, or Uber to a place where they can sleep. Usually a hotel. Hotels that depend on air passengers for a majority of their revenue—how many serve mostly people who drive?—will soil their beds one final time before they go off into the great goodnight.

A whole slew of upstream vendors, from carpet installers to plant nurseries, to colleges that turn out graduates in restaurant and hotel management will go down the river.

This leads us to the convention centers. Even if the airline business was not a lead balloon, the convention—which is pretty much the opposite of social distancing—would still be a dead letter.

That means the companies who sell the paraphernalia for trade shows, like printed brochures, will fold. The manufacturers of exhibit booths will drop, the silkscreen companies who put corporate logos on pens and shirts will see red ink, and even the businesses who make the lanyards will be ripped up. Lighting companies will collapse like overloaded trusses.

There are many more companies not mentioned, and we could go farther upstream. But we will stop here, because we don’t want to belabor the point. We went this far, in order to paint a clear picture. There is a common element in every sad story above. No, it is not layoffs (though those are a human tragedy). Nor a drop in quality of life (which has already occurred).

We speak of bond defaults.

Many people may not care, because they do not own bonds. However, they should care if they have a pension, insurance policy, annuity, or a bank account. Institutions buy bonds, and now we are headed into unprecedented bond defaults.

The answer is as obvious as it is painful. Some of these creditors will, themselves, default If their asset goes *poof* then their liability is no good either.

Some may get subsidies. Keep in mind that the Federal Reserve can lend, but it cannot gift. Congress can dole out gifts, but how much can they get away with until voters get sick of it? We suspect far less than the amount needed to cover all this bad debt.

To a creditor, the loan is an asset. When it defaults, the asset loses value. The creditor cannot replace this asset by borrowing. If it borrows, then that loan would be a liability. Adding a liability does not fix the problem of losing an asset.

Pension funds may not be allowed to reduce the checks they pay to retirees. Instead, they will turn to employers—such as airport operators and scissor truck manufacturers—to pay more and attempt to shore up these underfunded funds.

With their revenues dropping sharply, and debts of their own to try to service—not to mention laying off employees—these entities are fighting to avoid bankruptcy. Or they may already be in bankruptcy courts of their own.

The employers do not have nearly enough cash to make good on these pension obligations.

This is part of why we say the dollar is supported by the struggles of the debtors. Any analysis that begins and ends with quantity of dollars misses the quantity of debt, and the burden of every dollar of it rising with the falling rate of interest.

These banks, insurers, and pension funds—and their unhappy clients—will not be running out to spend trillions, bidding up consumer prices, and causing what most people think of as inflation. They will be cutting their consumption of real resources—including the paychecks of employees who consume real resources—in a desperate attempt to stay afloat.

The world is not dying the white hot death of nuclear explosion hyperinflation. It is dying the cold, dark death of drowning under a rising sea of debt.

Let’s revisit the silver basis. Once, a conspiracy believer said about our basis indicator that it is “technical analysis.” Like it’s nothing more than just looking at past prices in an attempt to predict future prices.

The market action this week shows otherwise. The move in the basis is more obvious, with the market makers (temporarily?) derelict. The price of the metal went up just over a dime. And the basis went up from 4.8% annualized (September contract) to 7.2%. That is, from 25¢ to 35¢. 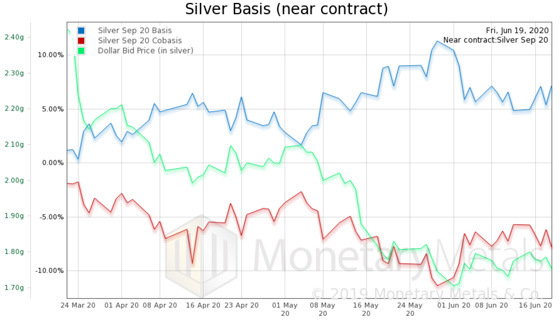 The basis is just the difference between the price of a futures contract and the price of metal in the spot market.

We can see directly that the price action this week was driven by buying of futures. It does not get any clearer than this.