$10 Silver Certificate Would Buy $333 Worth Of Silver Today

A $10 bill today doesn’t buy as much as it used to. Yes, indeed… the $10 Federal Reserve Note today would only buy a little more than a half-ounce of silver. However, back in 1934, a $10 Silver Certificate would purchase 18.5 ounces of silver. Try doing that today.

According to Kitco.com, the price of silver in 1934 was 54 cents an ounce. That was a pretty good price for silver because it more than doubled from its low of 25 cents an ounce two years earlier in 1932. When silver was trading at 54 cents an ounce in 1934, the U.S. Treasury issued $10 Silver Certificates:

The following chart shows how much silver a $10 Silver Certificate would purchase in 1934 versus a $10 Federal Reserve Note today: 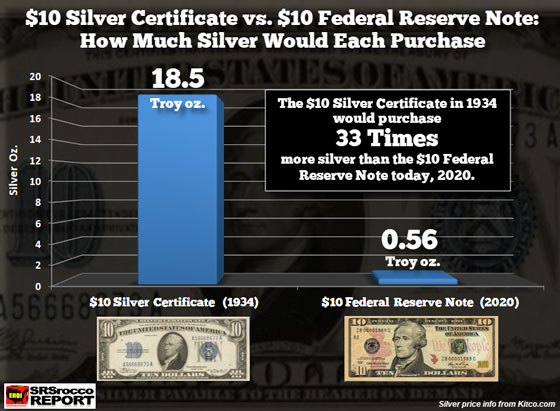 An American would receive approximately 18.5 ounces of silver for redeeming a $10 certificate in 1934. However, if U.S. citizens wanted to purchase silver on the open market with a $10 Federal Reserve Note, they would only receive 0.56 ounces of silver. 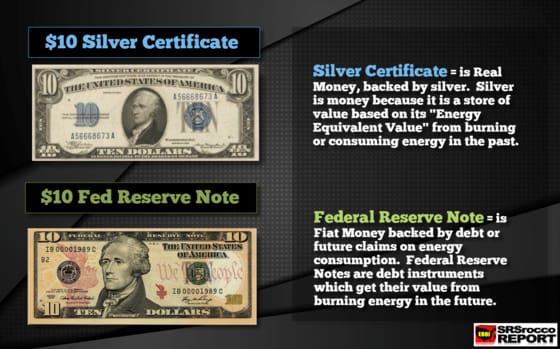 Since the global contagion hit the United States in mid-March, total U.S. Public Debt has increased a stunning $3 trillion. So, in a little more than three months, the U.S. Public debt increased more than the $2.7 trillion for 2018 and 2019 combined.

While the paper gold and silver prices may decline along with the broader stock markets temporarily, I believe we are going to see PHYSICAL INVESTMENT DEMAND as we have never seen before. At some point, physical investment demand will be the leading driver of the silver price.

I caution investors who are putting most of their funds in paper silver assets (not including mining stocks). Silver ETFs and Futures on the Exchanges should only be used (by professionals) to “TRADE” silver, not to STORE WEALTH.