When the results are released, the second-quarter economic data will be the worst on record. With the massive money printing by the U.S. government, public debt has ballooned more than $3 trillion since the lockdown of the domestic economy. The total U.S. public and private debt will likely surpass $80 trillion in Q2 2020.

Here is my last update for the U.S. Total Debt All Sectors versus the GDP, for the beginning of 2019: 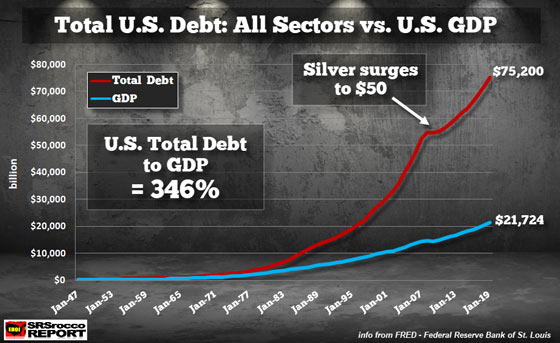 You will notice that since around 1970, the Total Debt has increased a great deal more than the GDP. I believe this was due to the peaking of U.S. conventional oil production. As U.S. oil production peaked and declined, the U.S. funded their economic growth more with debt. Now, we can see that the debt is moving up exponentially while the GDP will start to flatten and decline.

This is terrible news for Americans who hold most of their wealth in STOCKS, BONDS, and REAL ESTATE.

Got your physical Gold and Silver?