How High Will Silver Go?

The torrid rally in the silver market reached a major milestone this morning as prices hit $21/oz.

On Monday, the Silver spot price tracked by Money Metals Exchange closed at $20.12 (the futures market price settled at $20.19).

The white-hot silver market is busting through some resistance levels that should clear the way for higher highs ahead. Silver prices traded up Tuesday morning to $21.21 oz.

How high will silver ultimately go? 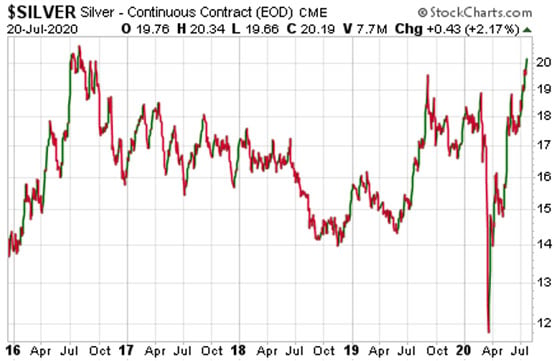 Technical traders believe that a decisive break above $21 will send silver zooming up to $26 over a relatively short period of time. If silver breaks above $26, then prior highs come into play, including the all-time high around $49.

In terms of U.S. dollars, there is no particular upper limit since the currency is under a continuous devaluation campaign. The value of the dollar might only depreciate at about 2% per year as “targeted” by the Federal Reserve.

Or it could at some point begin to depreciate a much more rapid pace, sending silver and other hard assets much higher in nominal terms.

Silver could, however, become overvalued in real terms – that is, too expensive relative to other assets including gold, copper, real estate, and stocks. It could happen down the road… but not anytime soon.

It was only four months ago that silver was fetching a historically cheap price in real terms. It traded its largest discount to gold on record and its lowest level relative to the stock market in a generation.

Since then, silver has shot up 75% – from just under $12/oz to $21. That near-vertical rate of ascent can’t be sustained in perpetuity. The market will eventually have to pull back and cool off before re-launching into a new upleg.

However, investors who are hoping to be able to accumulate more silver at lower prices won’t necessarily get that opportunity. The market could well spike to $26/oz on momentum buying before suffering any significant retracement.

When silver crossed above $20/oz four years ago, it didn’t stay up there for long. Some additional back-and-forth between bulls and bears could be in the cards before sub-$20 silver is finally a thing of the past.

The good news for bulls is that there appears to now be strong support within the former resistance zone of $18.50-$19.75/oz.

When that range is viewed from the perspective of downside potential versus a long-term upside target at the former all-time high of $49.50/oz, buying silver in the low $20s still represents a favorable risk/reward opportunity.

Of course, many silver bugs are eying triple-digit prices in the bull market ahead. Silver could conceivably hit $100, $150, or even higher levels on fears of physical shortages or a currency crisis.

One thing that is guaranteed in the silver market is volatility. Riding out swings in silver prices is like saddling up on a wild, untamed horse. It will try to throw you off at every turn.

The classic TV series “The Lone Ranger” featured a hero who rode on “the thundering hoofbeats of the great horse Silver.” Famously, the Lone Ranger would intone, "Come on, Silver! Let's go, big fellow! Hi-yo, Silver! Away!"

Silver investors who are able to hang on to their position – and add to it when opportunities present – will be saying “Hi-yo, Silver!” too as prices move to higher highs.

The Lone Ranger carried actual silver bullets as symbols of his steadfast pursuit of justice against evildoers. Similarly, gold and silver coins are symbols of the justice of sound money against the evils perpetuated by politicians and bankers who control the fiat monetary regime.

What will win out ultimately is economic reality. The forces of supply and demand are much like the immutable laws of nature.

They exert pressure on prices regardless of our wishes or moral considerations.

Some investors will benefit while others will get hurt from the price trends ahead. If unprecedented levels of government stimulus and Federal Reserve currency creation begin to produce higher rates of price inflation without generating real economic growth, then stagflation could be a portfolio killer for conventional stock and bond allocations.

If stagflation contributes to rising safe-haven demand for precious metals – which are currently facing supply challenges thanks to COVID-related shutdowns of mines and refineries – then physical silver could prove to be an ideal portfolio diversifier.

We’ve already seen some of silver’s explosive price potential exhibited this year. Even bigger moves are likely still to come.