With silver breaking out decisively to the upside, bears are running for cover.

We had noted in our July 13th News Alert, “We are paying especially close attention to the bull vs. bear tug-of-war in the silver market around $19/oz. If the bulls yank prices decisively above that level on a strong close, short covering by capitulating bears could help drive a powerful breakout rally.”

That’s exactly what happened. The rally really accelerated once the $20/level was taken out last Monday. The bears have capitulated big time!

Also being forced to re-think their positions are gold-only bulls within the precious metals camp. Although they represent a minority viewpoint, some stubbornly cling to the view that only gold is sound money. They view silver as an industrial metal and tend to shun it as an investment.

The gold-only bugs felt vindicated in March when the gold:silver ratio shot up to over 120:1. But as we argued at the time, the unprecedented cheapness of silver versus gold represented a once in a lifetime opportunity to buy silver.

The white metal has since outperformed gold dramatically, causing the gold:silver ratio to fall precipitously. So far it has only fallen to what in years past would have been a high point in the range. 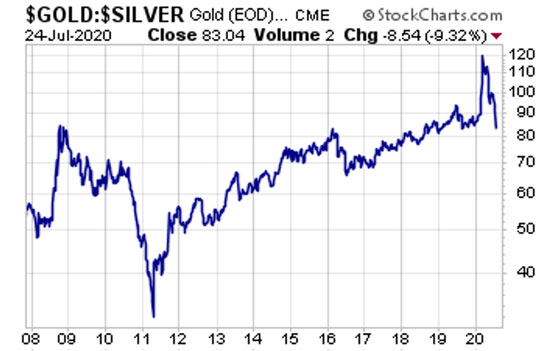 Silver has much more room to outperform. We think the gold:silver ratio can continue to fall in the months ahead, though not necessarily at the current pace.

Fundamentally, the character of both the silver and gold markets has changed during the course of this year’s rally. Retail bullion buying is not only back; it’s going through the roof!

Many dealers are struggling (and failing) to keep up with demand. We are working tirelessly to procure ample inventory and fulfill the truly massive amount of orders that continue to pour in here at Money Metals Exchange. Our staff is working 7 days a week to keep orders moving out the door more quickly.

As a result of the surge, available inventory of silver coins, bars, and rounds have become tighter as we’ve moved through July, driving up premiums once again. The greatest challenge has been privately minted bars and rounds, with mints backordered by several weeks in most cases. Even the acquisition of silver grain and 1,000 oz bars for minting purposes is becoming an issue.

ETF holdings of gold assets have risen for 18 straight weeks – the longest such streak since 2006.

Another bullish factor was actions by Sprott Physical Silver Trust, a closed-end financial product that holds a fixed amount of silver. It recently filed to expand its asset base by up to $1.5 billion, which represents close to 65 million ounces of new silver. That’s equivalent to almost 8% of annual silver mine production!

Silver is a smaller market than gold in terms of the value of total consumer demand for jewelry and bullion. It therefore has the potential to move more dramatically at the margins in response to increases in demand and/or shortfalls in supply.

Silver naysayers could be left speechless by the price moves still to come as the realities of rising physical demand and an intractable mining supply deficit forces the market to find a new equilibrium.